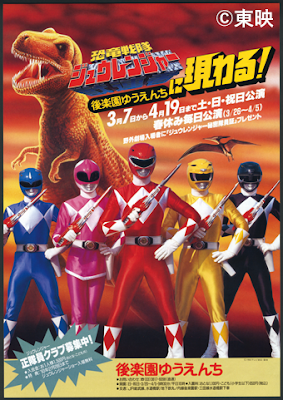 This is a long time coming for me, the first Super Sentai I ever watched and the one used for the first season of Mighty Morphin Power Rangers. The first of many Dinosaur themed Super Sentai and one during the darker writing area of the franchise. I have seen this before, but a refresher sounds nice. Click "read more" and let us re-live this classic.

The episode begins, with the theme song! Afterwards, we meet a friendly old groundskeeper watching a news report about some kids going into space with astronauts to Planet Nemesis which is approaching Earth after an orbit of around 230 million years. That sounds like important research, why are kids there?

If Japan ever had a "young astronauts" program I want to know.
The astronauts land on Planet Nemesis, find the dumper and open it which frees the main villains led by Witch Bandora. 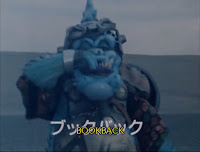 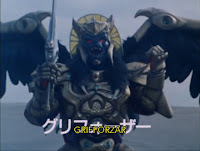 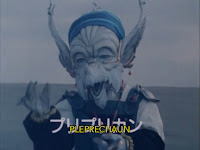 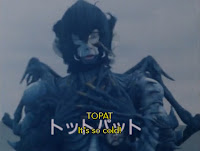 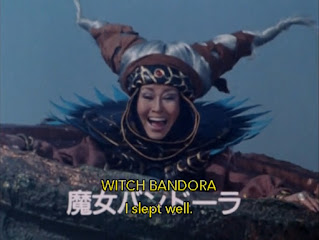 Bandora sends the astronauts flying into space and vows revenge on Earth for her imprisonment. Suddenly, tall building in the of the city that the groundskeeper was in begin moving around and one of them flies into space. It then comes back with Bandora's Palace on top of it. Bandora and Grifforzar come flying out of it to give their introduction and warning to Earth. 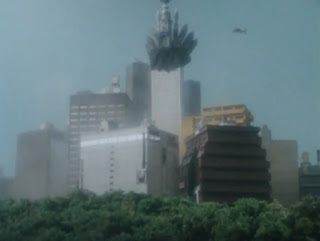 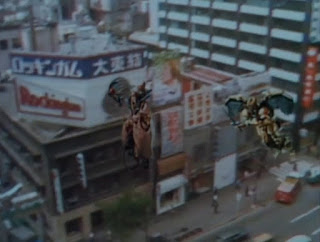 Fun fact, the actress for Bandora actually had to ride that little bike at high places in order to get these shot. But, dated effects.
Bandora then confronts the groundskeeper who reveals himself to be the White Sage Barza. 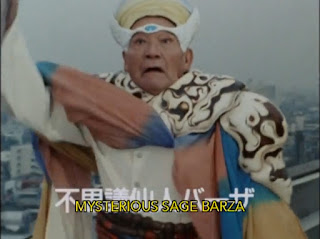 Barza can't compete with Bandora in a one on one magic fight but still attempts to fend her off. However, Bandora reveals that she still has the two child astronauts trapped in a shrunken down space shuttle because Bandora hates children. 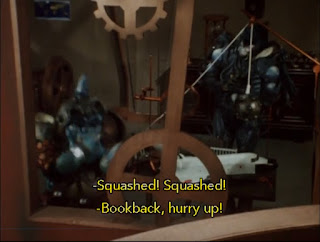 It's coming back to me now. The overuse of kids was the weakest part of this Sentai season.
For some reason, Bandora does not kill the kids right away but gives Barza 1 hour to try and free them. This prompts Barza to unleash his own secret weapon, re-awakening the Zyurangers from suspended animation in a secret underground base. 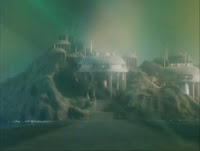 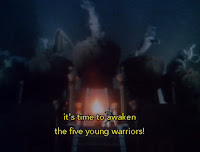 From here, there are 5 doors and 5 colored keys that awaken the legendary warriors. Black, Blue, Pink, and Yellow all open without problem, but the Red key brakes upon trying to open the door. Thus, 4 of the warriors move out while the 5th is delayed. Barza tells the pink one there is no time to put on makeup. Sexist moment! These 5 are not rangers yet, but the theme song already showed they will become them and the 4 that emerge do an unmorphed roll call.. Ranger Role Call!

MammothRanger Goushi - Sharma Tribe Knight, Warrior of Wisdom. The calm and wise type. He acts as the voice of reason for the group and fights with an axe.

TriceraRanger - Dan. Etoffe Tribe Knight, Warrior of Courage. Young at 19 and lacking discipline. They try to present him as the overconfident one that rushes in, but this rarely comes up. Fights with a spear.

TigerRanger - Boi (Boy). Sharma Tribe Knight, Warrior of Hope. Yes, the original yellow rangers counter part was a boy named Boy haha. He is the other young energetic one at 15 who serves as the curious beaver of the group and sometimes gets paired with Mei to do less interesting tasks like watching sick kids. Fights with twin daggers.

PteraRanger - Mei. Lithia Tribe Princess, Warrior of Love. The one girl and another victim of the Sentai writers not super interested in the female rangers besides showing off leg. (Sun Vulcan didn't have a female ranger and ratings dropped so now every season has at least 1.) Her being a princess never comes up in story context and she exists to be the sweetheart of the group whom is always the one to watch over the children while the others go fight. Fights with a bow and arrow.

TyrannoRanger - Geki. Yamato Tribe Prince, Warrior of Justice. A very righteous person who easily gets the most development of the core 5, especially with the future 6th ranger. tbc. He his your fearless leader who gives heroic speeches, but still succumbs to his emotions from time to time. Fights with a sword.

Likeable characters, but can feel stock. Room for growth, but a lot of development is wasted on random kids in his season.
Generally, there are 4 ways we see rangers become rangers with some seasons combing 2 or more:
A. They are recruited/pushed into it because they are some form of chosen one.
B. They earn the ranger from hard work and training
C. It is completely situational like there was no one else around or they got their powers by accident and are stuck with them
D. Finally, they were already rangers prior to the season and more details on the how
This season is a combination of B and D; mostly D as they are already warriors but are still shown being given their powers. Which one works the best is up for debate, but it is a fun analysis to bring up. Personally, I like B the best.
Goushi, Boi, Mei, and Dan race onto the battlefield with their motorcycles while Barza tries to get Geki's door open. They try to break into Bandora's palace, but are teleported to a beach where there is a sneak attack from this seasons foot soldiers, the putty patrol Golems. However, this situation only grows worse as Bandora uses her magic to distort reality around them and cast attack spells. 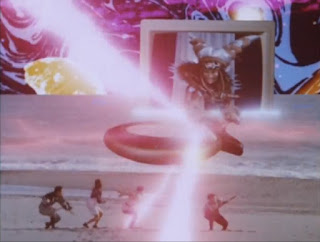 Wow, I miss it when villains felt like genuine threats.
The 4 warriors end up captured in a cage where they are spun around open flames to be barbequed alive while the captured children's time almost run out. All hope seems lost, until the Tyrannosaurus spirt awakens Geki just in time for him to show up and save his comrades from doom. 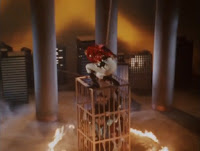 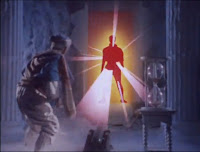 Now that is how you introduce a red ranger!
Out of the cage, the 5 of them together begin battle with some Golems and Grifforzar and are doing pretty well against them. I appreciate a ranger who can fight without their Ranger Powers. Shortly, Barza calls them all outside and sends them their Dino Medals which allow them to transform into the Zyurangers and resume combat. Sadly, this season lacks a proper henshin sequence.

As the fight goes on, Dan and Mei are sent to go after the trapped kids while the other 3 finish the battle. The two of them manage to pull the children out of harms way in time, but a giant appears snatch them back.
How does this look so much better than the CG they would have used today?
The situation looks bad but the Zyurangers are not backing down. And, the episode ends there on a cliffhanger. TO BE CONTINUED!

This episode was non-stop action and a lot of fun, but felt a little short. I am not sure why Sentai seasons from this time-era have a 20 minute run-time instead of the 24 that seasons prior and after have, but that is probably some Japanese TV trivia. Fight scenes were not overly complicated, but they were satisfying especially since we got to see the team fight before they got powers. Special effects are dated and the characters were not fully introduced, but there is plenty of time for that. The only real problem I had with it was the children in distress. It made no sense why they brought 2 kids into space and having the whole plotline revolve around rescuing them felt like forced drama. Despite that, it was still a very enjoyable experience and a nice showcase of stakes that I miss from classic seasons. 4/5
Posted by Cendoo at 12:00 AM