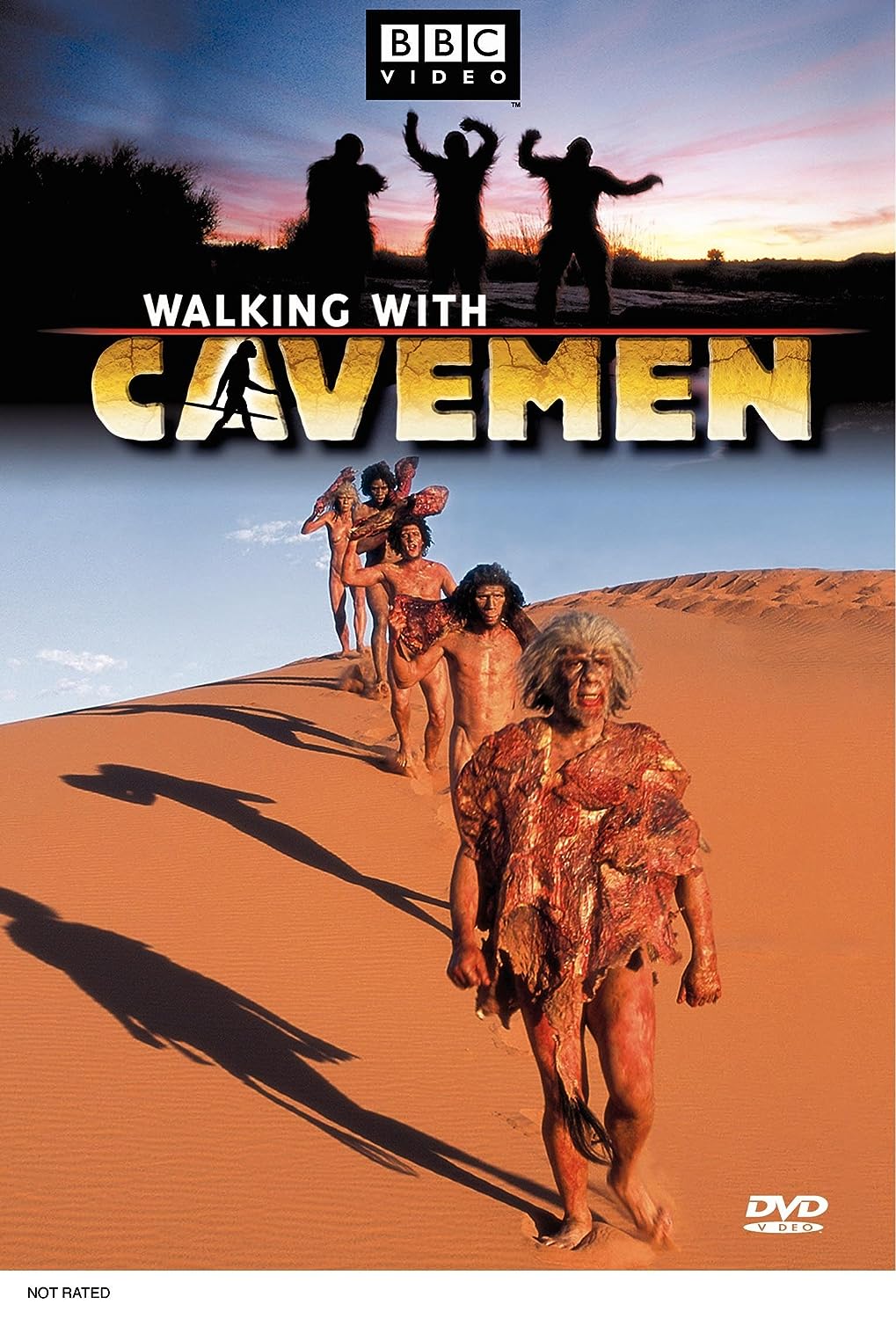 At long last, we come to the final of the Walking with... documentaries, not including the specials (like Sea Monsters) or more child-oriented programming.

Walking with Cavemen, as you can imagine, turns its focus largely on the evolution of man. Using many of the same techniques and filming methods employed by the rest of the franchise to explore the lives of the various hominids which called Earth home before modern man, Walking with Cavemen stands in my mind as something as an outlier and oddball among its fellow series.

As I will go into further detail in the actual review segment, Walking with Cavemen makes a few changes to the overall formula that really bother me, despite my love of the subject at hand. Despite a good narrative angle for the documentary, there is only a single massive element which keeps this film from being regarded as equal to the rest of the franchise.

Walking with Cavemen is a sequel to the BBC's widely successful Walking with Dinosaurs and Walking with Beasts, this time with a focus on the evolution of humanity from our earliest hominid ancestors. Produced by a different production company and utilizing more practical makeup than computer generated imagery, Walking with Cavemen explores what precisely it means to be a modern human being by exploring what existed and was missing from our genetic ancestors. From the bipedalism of Austrelopithicus to the cave painting of Homo neanderthalis, we watch the day-to-day lives of these incredible creatures that we call our relatives.
***

Going to be totally honest with you all. I'm not actually all that crazy about this particular series. It's not terrible as far as documentary series go, in fact I would actually say that it is quite good compared to many of the other prehistoric documentaries seen on CuriosityStream. However, Walking with Cavemen suffers in my mind from one underlying element that really keeps me from praising it as much as the other Walking with... films.
The decision to portray the hominids, especially in the early episodes, as practical costumes rather than CGI. This isn't quite a big deal in the last two episodes when most of the hominid ancestors look essentially human, but in the first two episodes...we get a bunch of people in obvious gorilla costumes. Now a lot of this I understand is a product of CGI in the early 2000s not being very good at texturing hair (Monster's Inc came out in 2001 and much of its technology was still very limited for a BBC documentary) and a film about human-looking primates was going to be difficult to escape the uncanny valley on principle, but its almost distractedly bad at points.
Due to a lack of dialog beyond narration, which is done quite well I will admit, this style of pseudo-nature documentary has always been heavily reliant on the visuals to tell their stories. And given the strong presence in the uncanny valley that this series stays in for much of the early series, Walking with Cavemen ends up being held down on its visuals almost on their own.
This is really a shame because I think the overall focus and angle that the "narrative" of the documentary is actually incredibly strong. While the series largely focuses each episode on the daily lives of the various hominid and primate species that lived on Earth during the last 5 million years, the overarching narrative is the pondering of what exactly makes a modern human being. Each species of hominid that we the audience are introduced to is shown to have elements of their existence that shares some similarity with us. Good examples include bipedalism, omnivorousness, and language. However, each creature is always found to be lacking in some important feature that the next creature in the "evolution" of humanity seems to possess.
Of all the episodes, I think the second episode "Blood Brothers" is very fun for its running mystery as to which of the three hominid species we are introduced to is actually our ancestor, if you can get through the bad gorilla costumes. Episode 3, "Savage Family" is also cool because it is the first episode where you can really buy into the idea that these creatures are supposed to evolve into human beings, as the series finally dumps the bad costumes.
It is also in Episode 3 that the fantastic score I think really comes into its own, as the visuals and landscapes finally line-up with expectations. The Walking with... franchise has always had absolutely stellar music that fills the audience with a sense of awe and spectacle and here is no different. The visuals of Homo ergaster, the ancestral humans, running through sand dunes with a soaring orchestra behind them is a very powerful image.
In summation, I think Walking with Cavemen is a very ambitious project that failed largely on a limitation of technology. I think that if this series were remade with a Hollywood budget and the texture quality of modern CGI, Walking with Cavemen could become as highly regarded as its fellow pseudo-nature documentaries.
I think, now that I have looked back on the entire Walking with... mainline series, that I really want BBC to remake this franchise with modern effects and with the new knowledge that we now have about many prehistoric creatures. I think that if we could have a larger focus on the Paleozoic Epoch (maybe even going to greater detail about even earlier eras like the Ediacaran, which has never been portrayed on film), a better utilization of texture graphics to show feathers on dinosaurs and good looking humanoid primates, that a revamped and modernized Walking with... franchise could become a smash with audiences all over again.
The paleontological profession has always lived and died on the portrayal of prehistoric creatures in media. I grew up on Jurassic Park and Walking with Dinosaurs and this inspired my love of not only dinosaurs but media as well. I would absolutely love for a whole new generation of children to be inspired to explore natural history through these films.
One can hope I guess.
VISUALS
SOUNDTRACK
PRESENTATION