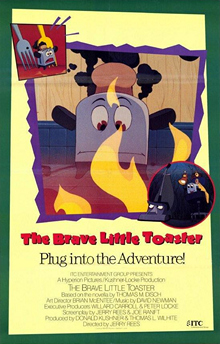 Alright everybody! With my June break beginning next week, I've decided that the final article before then will cover a film which played a critical piece in my childhood. After that, I will take about 4 weeks off to prepare for conventions and building a stockpile of new articles before releasing my very first Patron-requested article on the First Friday of July, so its going to be a very excited moment.

As stated earlier, today's article is going to be covering a film which was a beloved part of my childhood. While I have previously spoken about films like The Lion King and how important they were, The Brave Little Toaster from 1987 is perhaps a film that is less remembered as its contemporary animated films, being released at the tail-end of the Disney Renaissance, when Disney had its first real hegemony over the industry since the death of Walt Disney. As a result, the film isn't really spoken about like other lesser-known animated films from the same era.

But for kids like me, The Brave Little Toaster and A Goofy Movie hold a truly exalted part in our childhoods and I'm going to take this opportunity before my Summer Break to geek out about how fucking awesome my childhood movies were.

With that out of the way, let's dive right on in to the 1987 American-British animated musical The Brave Little Toaster.

Years after being abandoned by their "Master", a young human boy who used to play with them, a group of sentient appliances led by Toaster make the decisions to leave their abandoned cottage and brave the perilous wilderness of the outside world in search of him.
Little do they know that "Master", now a grown man preparing to head off to college, is not to far away from them and is looking for them as well. Now Toaster and his friends must deal with lightning storms, a crazy store owner, a band of jealous modern appliances, and a battle in a junkyard to be reunited with their owner.
***

Growing up, I was always aware that The Brave Little Toaster, while advertised as a Disney movie, was a little darker than your average Disney fair from that time period. As an adult, I really have come to appreciate how subtly demented this film is and its concept as a whole and I absolutely love it. In a lot of ways, this film reminds me of films like Toy Story where we cover the lives and livelihoods of inanimate objects and their connections to their human owners. This is an especially interesting connections when you realize that many of the staff that worked on this film also went on to work for Pixar and created Toy Story about a decade later.
When recalling this film, I am immediately drawn to the voice actors and the music, the sound in this film is really something else and helps to bring you into the emotions of these characters. The film is incredibly 80s in a fantastic way. Even as I am writing, my mind is jamming to the numerous musical numbers throughout the film, all of which are just amazing. Though I do have to say that the final song in the film, "Worthless" is a real head-bopper, despite the morbid subject matter. "It's a B-Movie" really gels with the horror aesthetic evoked by Elmo St.Peters' appliance parts shop, keeping it light-hearted while never fully abandoning the danger; and "Cutting Edge" fully embraces the late 80s shtick as modern appliances war against our older protagonists.
While we are mentioning sound, we gotta talk about the voice actors. Toaster, while voiced by Deanna Oliver, actually is doing an impression of Bette Davis and really forms the emotional crux of the piece through the innocent but strong leadership role she holds. We have Thurl Ravenscroft, the voice of Tony the Tiger, as Kirby, the irascible vacuum cleaner. Jon Lovitz is stunning as Radio, the trouble-making radio that has a feud with Lampy. And of course there is the most memorable character, who is ironically a minor role but important to actually jump-starting the plot, Air Conditioner, voiced by Phil Hartman but obviously an impression of Jack Nicholson who's "death" at the beginning of the film utterly terrified me as a kid.
Though not nearly as much as that fucking fire-fighting clown. Actually, let's talk about that for a second here. About halfway through the movie, Toaster has a dream sequence where he spends time with Master Rob as a child. This sequence quickly spirals out of control as Toaster begins to catch fire and threaten the life of Master Rob, only to be halted by a massive, terrifying fire-fighting clown that makes Pennywise look like the clown from Dumbo. Like holy shit, the animator really needs a fucking raise on that one because if they were tasked with making this movie creepy, they really succeeded.
Actually the entire film has a really creepy, downer vibe to it. The "death" of Air Conditioner is literally the impetus for our adventure, as the appliances get desperate to find their owner and risk the wilderness ostensibly after witnessing another appliance essentially have a heart attack on screen. The appliance parts shop is heavily implied to be the equivalent to a organ harvesting operation for appliances and the junkyard that forms the climax of the movie involves the obvious deaths of several side characters and nearly the death of Toaster and Master Rob.
Thankfully that darkness is counterbalanced by a genuinely pleasant connection that the cast has not only with each other but with their memories of Master Rob.Though Rob spends most of the film essentially just missing our main characters, you are invested in their struggle because of just how genuine everyone is. Blanky is an incredibly innocent and loveable character and the one who was most closely tied to the younger Rob and forms a sibling-bond with Toaster, to contrast the more bitter and jaded Kirby. The film relies on the interactions between the characters and even minor side characters have so much charm and personality that this film really is kind of electrifying to watch.
I feel like this film isn't really talked about very much and is almost like a forgotten classic of the late 80s. And that really is a shame. Now, I will have a countdown coming in a few months about a topic very similar to this and I can assure you that this will not be the last time that I mention The Brave Little Toaster in a review. This rather twisted but heartfelt journey of discovery and friendship is a forgotten classic of the 80s and really deserves far more credit than it has likely gotten.
VISUALS
SOUNDTRACK
CHARACTERS
STORY