This is an interesting form of DLC, one that causes a video game crossover between Viscera Cleanup Detail and the remake of Shadow Warrior. (Obviously.) Click "read more" and let's see what this combination has to offer.

Just like the main game, the story is told through mission briefings but does not have any hidden notes throughout the stage. 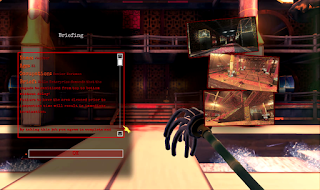 Story can be easily summed up, you are a janitor that is hired to cleanup the mansion after the events from the first stage of Shadow Warrior. In Shadow Warrior, a battle with swords and guns went down and left a big mess. Very simple plot. The only other bit of story involves the scattered cash laying around and whether or not you decide to burn it or keep it. However, that only changes a bit of text after completing the stage so it is just for roleplaying.
One thing that makes this DLC stage stand out is that it is the only level where your janitor talks. Throughout the stage, sounding very similar to the main character from Shadow Warrior including the accent, your janitor will say one-liners about the objects that you pick up. One-liners were a big part of Shadow warrior, so it is nice to get that tribute.
Overall, just like the main game and Santa's Rampage, writing is kept as simple as it can be simply because it is not necessary for this type of game.

Game play is no different from the main game or Santa's Rampage. Blood must be mopped up, bodies, weapons, mop buckets, waste bins, and broken objects  are to be burned, and there must be no trace left of the fight that took place before you arrived.

Nothing new was added to game play for this DLC, just another stage and a different office. 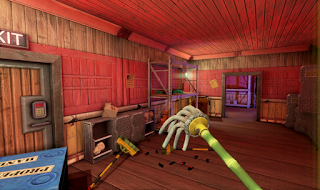 However, while this really is the first stage of Shadow Warrior, it is only a small part of the that stage. Only one building is cleaned and just 2 major areas in that plus a walkway and a couple halls. Pretty small, even for Viscera Cleanup Detail's standards. This whole DLC can be completed in roughly an hour which is honestly a bit of a wasted opportunity. 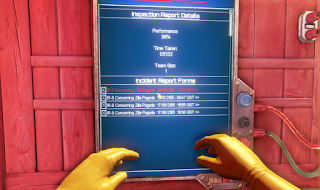 The biggest selling point of this DLC is obviously the resemblance to Shadow Warrior. The mop as a bamboo handle, the same weapons use in Shadow Warrior can be found here, and they have recreated the visual feel fairly accurately. 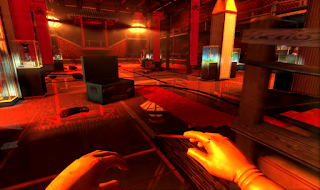 That being said, there are some noticeable corners cut. Most obvious example of that would be how small the area is. However, another less noticeable example is that fact that non of the dead bodies look like the asian assassins from Shadow Warrior and are replaced with the same generic bodies used in the vanilla Viscera Cleanup Detail. 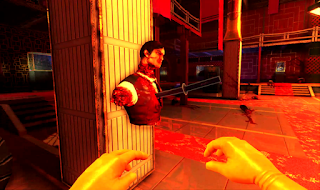 Despite these time savers, the overall feel of Shadow Warrior is there which is what matters most.

All the same sound effects are used from the vanilla game and no new ones are present. Music is an interesting thing, the radio has been re-skinned and now only plays 1 ninja-ect song with no method of stopping the music side from tossing the radio into the fire. 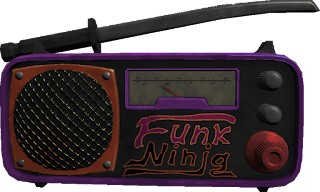 Music is not impressive, sound effects are fine, and the only other form of audio is your janitor's one liners which are quite and barely noticeable. Overall, audio is passable.

This Shadow Warrior DLC is a nice new stage to extend your Viscera Cleanup Detail experience. Admitably, it is shorter than I would have liked, but the novelty of cleaning up after another game is still there and worth it just for the laugh. Overall, I can recommend this to big fans of Shadow Warrior, and those who simply want another stage in Viscera Cleanup Detail.
Writing - 5/10
Game Play - 7/10
Presentation - 4/5
Audio - 3/5