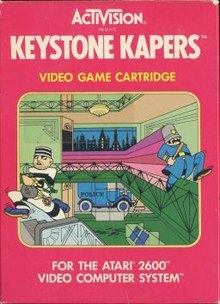 Like most Atari games, Keystone Kapers really has to be looked at in the context of the Atari era. Side scrollers were a new evolution in the platforming genre. Keystone Kapers came out in 1983. Only one year prior, in 82, David Crane's Pitfall was released and broke new ground with the platformer. Programmed by Garry Kitchen, who also programmed Pressure Cooker, Space Jockey and Donkey Kong on the Atari 2600, I see this as Garry's attempt at making a faster paced, and more liner version of the side scroller using the standard set by Pitfall.

The course is a three story building laid out with long floors which span several screens. The nature of the layout allows you to see all floors at all times, so sometimes when running left to try and get to the stairs upwards, you will see the robber running right on the floor above you trying
to get away. It is unfortunate that there is no two player mode in Keystone Kapers. It would have been fun to try and use the elevators to juke out a friend. 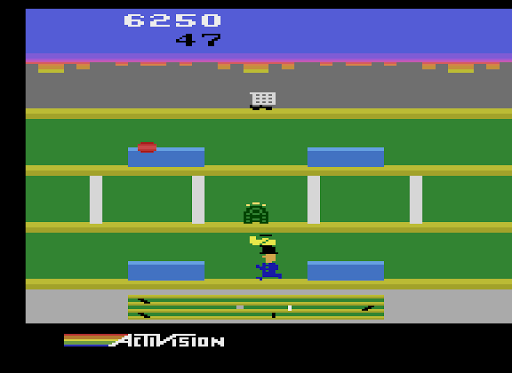 Atari Age places the rarity for this game at a "2", or if you want the alternate blue label, a "3". It's common enough that I have come across it more than once in cardboard boxes of Atari games for sale.

This is an excellent example of why using numbers to rate a game isn't a perfect system. I really enjoy Keystone Kapers, but that's because I'm already an Atari fan. Someone who has never played Atari before is likely to pick this game up and not really be able to have fun with it.

It's faster and easier to play than Pitfall, but its way more liner and doesn't have the replayability that Pitfall has. If you are an Atari fan, get it, but you will want to make sure you have Pitfall first if you don't already have it.