Time to check out episode 3 of Kiramager thanks to TV-Nihon's free fansub. Last time, the Green Ranger learned to accept Juru as the leader and now it appears it is Blue's turn to get the focus of an episode. Click "read more" and let's see how they develop Shiguru.

The episode begins in a filming studio where Shiguru is speaking to a camera crew about staying strong during late night filming sessions. This is part of his documentary. 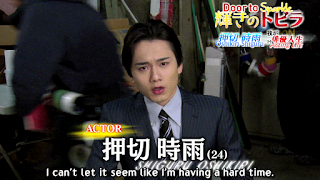 The other Kiramagers are watching Shiguru's documentary from their base and everyone appears to be very impressed with how "stoic" he sounds. Even Sena calls him the "ace of the Kiramagers". However, just to set the plot in motion, right before cutting to the intro, Juru makes a comment that being stoic all the time is not a good thing.
Juru is getting better at speaking out. Looks like this is going to be story of Blue getting an Ego check.
One theme song later, we get to see this episodes monster of the week, a safe creature named Vise Jamen. 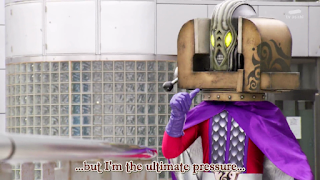 This below average costume has the ability to but vises on people that cause huge mental pressure. The vises disappear with the pain still in tact implying that it is not just going to crush their heads but also amplify any mental strains.

I have a headache just watching this.
The Kiramagers show up at this point with Shiguru still in his filming costume. They all henshin up, do their roll call, and the battle begins. It is a fairly standard fight scene with the Rangers easily defeating the grunts while showing off some marketable attacks with their weapons. Vise Jamen tries to threaten the Rangers by tightening his grip on the civilians, but quickly manage to get a shot at him and turn the crank backwards which releases everyone.
Now, Vise Jamen takes off his grip's rod and uses it as a weapon where he actually puts up a good fight. Shiguru tells everyone to leave it to him because he claims to have already learned all Vise Jamen's moves to which everyone cheers for. At first, Shiguru is winning, until he gets caught in a grip himself in a fairly lame way. With the vise on Shiguru, Vise Jamen retreats so that they won't be able to remove it.

That really ruined his cool moment.
Cutting back to the Kiramagers HQ, x-rays reveal that the vise is so tight it is deforming Shiguru's skull and he can't henshin with it on. Ouch! Despite this bad news, Shiguru still tries to play off the situation like it is no big deal and does not hurt him. The Kiramagers then try to get the vise off.

Several failed attempts later, the Kiramagers come to the obvious conclusion that they need the handle to get the vise off. Sayo has to go back to the hospital and leaves. How come they didn't try a real vise grip handle?
Shiguru is trying very hard to hide his pain when Juru finally tries to talk to him about that. Juru asks Shiguru if he really hates looking uncool and tells him that he does not need to put on a front for his allies. Too stubborn to listen, Shiguru just gets mad and even goes back to filming with the script changed to include a vise trap.
What a hot head. Also, none of the cast question the vise grip. 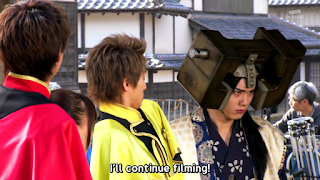 How come his vise didn't turn invisible like the civilians did?
Stakes begin to rise as a quick cut to the villains HQ reveals that the vise grip will explode and Shiguru's head is beginning to swell up. Shiguru walks to a place he thinks is hidden and lets loose how much agony he is in. However, the other Rangers minus Sayo were hiding to learn the truth. 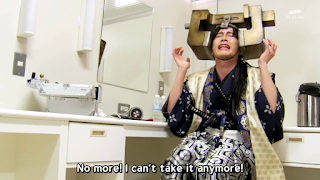 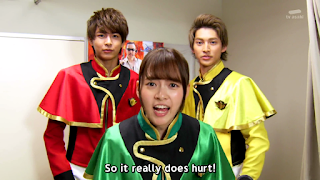 I could almost feel the pain through the cries of agony. Well acted.
Shiguru tries to return to his cool act but the jig is up. At this moment, they all get contacted about the monster's appearance. Juru tries to give Shiguru the order to stay out of the fight, he backs down after Shiguru glares at him and they all head off to battle.
Juru is making progress. But, he still does not have the backbone to be a proper leader.
Vise Jamen is torturing other civilians but is quickly stopped by Sena who also sets them free. After that, the fight continues in the traditional manner. Juru, Sena, and Tametomo are all transformed and fighting the grunts with Shiguru trying to fight un-morphed. As expected, Shiguru is pretty much useless in this fight and would have been taken out if not for Sayo showing up to protect him. Tametomo tells Juru that he needs to be a leader and pull Shiguru out of the fight because he is holding them back, but he hesitates.
The Blue Kiramei Stone contacts everyone and encourages Shiguru's cool guy behavior because it is what he likes best about him. This gives Juru an idea, instead of ordering Shiguru out of the fight, he plays off  his cool behavior by re-enacting one of his movie scenes. 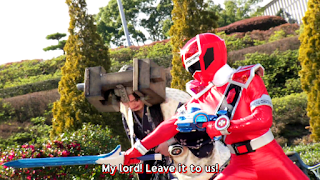 That's manipulation, at its most well intended I suppose. I'm noticing that a theme of Juru proving his worth as a leader is him not doing what others tell him and finding solutions in his own way. Not a bad idea, but I predict they will do this 2 or 3 more times which will feel repetitive at that point.
This little ploy works, Shiguru gets pulled from the fight with his pride in tact. Immediately after, the 4 remaining Kiramagers all power up their weapons big attacks and knock the handle off of the monster.
I don't see why they couldn't have done that already, but it's a little late in Sentai to question that clinche'.
Now, it is a tug-of-war over the handle, but things get complicated as the villains darkness meter fills up which summons a giant.
As a recap, the main villains build up darkness energy from human suffering which they use to summon giants to Earth. 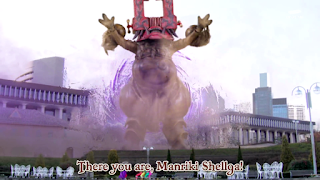 This new giant vise grip monster picks up the small one, throws the Kiramagers minus Juru away, the mechs are called, and the tug-of-war escalates. 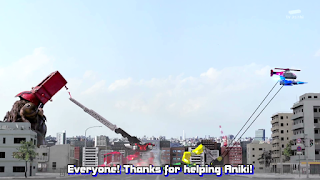 This is getting silly.
After a struggle, they finally get the handle and free Shiguru from his vise grip. Everyone cheers in releaf. Now it is time for Blue's revenge. Shiguru henshins and actually returns the handle to the monster in order to fight him man to man. Samurai pride I suppose.
It is a quick duel with Shiguru holding an obvious advantage. Not long into the fight, he finishes the job. 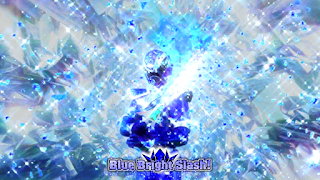 Vise Jamen goes boom and the giant battle is just beginning. They combine their mechs into Land Mage and Sky Mage and the heavy CG battle begins. Shockingly, the Kiramagers begin on the losing end. Shiguru thanks everyone for helping him and says with the 5 of them they can do anything. The machines get upset about that comment because it didn't include them. Five humans and 5 machines, this gives Juru another idea.
A simple idea, have all 5 machines combine into one Super Robo, Kirameijin. Who could have seen that coming... 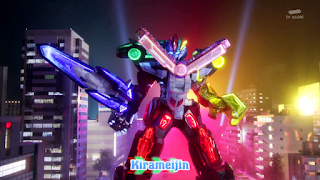 Is Green just the shoulder?
This new combination is easily able to overwhelm the monster and each colored part of the combination seems to have its own attack. They finish off the giant with a Kiramei Dynamic. (A big sword swing.) 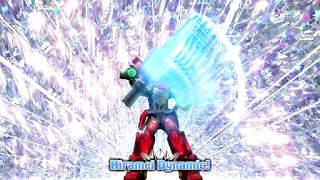 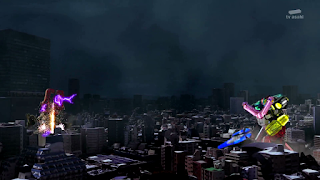 Monster goes boom and the day is saved.
The episode ends with the Kiramagers watching the new ending to Shiguru's documentary where he claims to reveal his weakness to become strong. He drops his cool act in the documentary and everyone teases him for it relentlessly. Princess Mabushina and Hakataminami praise Juru on his leadership for being able to bring out Shiguru's other face. The End!

This episode was pretty good, but nothing exceptional. It had clear purposes, to further develop Shiguru's character and to give Juru another test to his leadership and succeeded in both of them. Fight scenes were standard, the acting was good, and there wasn't anything overall wrong with this episode. This is just one of those essential character episodes that won't become anyone's favorite, but stiff felt very needed for the story. Overall, it gets a pass, and will quickly be moved on from. 4/5
Posted by Cendoo at 12:00 AM