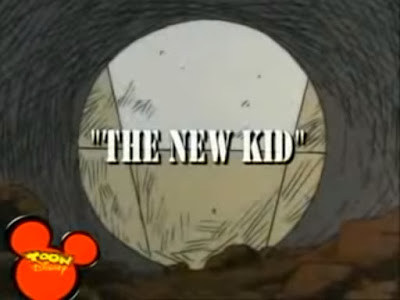 Back again with the second episode of Recess. Well, since every airing showed 2 segments in the half hour run, this is actually the second half of the first episode and it serves to introduce the 6th member of the group, Gus. Let's click "read more" and see how this episode plays out.

The episode begins with the gang (minus Gus) in class during a project about plants growth. Almost instantly, TJ gives a signal to begin a new scheme. First, Gretchen distracts their teacher, Miss Grotke, with a series of advanced Science questions. Next, with the teacher distracted, Spinelli swipes a key from her desk that opens the cage around the clock in the classroom. Finally, Mikey and a bunch of background students form a pyramid which allows Spinelli to climb up and reach the clock. Now, she moves the hands forward which also controls the schools main giant clock and makes it time for recess. 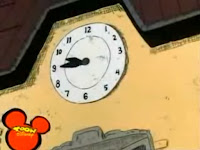 This does not make sense on so many levels. Firstly, is it even possible to have the two clocks wired together like that? Second, even if it was, why would they do that and let the 4th grade glass have a key to such a feature? Third, this affects the entire school, wouldn't someone notice the schedule being off? Lastly, that change is not going to fix itself and eventually someone will notice. Am I overthinking this kids show? Probably.
Miss Grotke, despite wearing a watch, falls for this and dismisses the class for recess. However, as the kids open the classroom door, a tall military man is standing there. He says that his son Gustav will be in their class now (using military lingo) and gives off the impression that his son is equally as tall and scary. Then, he steps aside to reveal his son, Gus. 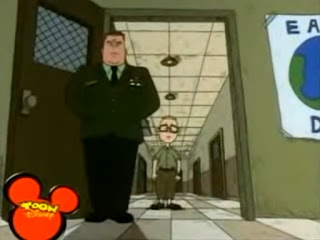 Gustav is asked to introduce himself like any new kid would be, he says his name is Gus, he's been to 12 schools in 6 years and his only friend is a pet snake. TJ and the gang take on the task of show Gus around, if not only to stop him from telling the teacher the real time.
Now, on the playground, Gus is given the introduction to how things work from TJ and the gang. Vince warns TJ about the playground taboo of talking to the "new kid" for at least 48 hours. But, TJ shrugs it off believing they can keep that detail a secret.
You know, TV shows always made it seem like the new kid was always the reject and stood out. But, I don't recall that ever being the case as a kid. Not as the new kid or seeing them. The interest usually died after a week.
The playground tour continues and Gus starts to cry because he has never had any kids be so nice to him in all 12 of his schools. Mikey and Spinelli assure him that he will always have friends there, just in time for King Bob to come marching by. King Bob notices Gus as an unfamiliar face and halts his march. Gus, not knowing the traditions, tells King Bob he is the new kid which prompts the king to summon the old new kid. Bob tells him that he is no longer the "new kid" and gives him his name back, Morris. Morris is thrilled. 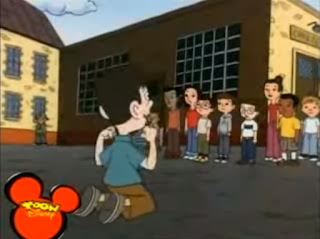 Morris got his name back but will never be plot important again.
Now, King Bob holds up Gus in shame and announces that he is to be known as "New Kid" and nothing else. The crowd cheers. Creepy thing to cheer about. 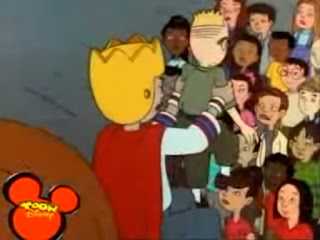 The next day of school comes and Gus is treated terribly. Kids, teachers, and the bus driver refer to him as "New Kid", everyone literally walks all over him, no one lets him set anyways except the back of the bus where it is labelled "New Kid", he does not get to play kickball, and even back home his toothbrush cup is labelled "new kid". Why?
The next day at school comes and the gang tries to cheer him up. Sadly, Gus has hit full on depression and has given up. He walks away while repeatedly saying "we're just dust in the wind". TJ comes up with a plan to give him his name back saying he has some favors to call in and he knows a lot of kids who would "do it for nothing". I find that hard to believe. His speech ends on a funny moment, TJ forgot Gus' name.
Next day, everything is reversed. The gang appear in various places like by the bus stop, on a billboard, and next to a pilot. Once Gus arrives at the bus stop, Mikey and TJ greet him while saying his name as much as possible. The bus driver comes up and also greets Gus by name and every kid on the bus does the same with friendly complements. Once they get to school, a red carpet is laid out for Gus and all the tricks are pulled to greet him. 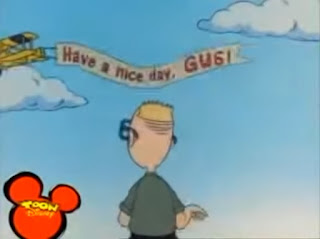 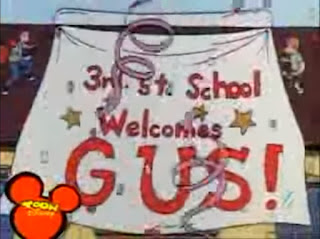 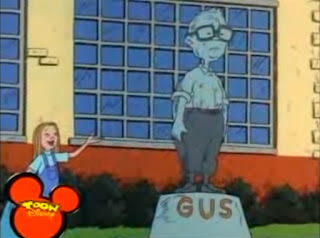 What the heck kind of favors did TJ have? That would have been a more interesting episode.
Gus begins to regain his confidence and self worth, just in time for King Bob to show up again. Upon hearing the march of King Bob, the kids quickly change the banner to a "welcomes new kid" banner, takes down the statue, and backs away from him. Gus starts asking around the fleeing crowd if they know him, then turns to the gang and asks them. TJ states, how can they know him when he doesn't, and prompts Gus to stand up to King Bob. Now, it is time for the big confrontation. 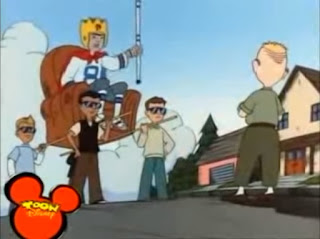 Obviously, this was TJ's plan from the start. I can't help feel he went a little excessive with it though.
Gus takes a stand and gives King Bob a big speech about how past schools mistreated him and how unfair it was of King Bob to take away his first real friends. Ultimately, Bob is unmoved and asks what he wants; Gus says he wants his name back and Bob gives it to him casually and tells him to move out of the way. That is it.

The episode ends with Gus carried off like a hero and old new kid, Morris, makes one more appliance. Morris says it is not fair because Gus only had to do it for a few days while he had to do it for 3 years. King Bob simply says that he should have said something, and leaves. The End!
I bet the gang never did anything like this for Morris.

This episode was pretty good, but a little over the top and excessive. The opening clock scheme made no sense, and the way they chose to cheer up Gus was way over the top. Despite that, it was still a solid introduction for Gus, who is the only one that got an entire episode devoted to their characters introduction. That being, aside from these first 2 episodes, (1 episode 2 segments), this show's episodes are not in chronological order so, a basic introduction is good enough as this is not meant to be a heavily story driven show. Gus simply fit the role for the topic of "new kid" and they had 1 episode without him in order to properly establish that. There is a solid moral at the end of this episode and a fair amount more of the school was introduced, mainly how quickly all the kids are to follow anything King Bob says.
Overall, I give this episode a pass. It is not my favorite, but I did not hate it either. 3/5
Posted by Cendoo at 12:38 AM