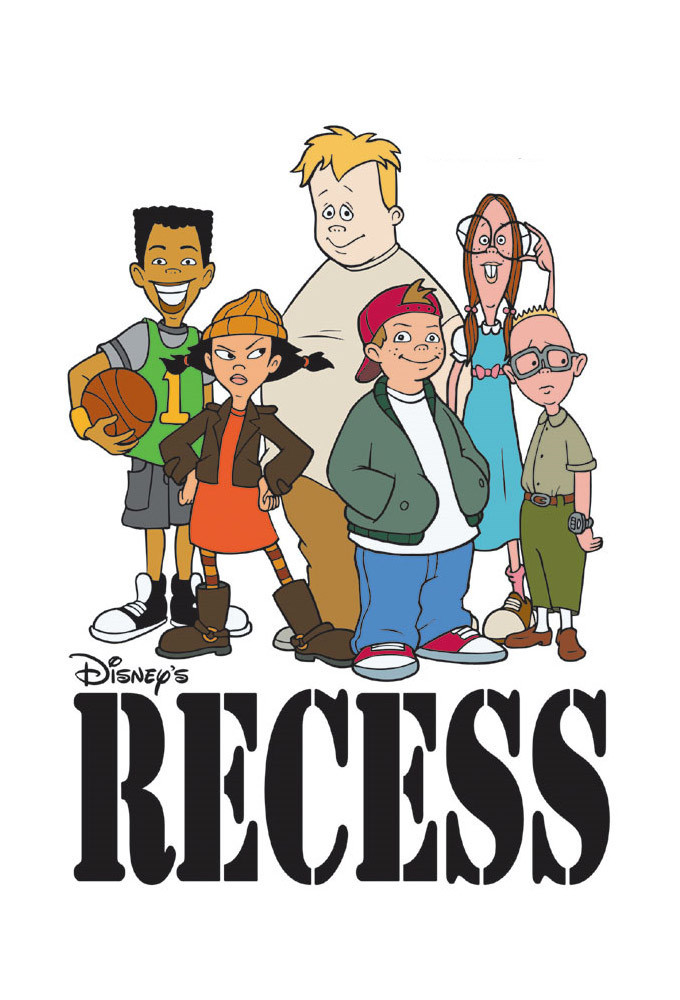 Do you ever have a cartoon where you remember loving it but stopped liking it when you grew up? This little cartoon is the opposite for me. I did not like it as a kid because of how serious it took itself and the politics, but watching it as an adult, I have gained a lot of respect for it. So, let's take a look back at the first episode, The Break In. Before beginning, I feel it is necessary to point out that this is one of those cartoons with halved run time because it showed two segments per episode. But, for the sake of writing quality, let's focus on the first in this article.

The episode begins with 5 of the main characters at lunch. Vince, the athletic kid in a jersey, Mikey the big kid, Gretchen, the brainy girl with big glasses, Spinelli the short tough girl, and TJ the boy in a red hat who leads the gang. (Gus, the 6th member, is introduced in the next episode as the new kid.) It is tomato surprise and the kids are horrified with how gross and hot it is. 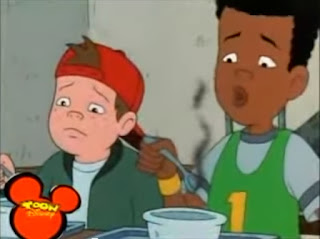 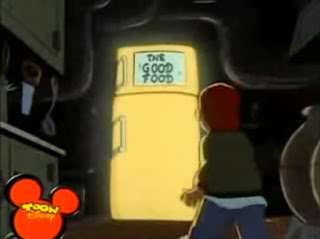 However, just as quickly as TJ finds the food, he gets caught because touching the fridge causes an alarm to go off. In an instant, TJ is confronted by the Administrative Assistant/series antagonist, Miss Finster. After this, Miss Finster decides to make an example of TJ by taking away his recess. Worst fate for a kid in this show. 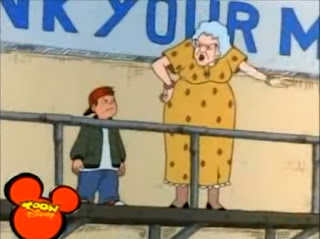 Miss Finster is the staff that is in charge of watching over recess and keeping children out of trouble. Her "villain" status is debatable as while she is harsh and strict and seems to enjoy punishment, she does not hate children.
Cutting to the playground, we are introduced to the snitch Randell who is rewarded with cookies for his snitches. More importantly, the gang visit TJ throw a window. TJ is going stir-crazy locked inside and begs the gang to break him out.

What follows are the gang asking around for help to break out TJ. This is an obvious way to introduce the supporting character. First, they talk to Guru Kid who suggests they seek help in the first place.

Next, they ask the diggers to tunnel TJ out only for them to argue and mess up the tunnel. 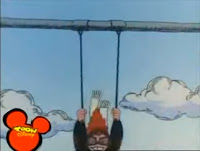 When that does not work, they look to the Swinger for help. Unfortunately, before they can ask her, the Swinger flies off the swing and hurts herself.

Getting more desperate, the gang turn to the savage kindergarteners. Gretchen tries to talk to them only for the little kids to say "let's eat em" and scare the gang away. 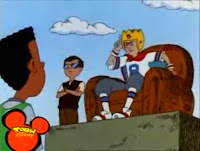 Finally, with nowhere left to turn, the gang approach the 6th grader King Bob who rules the playground through kid logic. Initially, King Bob rejects the gang because he believes himself to be too important for "some dumb kid". However, after Gretchen, Spinelli, and Mikey all stand up for TJ and give a speech about how every kid, including King Bob, is "some dumb kid" to somebody. King Bob changes his mind stating "the midget girl is right" and announces to everyone that the dumb kid should be free which causes the whole playground to cheer.
I cannot believe they got away with using the word "midget" in a childrens Disney cartoon. This was 1997 so, I cannot say I remember the standards from when I was 6 years old.
Now, every kid on the playground work together for an elaborate break out plan. They use the Swinger to  launch herself with a swing with a grappling hook onto the roof of the school where the kindergarteners use the line to climb onto the roof. After that, a group of kids including, upside down girl, lower into the building monkeys in a barrel style where they unlock the door for the gang. Finally, the melt the hinges off the door to the cafeteria using the same tomato surprise from lunch.
How? I saw it and I still don't believe it.
Shockingly, by the time the gang manage to break into the cafeteria where TJ is, he has already escaped leaving his jacket and hat behind. 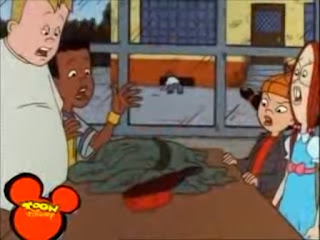 Sadly, all the effort was in vain. Miss Finster appears in the cafeteria to inform the gang that recess is over, even times the bell perfectly. TJ screams "NOOO" as the kids run inside.
Looks like the gang lose their first fight.
The episode ends after school with the gang walking home and apologizing to TJ for being too late. But, TJ is not upset, he is actually very grateful for the effort and says he has the best friends a kid could ask for. In response, the gang admit that the plot was a fun recess, but then notice they lost track of the diggers. It then cuts away to China where the diggers have broken into the wrong school, a kindergarten class in China where the little kids behave the same as their own and chase the diggers back down their whole. 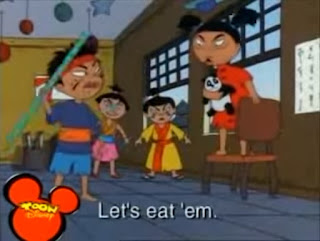 Wow, there are SO MANY things wrong with that. But, it is obviously a joke not meant to be taken seriously so, I'll let it pass.

This episode was pretty good at accomplishing everything an intro episode needs to in only 10 minutes. Most of the important characters were given a fare introduction without needing any drawn out explanation. The gang is definitely forced diversity, but at least they feel like real friends. Overall, there really is not much to say. It was an interesting choice to have the first episode end with a defeat but still have a positive note for end things. I would recommend giving this a quick look to anyone a fan of this type of writing/animation. At its core, Recess is still a kids show, but there is enough things for adults to overthink. 4/5
Posted by Cendoo at 12:00 AM