Warning: Under Party is a pretty gruesome game, with violent imagery and situations that might make you feel a little uncomfortable.  Granted, it's nothing more violent than an R18+ horror movie, but still.  You have been warned! So, don't complain! 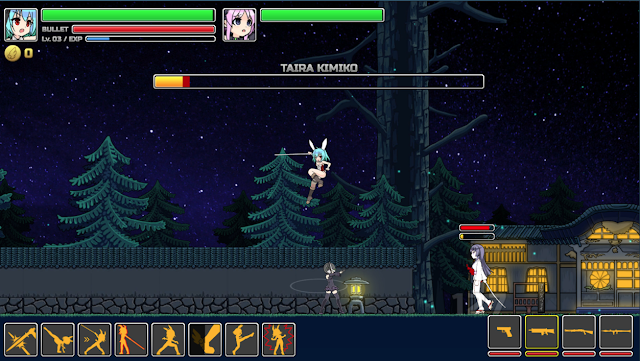 This game takes the roll of a blue haired female private detective named Aoi.  She has been hired to rescue a kidnapped woman, who has been turned into a prized item of a sex slave ring.  (I told ya that it's a disturbing game.)  Our hero tracks down the location to where this is all taking place, only to be caught out and forced to wear a sexy red PlayBoy bunny-styled outfit.  She's strong enough to fight off the goons and sneaks onto the base, only to be caught out by the ringleader, Kimiko.  Our hero wakes up to find that this isn't just a sex slavery ring, but a torture/murder club ripped right out of the movie, Hostel.

If you take the movies Taken, Hostel, and Mother's Day, mix it up with dark and violent anime based on Go Nagai's work, you've got Under Party.  It is a dark and disturbing story that's oddly intriguing.  Don't get the story (or this game) wrong, it's not designed to be a sick and twisted game to wank off to.  The point is that you want to see how the hero gets out of this terrible (that's putting it lightly) scenario and kicking the bad guys ass.

The bad things that go on (which is also putting it lightly) makes seeing the hero progress and putting an end to the evil to be a very satisfying and rewarding thing.  So, this isn't a pointless story that's designed to appeal to sickos.  Granted, due to the grisly and disturbing nature, it's not for everyone.  If you do like R18+ rated horror and cult classics, the story will appeal to you. 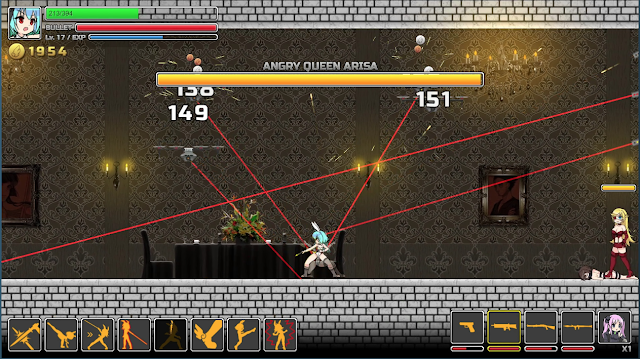 You like action platformers with plenty of large rooms, hard hitting baddies, and a lot to find?  Well, you most certainly get that.  But, if you're expecting it to be a super detailed metroidvania styled game, prepare to be a wee bit disappointed.  You will be mostly going from left to right and up and down in order to beat a room.  Don't get me wrong, I'm not saying that this is a bad system.  Just don't go into this one expecting another Castlevania: Symphony of the Night.  Expect a game that's more like Strider, with rooms that you can travel between back and forth.

The level design is fine with a lot of well placed platforms and enemies that gives this game some challenge.  The baddies hit hard and I really do mean that.  One hit and you're flying across the room.  This may seem unfair at first until you see that each enemy has a certain pattern that can be cracked, making the game more fair.  Just be warned, the enemies can go berserk in a frenzy mode.  While they are in this mode, you can't knock them down or up in the air.  This doesn't last for long, so avoid them if you can.

If you run low on health, you can find bags of blood to restore it.  What you can also do is find a payphone and this will not only recharge you, but it'll also save the game.  So answer that phone anytime you can because it will be what keeps you from getting the fatal disease of GETTING KILLED!

Beating the baddies will earn you money and experience, which is useful for obtaining new moves, weapons, and armor.  It's also incredibly satisfying beating the stuffing out of all the baddies.  With that said, combat system is easy to learn and pretty smooth and responsive.  You've got basic attacks and special ones, so the variety is there, but you don't see much of that until you've unlocked most of the moves.  How do you get them?  You've got to find shops that will pop-up here and there.  Each shop will have slightly different stock, so be careful.  The shop keeper is also Miel from the very not safe for work shmup (or a Sex 'em up in this case), Epido.  (Don't worry, the characters are of age in that game.  Do not let the questionable title fool you.)

Themes of the levels are interesting and will drive your curiosity into wanting to see what horrors happen deeper into this deep hole of horrors.  At the end of each stage there is a boss fight.  Yes, they too follow the same rule of having easy to crack patterns, but they are harder to fight.  (Rightfully so.  They're bosses after all.)  There's nothing much I can say about them other than some bosses are easy, some hard, some fun, and some not.  Most of them aren't very interesting as a good chunk of the bosses lack personality.  The ones that did, certainly helped to add on to the messed up vibe of the game.

The violence does contain some incredibly gory scenes, especially when you unlock some of the special images.  For the most part though, you'll just be shocked about how brutal the enemy attacks are.  They aren't very gory, but that doesn't stop them from being uncomfortable to watch.  The things that go on in the backgrounds are also incredibly brutal.  Featuring scenes of graphic torture and lifeless bodies that were fortunate enough to be put out of their misery.

Sadly, while I did have a lot of fun with this game, not everything is all that great.  Once you've nailed down the combat system, the battles become very repetitive and it dulls down the game a little.  You'll get sick of spamming the same combos, but you'll keep on using them because they are the most effective.

The weapons are also not the best.  They aren't very useful, take a long time to reload, and run out of ammo quickly.  I guess that's to add on to the challenge of the game, but I'm not buying that.  If you run out of ammo, you'll need to buy some more from the shops.  The shops are quite spread out from one another, so conserve your ammo.  I faired through most of the game without using them anyway.  There's only one boss fight where I recommend using them, but that's it. 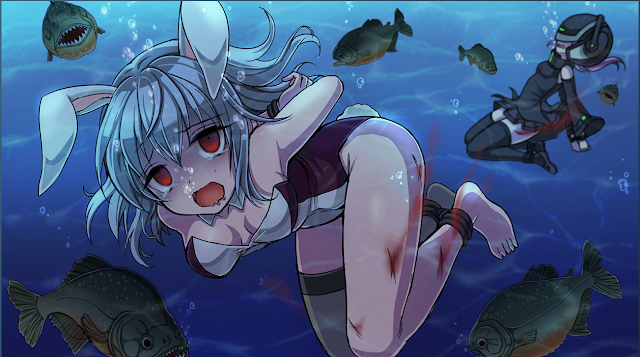 While not the most detailed in the world, the graphics look (for the most part) fairly decent with a lot of clean character and level design.  Yet, it still manages to give off a grimey, brutal, unsettling atmosphere that made me felt like that I was watching a classic grindhouse movie.  I'm just not a fan of most of the designs for the standard baddies.  They look stiff, generic and lack personality, which ruins the mood a little bit.

Animation is okay.  Walking around and jumping looks fine, but the attack animations are quite stiff.  It just jumps from one attack to another with very little animation transitioning the moves.  It's like that there were frames cut-out.  The animation does however make the ultra violence pop out big time.  The impact of the traps and enemy attacks will hit you hard and heavy, so much so that you'll ignore most of the problems with the animation. 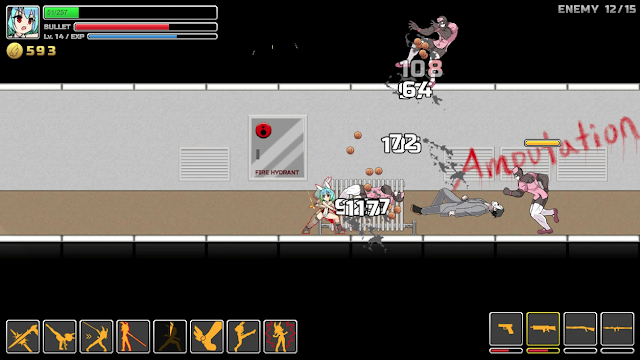 The music is dark and moody, it goes well with the game and the atmosphere.  I wouldn't say that it's the best soundtrack, or even a great one at that.  No, it's just okay and falls very heavy on the generic side.  The sound effects are also generic, but the choices of sound effects were great.  They really make the heavy hitting feel heavy and the pain sound painful. 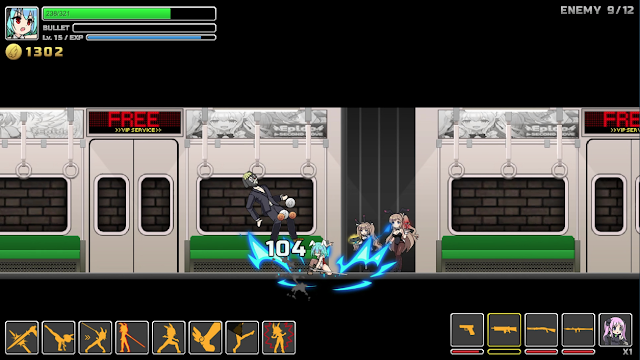 Overall, Under Party is a very well put together horror-ish platforming beat 'em up that will fill up your afternoon with fun.  You'll feel like a bad-ass after beating this.   Granted this is (obviously) not for the feint of heart and feels like watching a Video Nasties from back in the 80's.  Under Party gets a 7.8 out of 10.