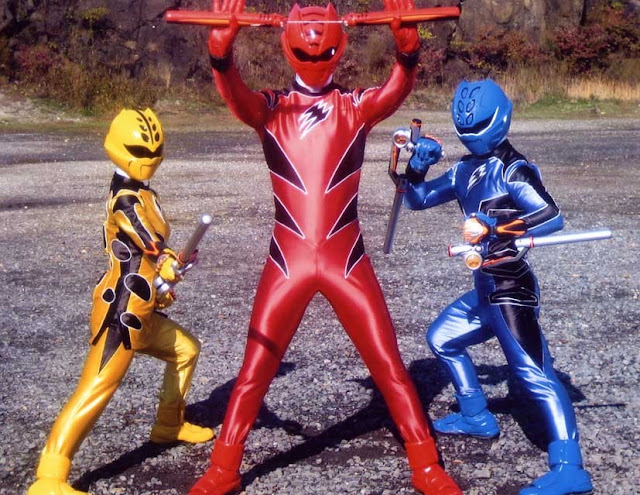 Welcome to the 31st Super Sentai, Juken Sentai Gekiranger (Jūken Sentai Gekirenjā) which roughly translates to Beast-Fist Squadron Fierce Spirit Ranger. Also known as Power Rangers Wild Spirits in South Korea and was what Power Rangers Jungle Fury was adapted from. Following Super Sentai's bazaar tradition of having a 3 Ranger core team after an anniversary season, we have a theme about kung-fu and wild cats with the 3 primary colors. What could this incarnation have in store? Click "read more" and I will share that. 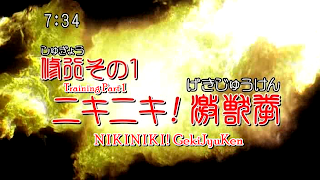 The episode begins with a jungle man wrestling a panda bear. After biting the panda's nose, it taps out.

Those costumes look worse than CG. Also, who wants to see a panda getting hurt?

After this, the panda's leave and our jungle man hears something noisy, or zawazawa as he puts it, and smells something from said zawazawa. So, he rushes off to investigate. This noise turns out to be a plane on the verge of crashing, so naturally, he jumps off a large mountain towards the plane. Cut to intro!

So far, this is amusingly silly.

As a side note, this is one of the most informative intro themes I've seen in awhile. Not only was it a catchy song but it gave a full listing line up of both the main heroes and villains.

One theme song later, we meet the pilot of the plane which has now crashed surrounded by what appears to be this season's foot soldiers/grunts.

This female pilot is no pushover, she uses GekiJyu which makes her get a yellow aura and what appears to be the spirit of a leopard. After that, she defeats these grunt while guarding a suitcase and even tells us who/what they are. Rinshi, "corpses given only a temporary life." That's the most morbid form of grunts I've seen so far. 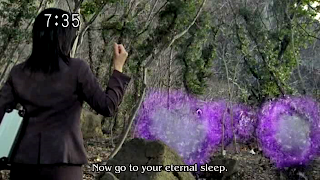 After this battle, the jungle man from earlier appears and is very impressed by the fight. (We already learned from the theme song that this jungle man is the red ranger to be Jan Kandou; I know shocker.) Jan introduces himself and calls himself a "tiger boy" also, tells the pilot that the forest is his home.

There is a rumor that Jan was inspired by our Red Wildforce Ranger Cole Evans. So, you're welcome Japan.

Suddenly, another attack is fired by a not so friendly looking face from atop a mountain. This attack is narrowly avoided by Jan and the pilot.

This ugly monster reveals the pilots name as Miki Masaki and vows to steal her suitcase and eat her. They say that so casually. Makirika takes a Mantis stance and fights Miki. The two throw a few kung-fu moves at each other, but it is revealed that Miki has a wound from her plane crash and Makirika exploits that weakness to knock the suitcase out of her hand. From the suitcase, a bracelet flies out, Kenma's Bracelet, and Jan picks it up.

I just noticed, for a jungle man, his hair seems a little too taken care of.

Makirika knocks Jan back causing him to drop the bracelet. Jan lets out a loud tiger roar in response, but it hit by an energy blast and gets buried under collapsed trees. Now, Makirika escapes with the Bracelet. I have a feeling that piece of jewelry is going to be plot important.

Cutting away, we see a flashback of a kid in the rain surrounded by bodys. (Dead or unconscious is unclear.) This flashback fades into Rio. (We know it is Rio from the theme song.) Rio is at an evil looking alter and is joined by Mele. 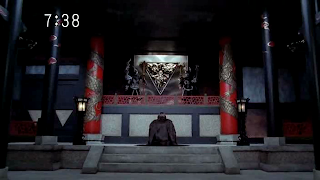 Just to clear things up, theses two are not "rangers" but classified as "other heroes". They have human forms and transformation forms and currently the duo serve as the evil team counterpart to the Gekirangers.

Mele attempts a sneak attack on Rio and it fails. It only takes one line from both characters to figure out what their going to be like.

A moment later, we get a cool long shot of the enemies base as Makirika brings Rio the Bracelet. Rio uses the Bracelet to awaken ancient Kenma-tachi which makes divine sounding voices start speaking that ask Rio what he wants; his only request is power. This ancient Kenma tell Rio to make humans suffer because they can turn human despair into strength. Thus, the monster of the week attacks may begin. 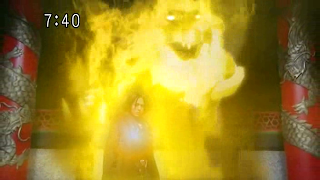 This is our villains plot. Not to take over the Earth or enslave humanity, but a power-craved psycho who basically made a deal with the devil to where the more suffering he causes the stronger he gets. That works, simple but serves the needs for Super Sentai.

Cutting away, Jan has woken up in a bed at the SCRTC building. (SCRTC appears to be a spots equipment industry.) 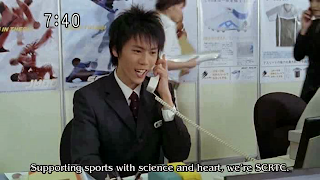 Miki is on the phone with a Master Shafu about what happened in the woods. Also, the two talk about Jan and it is strongly implied they plan on making him a Gekiranger. Jan coincidentally stumbles upon GekiYellow and GekiBlue training. 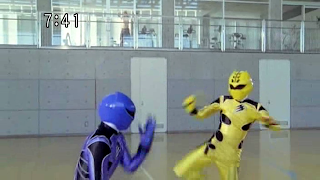 Jan gets overly excited and breaks through the glass falling into where the two were sparing after he sees them summon a yellow cheetah and blue jaguar. He quickly gets up and energetically asks them what that was when Master Shafu comes in and tells him it is called "JyuKen." 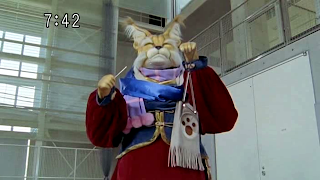 Jan doesn't pick up on the "respect the master" thing and eagerly calls Shafu "cat" repeatedly. Then, the chin tickling. 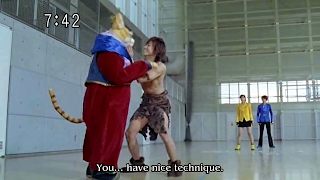 Kung-fu master or not, a cat is a cat I suppose.

Cutting away, JyuKen is explained to Jan. "Kenpou where you fire up your Geki to obtain beast power." 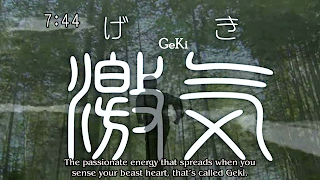 I don't know how made up this is, but it does feel like something they would teach Kung-fu students.

GekiYellow and GekiBlue are introduced as Ran and Retsu who are learning JyuKen with Master Shafu as their Shishou. Also, SCRTC is a supporter of the Gekiranger's battle with Miki as the companies director. How convenient.

Everyone was given proper introductions on this first episode so, we can skip the Ranger Roll Call.

Now at last, the villains are explained. JyuKen is split into two opposing schools. The good guys are JyuKen of justice "Geki JyuKen Beast Arts" and the villains or JyuKen of evil are "Rin JyuKen Aku Gata."

I like the idea of both sides using the same powers in different forms. I've had ideas like that myself.

On that note, a quick cut-away shows Rio announce that the Rin JyuKen Aku Gata will now rule the world to gain ultimate power. Guess I was wrong, they did decide to throw world domination in there.

Both Jan and Master Shafu scene the RinJyuden are on the move, so it is the call to arms. Ran and Retsu both jump up ready to fight and to everyone's shock, Master Shafu gives Jan a Gekichanger.

This is one of those rare cases where the Super Sentai and Power Rangers had two different changer/morpher devices. In Power Rangers, it was changed to sunglasses which I was not a fan of.

While Ran and Retsu are against Jan joining them, Master Shafu has faith because he says a heart of justice is the first step to mastering JyuKen. So, he gives Jan some clothes and the 3 rangers race off to battle.

Cutting away, we see more Rinshi lead by Makirika beating up random civilians. After some cries of agony, Makirika changes form into a mantis monster. 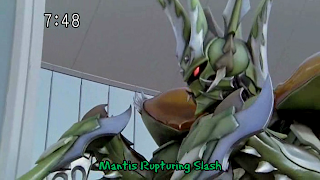 That transformation was disturbing.

On the topic of transformations, the Rangers finally show up and it is time for their first henshin.

Ran and Retsu charge forward against the Rinshi and show off some of their special moves in the battle. Jan gets excited and tries to henshin and join them, but his changer isn't working.

However, before any questions can be asked about that, Jan notices a building collapse and races over to help the people. Once they, he finds a little girl in the middle of the falling debris crying for her parents and too scared to move. Jan tears up a little bit himself and rushes to save her after almost getting hit by a falling car. That's cliche but still touching.

Makirika shows up now to terrorize the little girl in order to gain even more strength. Wow, this is the first time I've seen villains have a legit reason to target children bystanders. 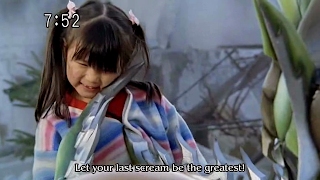 Watching this happen to the little girl was enough to push Jan into getting his changers working. He lets out another roar and finally GekiRed is born. Jan unleashes a series of kung-fu style attacks that push Makirika back hard. Eventually, Jan uses JyuKen and summons a red tiger that bites Makirika and throws him through a building. Rio scenes the tiger and is in disbelief that it has awakened. He must have a history with the tiger spirit.

Makirika is feeling insulted and frustrated, so he uses a Rin JyuKen technique that turns himself giant. So, it is a season where the monsters of the week turn themself giant before being destroyed. 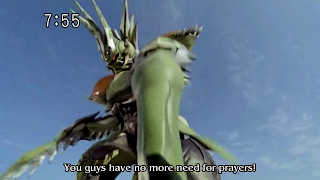 I kind of miss this old up angle shots that give the illusion of giant.

Giant Makirika smacks the Gekirangers around a little before a giant Master Shafu comes to help. 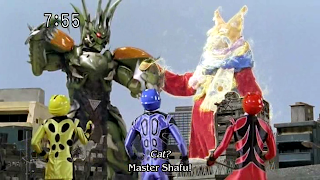 That's a new one.

And this where the episode ends, on a cliffhanger. 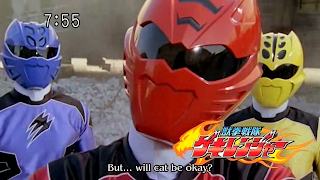 This episode was great. From beginning to end it was non-stop energy with plenty of action. Also, every major character got introduced in a simple yet effective way and they all seem interesting. Granted, Ran and Retsu only got basic introductions, but it was enough to build the characters from. Honestly, I'm really impressed. None of this episode felt like it was filler or did not need to be there and it stayed interesting the entire time. If it absolutely had to nitpick something, it would be the effects. The costumes and special effects look really fake and heavily dated, especially when they use green screen explosions. However, they were fine for the time and I wouldn't expect a high effects budget for a show like this in 2007. I didn't expect to give this beginning such high praise, but I legit cannot think of anything terribly wrong with this episode. 5/5
Posted by Cendoo at 11:30 PM