Behold, the great 40th anniversary season of Super Sentai. Doubutsu Sentai Zyuohger or Animal Squadron Beast King Ranger and the second Wild Animal themed season. These anniversary seasons have a lot of hype to live up to so, let's go ahead and click "read more" to see what they have done.

The episode begins with a narrator giving a lesson on species on Earth. I guess a wild animal theme needs a nature lesson. 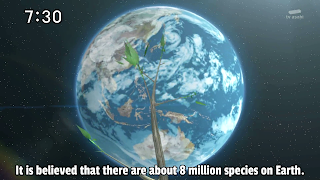 More importantly, we meet our soon to be Red Ranger, Yamato Kazakiri who is taking a group of people on what appears to be a wild life tour guide. It would appear that this seasons Red Ranger is a zoologist. 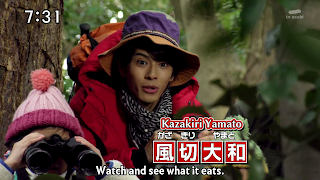 Yup, he has that red ranger look.

Yamato gets an embarrassing encounter when a guy he refers to as Old Man Mario appears in a horse costume. 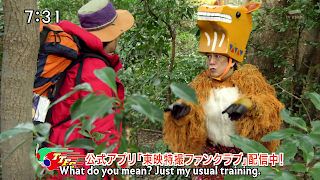 The guide continues on. Yamato brings a fallen egg back to a birds nest when his "previous charm" falls out of his backpack. This charm appears to be a white cube that rolls down a hill and Yamato chases after it. After getting back the charm, it starts to glow and a giant one appears before him. 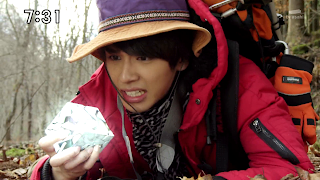 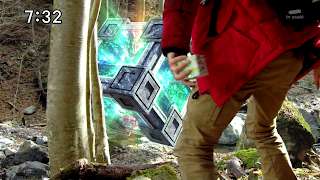 Yamato places his cube inside a slot of the giant cube because it looked like it fit and then the giant cube eats and teleports him him. Wasn't that cube supposed to be precious to him? Gave it up pretty quick.

After this trip, Yamato finds himself in area inhabited by humanoid animals.

Those are some uncreative names. Wait, those animals are the other rangers?

Yamato looks around in confusion and amazement at the world he has landed in. The narrator repeats his line from earlier, "there are still many life forms on Earth that are unknown to us", and cut to intro.

That's definitely a different way to start off a season. The text on screen is kind of a lazy way to introduce characters but I can tell this episode just wanted to get that out of the way.

One theme song later, we now get our fist look at the villains of this season. DeathGaliens

When I first saw this Nario girl, I thought it was Insarn from the 35th anniversary season Gokaiger. On that note, Ginis looks similar to Warz Gill also from Gokaiger. Interesting

Earth will be there 100th parget and Jagd is ordered to go destroy Earth. Looks like they can make Frieza proud.

Meanwhile, Yamato is given a tour of the new world he landed in which is called Zyuland where Zyumans live. Please stop. 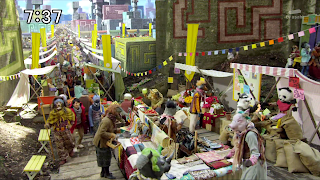 That large cube that brought Yamato there is introduced as the "Link Cube" and is the only connection between Zyuland and Earth and the 4 Zyumans that will be rangers are the guardians of the Link Cube. Turns out, Yamato's charm is one of 6 cubes that are "the mark of the king" and Yamato's was stolen. A quick flashback reveals that it was a Zyuman that gave Yamato that cube when he was a kid. 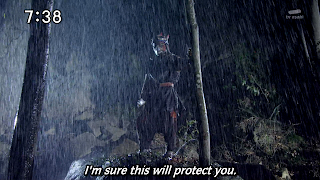 Tusk comes in riding on a regular Elephant and has Yamato's cube, asking if he stole it. Why do the Zyumans have regular animals like ours? 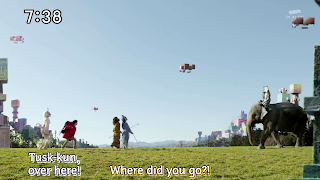 However, Jagd appears on Earth from a ship and summons this seasons grunts. This time around, the grunts are summoned with a coin that turns into multiple coins that then turn into the grunts which are named Moeba. Moe? Really? 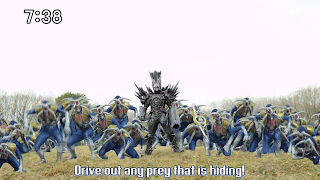 The Link Cube starts acting up as if it is going to break which freaks out Yamato thinking he may end up stuck there. So, he fights his way out of Leo's grip, takes back his cube, and rushes over to teleport back to Earth. Still thinking he stole the cube, the 4 guardians chase after Yamato and end up getting teleported to Earth with him.

Once back on Earth, the 5 of them appear in a burning forest where the Moeba are attacking the people Yamato was guiding. Yamato rushing in to save a kid named Keita from being blasted by Jagd. Jagd announces that the Earth is DeathGaliens' new playground for their "Blood Game". So the villains don't conquer planets, they destroy them for fun. Interesting. After this, Jagd continues blasting everything in sight and one of his shots hits the Link Cube. 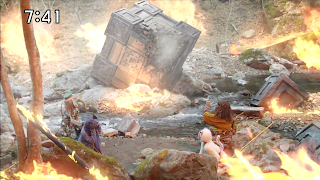 Enraged, the four guardians pick up their cubes and cow to stop Jagd. At that moment, their cubes glow and they feel power flowing. Is it time? Before long, the cubes take new forms as changers. 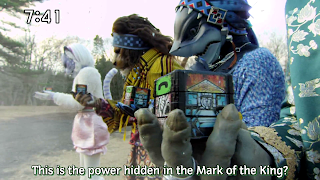 Aren't those suits a little tight?

The four of them do a roll-call and the first ranger battle begins. This fight involves a lot of roaring and shows off a different form for the rangers where they grow animal parts. Unleash the Beast! 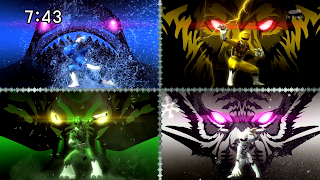 After the Moeba are defeated, it is time to reveal the base weapons, Jyuobuster. Basically, they are blocks that become a sword gun. 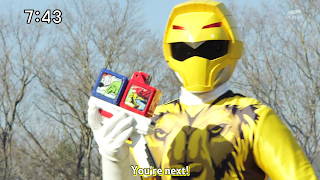 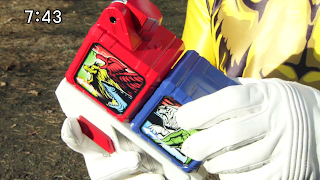 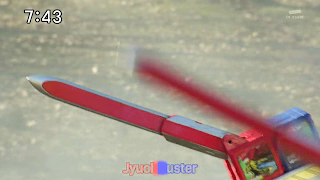 Blue first then red makes a blaster, red first makes a sword. That does not look comfortable to handle. Yamato has been watching in awe on the sidelines when he spots his block on the ground. He picks it up and runs off when the same Zyuman from his childhood appears holding the 6th block. Talk about revealing a potential 6th ranger early.

Back at the fight, the tide turns against the Zyuohgers. The Moeba now have jetpacks and are blasting up the battleground from the sky which distracts the rangers enough to let Jagd get in some hits. At this point Yamato jumps in and tries to fight Jagd without any ranger powers. Naturally, he gets beaten bad, but is determined to fight and protect the forest/people so, he pleads with his cube. All this talking to blocks is getting kind of worrying. 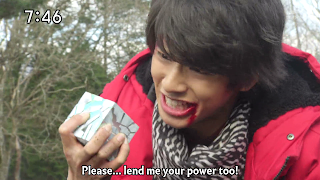 Tusk tells Yamato that only Zyuman can use the blocks, but Yamato is not convinced. He asks how are they different and boldly yells "humans are animals too". Can you imagine if they tried to say something like that on an American children's show? Apparently, these blocks are alive because this plea works and Yamato henshins into ZyuEagle. 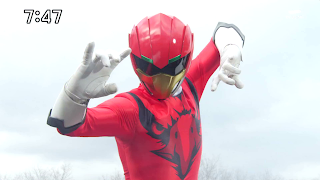 There costumes reminded me slightly of the Zyurangers' with the gloves and boots. Now their ranger forms have Zyu in the name? Theory for another day.

Yamato's "Unleash the Beast" form lets him grow Eagle wings and fly so he is able to take out the flying Moeba. 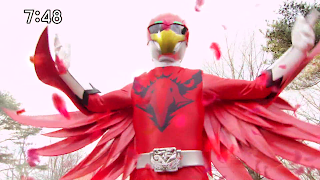 Reminds me of Jetman.

This new flying fight involves a heavy use of CG but is fast paced enough to still be enjoyable. Jagd starts blasting and missing and Yamato stops flying and summons a sword, Eagriser. That's a lovely name. 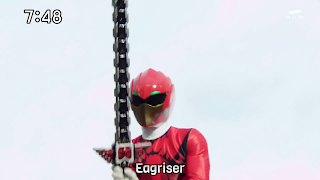 Yamato easily overpowers Jagd and finishes him off with a "Riser Spinning Slash" where he wraps his chain blade around Jagd and pulls it off. Man that looks painful. This defeat makes Ginis stand up to the shock of all the other villains. He tells Naria to make Jagd grow or "give him a Continue." Really sticking with that game thing. 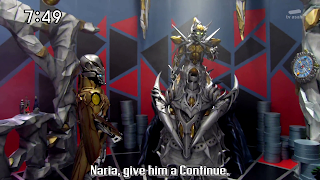 Aww, that does not look right.

They use a gold coin to revive/grow monsters like tokens in an arcade. 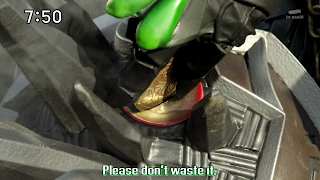 The monsters treating the invasion like a game sounded cool at first, but they are taking it way to literal.

Naturally, this is where the mecha get introduced. One of the buttons on their block/phone things glows and pushing it lets them turn to a new pattern. 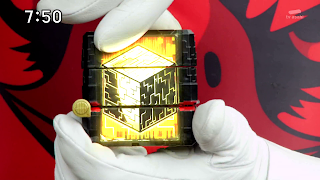 Rubix cubes vs the arcade. How are those things relatable to a wild animal theme?

The mechas and their cockpits are all block themed. They have cube like cockpits with cube controls and the mecha themselves start as cubes and unfold into animals.

More Moeba appear in flying triangle ships as well. This giant battle is my favorite kind, one with individual mecha fighting. At least at first. Tusk puts out the forest fire and the others blast/chomp down the Moaba ships. Finally, it is combining time. Three flaming squares appear in the sky that allows 3 of the mecha to combine, anymore get rejected.

Well, only Eagle, Shark, and Lion get to fuse this time around and the end result is blocky, Zyuoking.

This feels like minecraft. 2016, a bit after the games peak.

This giant battle doesn't last long. Zyuoking completely overpowers Jagd and even Elephant and Tiger sneak a hit in before Jagd is defeated by the King Sword Slash.

The episode ends with the 4 Zyuman rangers realizing they cannot return home because they're missing the 6th Mark of the Kings (those cubes). Yamato promises to take care of all 4 of them and help search for the missing Mark of the Kings, but they are concerned about hiding their animal faces. Just then, their Mark of the Kings glow and everyone is given a human form. 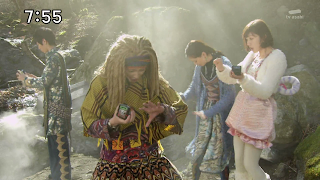 That will save production time. They still have tails.

Everyone properly introduces themself as a way of doing a fresh start. However, Tusk says he cannot let Yamato take care of him implying he still does not trust him. End of episode.

This episode was weird but pretty good. The design choices are confusing with all the blocks and the enemies being an arcade game theme is cool, but out of place. It would have been fine if this was another VR theme or high technology, but for a Wild Animal theme having blocks and arcade games is an odd choice. I suppose it is possible they were going for a technology vs nature bit, but it did not feel like that and if that is the case I don't think arcade machines are the best representation for technology. Or, maybe I am just overthinking it. Despite this odd designs, the world is still interesting with likable characters. Personally, I always like Rangers that try to fight before they have powers and making 4 of them Zyuhumans would have been a bold move, if they didn't play it safe with human forms. But, I can't fault for that choice.

Although it definitely did not feel like an anniversary season, not yet at least. I know for a fact that the anniversary specials will come later. Comparing to the last couple anniversary seasons, it doesn't live up to Gokaiger but was on par with Boukenger as far as quality goes. Overall, I'll give this episode a pass, not bad, not amazing, but good enough to invest in episode 2. 3/5
Posted by Cendoo at 12:00 AM