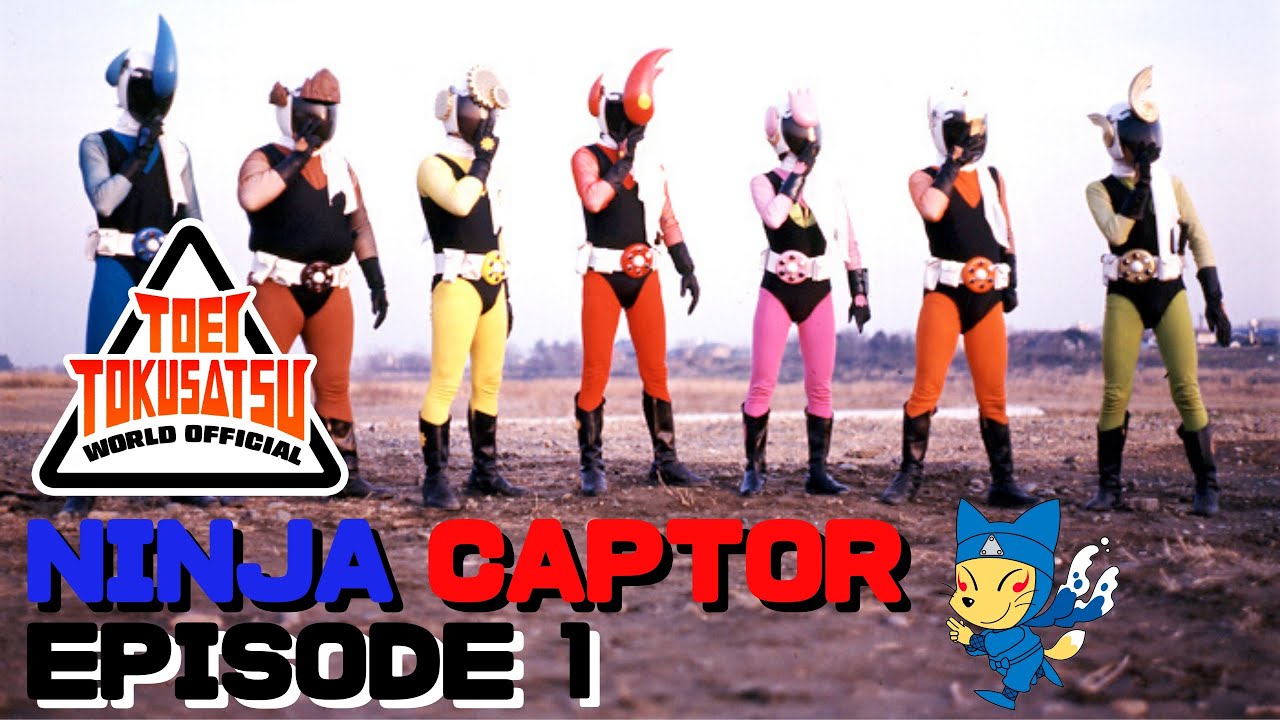 I know what you're thinking, what on Earth is Ninja Captor? Is this a Super Sentai? Technically no. At least not anymore. Time for a brief history lesson. Once upon a time there were two franchises, "Sentai" and "Super Sentai". The original 2 Super Sentai, Gorenger and J.A.K.Q. were not originally considered part of the Super Sentai series but just the Sentai series along with Ninja Captor and Battle Feaver J was at one point credited as the first Super Sentai. However, nearly 20 years later in 1995, this was retconned to include Gorenger and J.A.K.Q. as Super Sentai with the airing of Chouriki Sentai Ohranger. Ninja Captor however, did not make the cut and was reclassified as a "Ninja Hero" series instead. To this day, Ninja Captor is mostly ignored outside an occasional loose reference.

Why was this season not included? I couldn't say. But, I have always been curious about it and now thanks to Toei's official YouTube page, I have a chance to watch it. Click "read more" and I will share my thoughts. 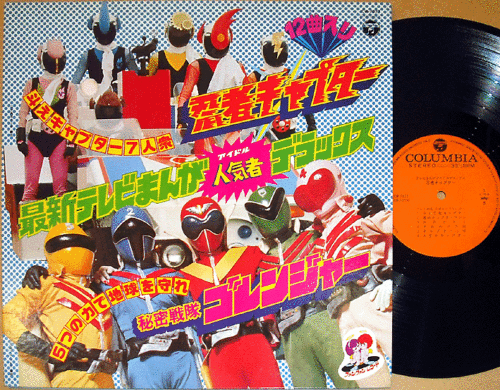 An image of an old vinyl record and a picture from a Dynaman guidebook as proof this was once considered a Sentai. If you want to research more into that, I'd suggest starting on the fandom page.

The episode begins at the "Ministry of National Defense" where the director's daughter, Ritsuko, gets kidnapped by a monster who introduces himself as a Wind Demon. This demon demands all of the ministry's weapons and ammunition in exchange for Ritsuko. The Wind Demon gives the Director until night make a decision.

That's a pretty big demand. Pretty sure they would fire the Director before letting him agree to that.

Cutting around, we find ourselves watching one ninja following another and the two collide in some woods. A quick clash and one ninja disappears inside a tree stump that the other ninja deduces must be a secret tunnel that leads to a place called "Edo Castle".

The second ninja that disappeared into the stump, Daisuke Izumo, then runs through a series of tunnels and ends up at an underground meeting place for a ninja clan where the Wind Demon from before is also present. 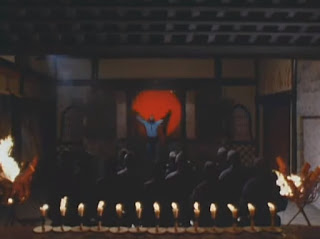 This evil looking group of ninjas discuss their plan to destroy Tokyo using the Ministry's weapons and take over all of Japan. If they only want Japan then we know no other nation will get involved. And,this whole plan depends on using the directors daughter as ransom. That sounds fool proof...

Daisuke demands returning the girl because ninjas should not act immorally. The general of the group ignores Daisuke and starts beating Ritsuko who starts begging her Dad to save her. 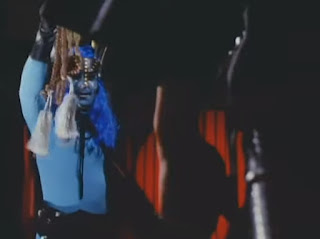 This kid cannot act and the blows never once look like they actually make contact, but still pretty dark writing.

Daisuke defies the general and attempts to rescue Ritsuko. While fleeing, some of the ninja from the meeting give chase but are killed by various traps. Also, when they get back outside, the ninja who was chasing/fighting Daisuke ends up helping him escape. It is a little hard to follow at this point due to a lot of jump cuts and the low video resolution.

Finally in the clear, Daisuke removes his ninja gear and wonders who the other ninja that saved him was. 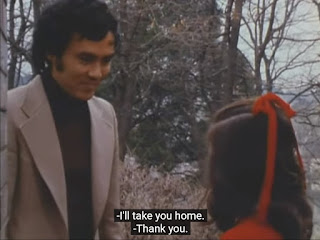 Good thing he just happen to have that suit under his ninja outfit.

However, Blood Bat returns with a bunch of ninja grunts and now the chase is on. After some running around through the city, Daisuke ends up challenging Blood Bat on a buildings roof. Sadly, he is quickly beaten by Blood Bats power and is knocked off the roof. 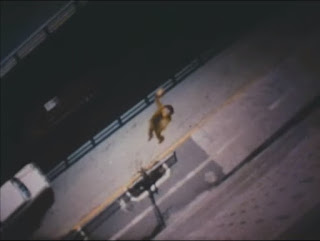 For a couple seconds, we see this weird cut out looking form falling. Even for the 70s, that looks pretty fake.

At this point, another Ninja appears out of one of the buildings windows and rescues Daisuke with a rope. I should show him, considering he will most likely be one of the 7 Ninja Captors. 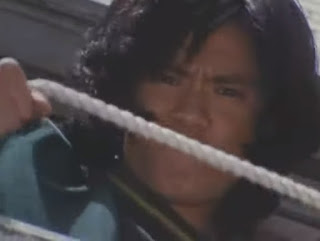 This new rope wielding ninja takes the somehow unconscious Daisuke to an estate belonging to a"Mujin Tendo" and tends his wounds. When did he get wounded? After Daisuke regains conscious, the ninja that saved him introduces himself as Sakon Shijo. Also, Master Tendo appears as well along with the ninja from the woods.

Saburobe. That mustache though. Then, two more of Master Tendo's students walk in and introduce themselves out of nowhere that Master Tendo says will be Daisuke's comrades.

Well that is one of the weakest ways I've seen a ranger/hero get introduced.

Master Tendo then tells Daisuke that his final 2 students, Dan and Noboru are pursuing Ritsuko because Wind Demon took her back. Daisuke, being a former member of Wind Demon, takes responsibility and rushes off to find Ritsuko.

After a little bit of searching and some ninja chanting, Daisuke runs into Dan and Noboru with a message from Tendo. A message that Daisuke will become Captor 7, a Ninja Captor. We're finally getting to that.


Cutting to a harbor, the Ministry Director is meeting with the Wind Demon general, Reppu, along with Blood Bat and some grunts to plead for his daughter, but he cannot bring the weapons. Of course he couldn't do that. Upon hearing this, the Wind Demon begin whipping the tied up Ritsuko. 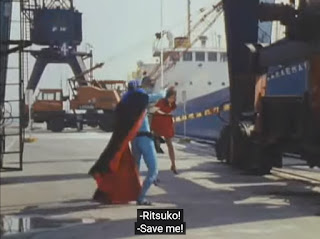 This had to have been awkward to film.

Luckily, Daisuke shows up to save the day. He disowns Reppu as a general and vows to fight Wind Demon even if he has to do it alone. No offense to the other 6 who want to help him. Now its time for a fight.

This fight scene is laughably bad. The enemy grunts walk up and clash swords with Daisuke one at a time and all just wait patiently while he pauses to look around. 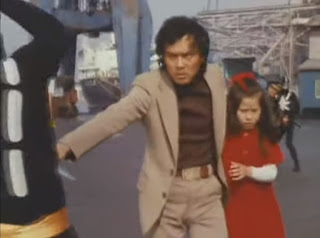 After taking a few cuts and getting both Ritsuko and the director behind him, Daisuke ends up cornered. However, Master Tendo shows up and gives Daisuke the Captor 7 helmet along with reinforcments. 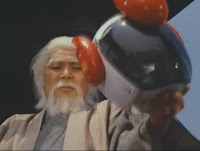 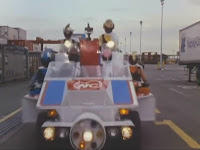 Daisuke joins the group and they all have a roll-call followed by another fight scene. 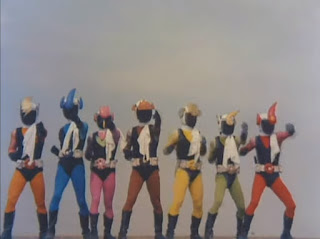 This fight is more proper for a 70s Tokusatsu hero show with the rangers Captors easily defeating the grunts with some silly looking weapons, basic martial arts, and a lot of jumping around. Blood bat gets a few hits in but is ultimately defeated by Daisuke when he summons a ring of fire around him that somehow makes him explode. 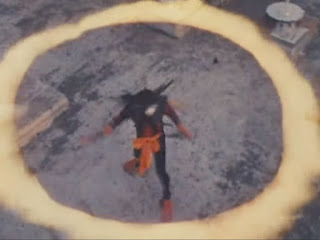 I totally believe that fire is really there.

The episode ends with Ritsuko and the director thanking the Captors and the narrator saying the ninjas are the hope against evil.

This episode was, not quite a Sentai but a good cheesy 70s ninja show. There were a lot of issues, effects and fight scenes were bad, even for the times and half the Captors barely got 1 line in. However, as a whole, it wasn't that bad. I can make a few guesses as to why this show didn't make the "Super Sentai" cut and was rectoned out of the "Sentai" name entirely. It could be because it aired when Gorenger was still airing and J.A.K.Q. was the true successor so it would have been confusing. Or, more likely, it was because this show felt very different than the Super Sentai. Could also just be a ratings thing, who knows for sure.

All in all, this show seems just okay. I can't say this first episode got me super invested, but it wasn't really that bad and is on par with the "real" Super Sentai of the time period. My curiosity is satisfied for now. 3/5
Posted by Cendoo at 2:32 AM