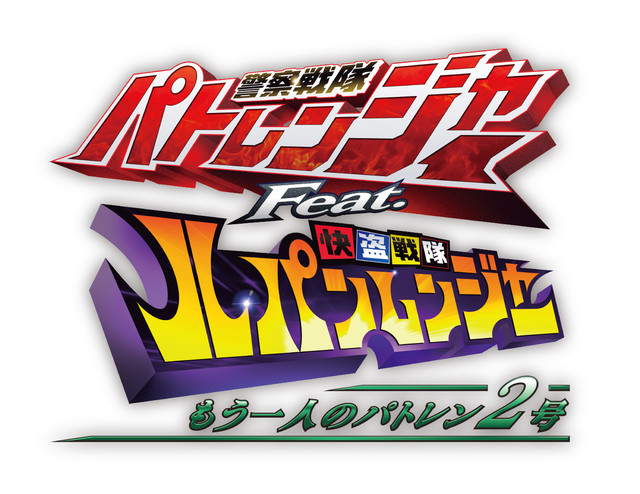 Dang the title is a mouthful! Well, this is an interesting two part spin-off series of Lupinranger vs Patranger. Taking place roughly in-between episodes 26 & 27, this special was only shown in the Toei Tokusatsu Fan Club and features a the original Patren 2gou or green Patranger before Sakuya. I'm entirely sure what too expect but both parts are only around 13 minutes long so, click read more and let's go over both of them.

The first part begins on an odd note. Noël Takao is wonder why Sakuya is PatRan Nigou (2) while Tsukasa is Sangou (3) when Tsukasa is the Sempai and outranks Sakuya. It's because the sexist old fashioned writers would hate to put a female ranger's rank above a males but they'll never admit that. Sakuya says it's a long story just as the alarm goes off about another Gangler attack.

I have to admit, that is a nitpick topic but a legit question which is perfect for a spin-off like this.

The 4 Patrangers henshin up and go on the attack. Something from the past has Keiichiro really fired up as he begins to fight recklessly and sloppy, even causing Noël Takao's device to unlock the safe to get damaged. Smooth Red. Zonic ultimately wins this struggle by using a Sonic Wave attack and leaves the Patrangers in their own frustration.

Back at the Global Police HQ, Tsukasa begins to explain to Noël Takao about their history with Zonic Lee while Keiichiro is out in the park trying to calm down. The Lupinrangers make a cameo in the park scene. I got a feeling they aren't going to get much screen time so it was worth mentioning. Tsukasa tells of how their first encounter with Zonic was when their unit was first formed with Keiichiro, Tsukasa and Sakuya's predecessor Shinonome Satoru.

Satoru was the laid back and irritating type who was also a skilled fighter with an unmatched scene of justice. That does fit the description of past Super Sentai rangers. He fought against the Ganglers with Keiichiro and Tsukasa before they had PatRanger equipment as Nigou. 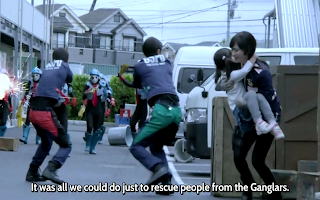 Always interesting how these foot-soldiers are immune to traditional weapons with bullets but can go down from an unmorphed kick.

During the flashback, it is also shown that Satoru is the one who suggested that Keiichiro listen to music to try and relax because of his anger issues. That moment would have been a lot deeper if listening to music was actually something Keiichiro did in the series regularly instead of only in this special. It was also shown that Keiichiro would often yell at Satoru because of his carefree nature while Keiichiro was constantly stressed over how they can defeat Ganglers. All the while, Tsukasa desperately tried to make peace between the two. I think I know where this story is going.

While Keiichiro, Satoru, and Tsukasa  were on a mission investigating a possible Gangler hideout in an underground tunnel, the three of them encountered Zonic Lee and fought against him desperately. However, with only pistols, the three of them could not even hurt Zonic and Keiichiro almost got choked to death after everyone was hit by the sonic wave attack. Satoru managed to shield himself from the sonic wave by having his earbuds in and saves Keiichiro. I don't think that would be enough. Unfortunately, this is when things go wrong. Zonic Lee uses his sound wave attack on the ceiling and causes it to break apart. Before Keiichiro and Tsukasa are crushed by the falling rubble, Satoru pushes them out of the way but gets buried himself which critically wounded him. 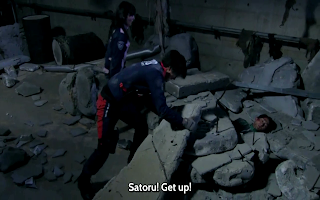 This is easily one of the stronger store arcs compared to the main series. The acting was great and the build up was more than enough to invest in part 2. However, there is one problem, if Sakuya replaced Satoru, that still wouldn't explain why he is Nigou (2). If the second in command dies the 3rd rank would move up and leave the number 3 spot open. Why wouldn't they give the rank to Tsukasa? Are the ranks strictly bound to the colors and they didn't want a boy pink? Maybe part 2 will explain.

Part two begins still in the flashback. Keiichiro and Tsukasa are outside Satoru's hospital room where he is still alive but in bad condition. Keiichiro blames himself for what happened and Tsukasa tells him something Satoru said in part one off screen. To summarize, Keiichiro's seriousness is both his forte' and weakness as it could cause him to lose himself without realizing it and that it is his job as Nigou to support him. Probably predicting him getting angry and reckless.

Back in present time, it is revealed that Satoru survived and was transferred to France HQ. Seriously? All that dramatic build up like it was a revenge story and he lived? That's a cop-out, no pun intended. Sakuya shares Satoru's views and believes it is his duty to support Keiichiro. Well, duh.

Honestly, that really does bother me. Part 1 ended like it was a noble sacrifice but nope. On one hand, that was surprising so I'm not saying he had to die for the story to work, but all that build up and they just brush off his survival by having it said in past tense? They could have at least shown Satoru pull through and have an emotional goodbye as he leaves for France. On that note, Noël Takao is from the France HQ so, shouldn't he have already known this story? Also, Satoru being the original Nigou doesn't explain why Sakuya got to skip a rank!

Moving on, back at the park, Keiichiro notices that he can't hear the kids playing with the earbuds in and comes up with a plan to deal with Zonic Lee. He couldn't have just come up with the same plan that Satoru used to save him could he? Just in time, the alarm sounds and Zonic Lee is on the attack again. Sakuya and Tsukasa arrive with headphones on to fight him. Okay, maybe there is more to Keiichiro's plan. 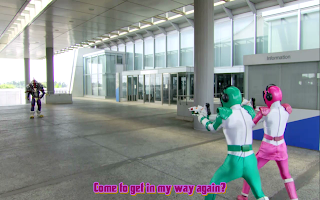 How are those working through the helmets?

The headphones work at first, but Zonic just increases the strength of his sonic wave and knocks off the headphones from the two rangers. Gotta say, that looked painful. It is at this point that Zonic reveals his collection piece's power; it lets him increase the volume of his sonic wave as much as he wants. That's a very situational ability. What would happen if a Gangler who didn't have sound based powers used it?

Tsukasa and Sakuya are knocked out of henshin but still try to fight back. Sadly, it is no use and the two of them get beaten bad by Zonic. Keiichiro arrives just in time to save Sakuya from getting choked to death. The irony is not lost on me. Now it is time for Keiichiro to reveal his plan, he counters Zonic's sonic wave by using his music player to play anti-phase waves on his megaphone to create another sonic wave that cancels out Zonic's. 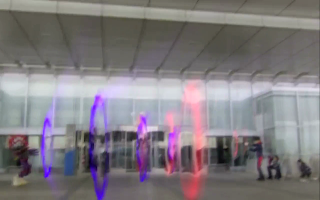 Is anyone reading this a scientist? I have so many questions about the logistics of that plan.

With no more sonic waves, it is time for another ranger battle. Keiichiro and Sakuya swap weapons Gokaiger style and the rangers are actually winning. Noël Takao jumps in to steal the Lupin Collection Piece before any fatal damage can occur. Although he doesn't stay to help in the fight.

The PatRangers finish off Zonic with a triple attack and he explodes in colorful waves. 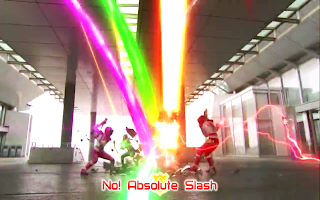 There is no giant battle. Keiichiro praises Sakuya for a job well done and goes home. The special ends and the Lupinranger's bistro where Sakuya brought Noël Takao to celebrate. Noël Takao gives the new collection piece to Kairi gift wrapped and Sakuya brags to Umika about what Keiichiro said to him. Even Satoru makes a cameo appearance at the Bistro but with no one there that would recognize him.

The special ends with a quote, 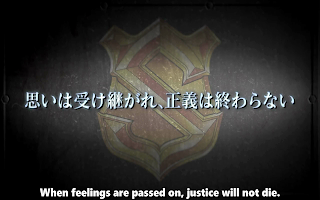 This spin-off special was worth watching. Part one was great, part two almost ruined it but saved itself. It was honestly a breath of fresh air to see the Patrangers get a good story arc after watching the main series slowly give all its attention and love to the Lupinrangers. Satoru was an interesting character, even though his send off was underwhelming, it is obvious that this is not the last time this season will use him. Overall, these two parts where both half the length of a regular episode, but were better than a lot of the regular episodes. Probably not mandatory to watch this in order to follow the plot of Lupinranger vs Patrangers, but for what it is worth, I had fun with it. 4/5
Posted by Cendoo at 3:58 AM