We have reached the halfway point of this special Korean made Power Rangers and it seems the Gold Ranger's identity arc will be concluded this time. Last episode was not great, but did not ruin the overall stories flow. Click "read more" and let us see if they do better this time.

Following the typical recap/theme song, the episode begins immediately where the last one left off with Juyong recognizing Juhyeok as his older brother. However, Juhyeok denies having any little brother and leaves while swearing he will win their next fight.
Everyone is taking that battle between Gold and the 5 Rangers their own way. The villains are losing patients and decide to see if Juhyeok has the Dino King Power inside him. Meanwhile, at the Spirit Base, Juyong is not 100% certain that the Gold Ranger is his older brother because his memories are fuzzy and he denied it. The other Rangers are in scrambles about how to feel about the situation and eventually, everyone except Jeon wants to bet on whether or not Juhyeok really is his brother. Juyong leaves on his own to find out for sure if the Gold Ranger really is his brother. 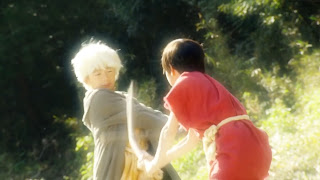 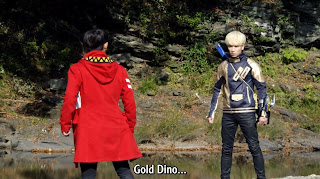 Sometimes I wonder if fashion sense is a factor when rangers are chosen.
Juyong and Juhyeok meet at their old sparing ground which is enough to convince Juyong that the Gold Ranger really is his brother. Juhyeok refuses to answer any questions and insists on finishing their fight instead, so the Ranger duel begins. Good thing the same lake they used to train by is in walking distance of the Spirit Base.
The brothers attack each other and are fairly evenly matched. However, Juhyeok is showing hesitation. 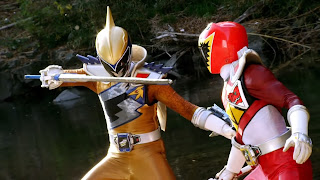 Never use foam props in a fight scene that involves water.
Juyong again tries to call out Juhyeok as his brother, but he keeps denying it. Juhyeok goes down after his Lightning Afterglow is hit back at him by Juyong. Emotions pile up in the Red Ranger who wants nothing more than to figure out why his brother is in turmoil. 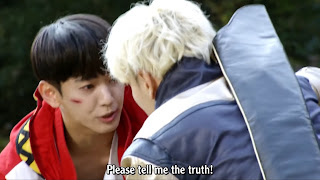 However, before Juyong can get any answers from his brother, the two of them are attacked by Raimein and Homuras. 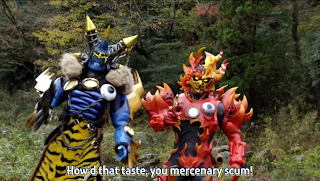 Juhyeok shields his brother while claiming it is only a temporary alliance in order to not lose his target. Doing so, he reveals a power that gets a reaction from Neo Deboss and Torin, possibly the Dino Kings Power. Also, the other 4 rangers abruptly show up at this point as well. They all make piece with the situation, Jeon gives Juyong the your problems are our problems speech and Yun says they will work together despite still not liking Juhyeok. So, the first 6 Ranger team battle is about to begin. 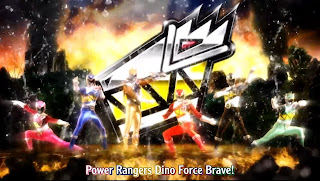 While the original series had 10 Rangers, this is as many as we will get in this Korean made sequel. The only "Power Rangers" to be part of the Super Sentai universe.
The Ranger fight is pretty standard; all 6 of them get a moment in the spot light as they make quick work of the grunts and get a few hits on the enemy generals with some kid friendly trash talk. Raimein and Homuras don't put up much of a fight before summoning a Sasinma giant robot to take over. Thus, the giant battle begins. 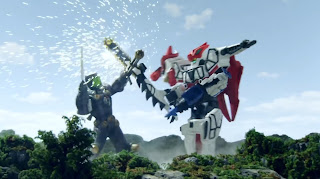 Honestly, the extra white on the Megazord design is really growing off of me. I liked the idea of it, but the quality looks so plasticky.
This generic giant robot seemingly has the upper hand in the fight with the TyrannoKing which prompts Juhyeok to join in claiming it payback for violating their contract. His mecha combines with the TyrannoKing to form Brave Raiden Tyranno King. 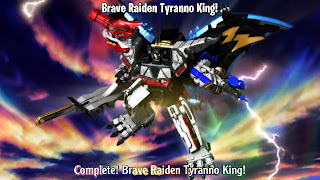 Just the flying Zord attaching to the back of the current Megazord. Nothing new, but it works.
This new flying combination defeats the Sasinma in one strike earning the Rangers another victory.
After the fight, Juyong  tries to get Juhyeok to join them but the latter refuses. However, Juhyeok leaves his business card and says he will consider fighting with them if they hire him as a mercenary. Juyong is visibly conflicted but the rest of the team do not like Juhyeok. The End! 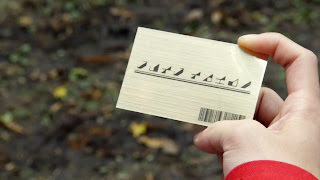 That's as simple a business card as you can get. I have no idea if that writing is Korean or just some symbols.

This episode was good, not great but enjoyable. Just like the majority of this series so far, the writing is a little stock, but done with passion. Everything that needed to happen in order to finish up the evil ranger/sibling story arc was done; a one on one duel, teaming up after the villains betray the evil ranger, a new toy is showed off, and the soon to be enemy turned ally walks away dramatically. Everything done has been done before in Super Sentai. However, this season has never been one for ground breaking writing, but rather just a fun time. In that regard, this episode was all dramatic speeches and fighting which, while chiché, is still fun to watch. Overall, I give this episode a passing grade. It is exactly what any long term fan would expect from an evil ranger arc and it delivers that with pride. 3/5
Posted by Cendoo at 11:30 PM