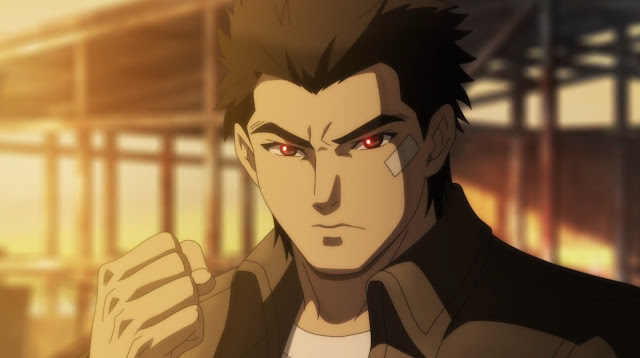 This is it, the final episode of what I hope is only the first season of what has been a fantastic adaptation of my favorite video games series. Ryo and company have reached the roof of the Yellow Head Building and the final brawl from Shenmue 2 is about to begin. Click "read more" for my full coverage.

The episode begins with Ryo seeing Lan Di, his fathers killer, hanging from a helicopter and the hatred in Ryo's eyes grow. At the same time, Yuanda Zhu is being guarded by 2 men in black suits while Dou Niu is hanging Wong over the edge of the 40 story building. 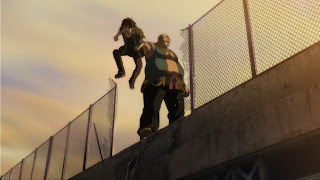 "We'll see if this kid can fly."
Lan Di is landed on top of the roof with the others and Ryo's rage buildings rapidly to the point where he charges him. The two of them begin to fight. 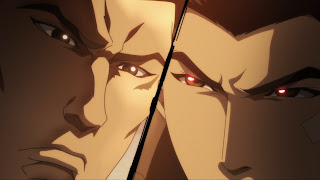 This didn't happen in the games; Lan Di never came down from the helicopter. The fight and dialogue is actually similar to the confrontation between these two in Shenmue 3.
Lan Di comments that Ryo has "improved somewhat", but their fight is still completely one sided. Despite Ryo's desperate fighting and burning resolve, he is simply no match for the mob boss and one heavy blow to the chest knocks the red out of Ryo's eyes.
Yuanda Zhu speaks up. He agrees to tell Lan Di what he wants to know in exchange for putting Wong down, Lan Di agrees. 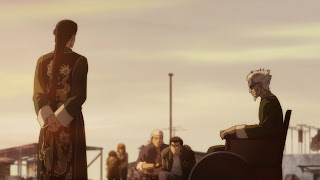 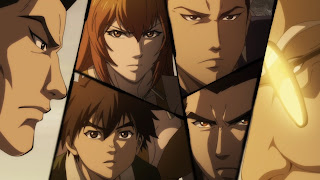 This is another event that didn't happen in the game. We never saw these two speak directly to each other before.
Yuanda Zhu simply says, "it's in Bialu Village" and Lan Di returns to his helicopter and watches what unfolds. Dou Niu is confused but his men inform him that this is his opportunity to show Lan Di that he can be useful by "cleaning up this mess". This prompts Dou Niu to charge at Ryo.
Ren grabs Zhu and says they will make a break for it, but Ryo is too focused on Lan Di to pay attention as Dou Niu closes in on him. Just before getting punched, Ren reaches Ryo and both of them go flying back against the gate of the roof. Ryo is still trying to call out Lan Di but Ren grabs his collar and finally snaps him out of it with words that reflect lessons he has learned so far. Now it begins, Ren takes on the men in black suits while Ryo faces off against Dou Niu. 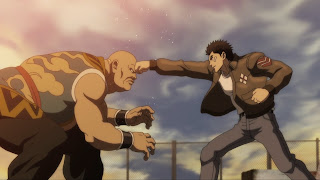 Dou Niu's superiors strength is obvious and at first it is too much for Ryo. But, Ryo remembers the various lessons that martial artists have taught him since the beginning of his journey and gets a hit in. Afterwards, Ryo closes his eyes and uses the Minds Eye technic that the "blind" man taught him. 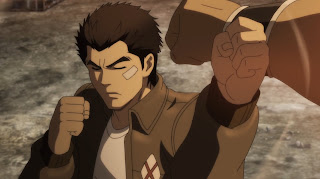 Predictive explosion. Like a polished mirror.
Ryo leaps up and lands a Swallow Dive on Dou Niu's head just as Ren knocks out the suits. Finally, he defeats Dou Niu with the Counter Elbow the Xiuying taught him. 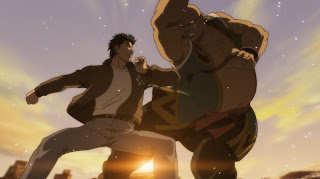 Overcoming previously unwinnable situations is how they show Ryo's growth in strength and character.
Back at Ren's hideout, Yuanda Zhu learns of Ryo's Father Iwao's death and reveals that Lan Di's reason was for his own revenge because he believed Iwao had murdered his own father Summing Zhao. Also, it revealed that Lan Di's real name is Longsun Zhao. Ren also gets his answers. Yuanda Zhu reveals that when the Phoenix and Dragon mirrors unit they form a key to a massive fortune used to revive the Qing Dynasty. 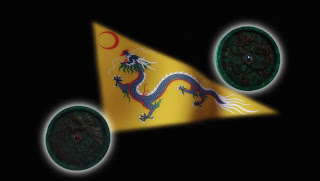 If you are wondering, the Qing Dynasty was the last imperial Dynastic of China lasting from 1644 to 1912.
Yuanda Zhu says for Ryo to get answers about his Father's murder and past he should visit Guilin where Iwao and Summing Zhao used to train together and where the rare Phantom River Stone that was used to create the 2 mirrors is found. Everyone supports Ryo's decision to continue his quest for the truth as the theme song begins to play. Ren notes that Ryo stopped touching the cut on his face that Lan Di gave him.
So far this scene is faithful to the games. Kind of strange to play the theme song now at the halfway point of this episode.
Ryo says his thanks and goodbye to Joy and Wong before returning to Man Mo Temple to do the same for Fangmei and the monk. He has one final talk with Xiuying where Ryo says he is not chasing Lan Di but looking for the truth. Xiuying gives him a Yin stone. 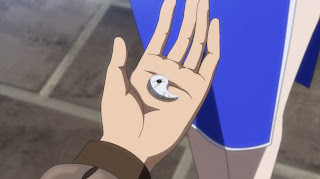 This stone is half of a Yin Yang stone that Xiuying's brother gave her but she does not tell Ryo that.
Xiuying tells Ryo that she does not want him to go down the same dark path that her brother fell down. Ryo says that to some extent he understands how her brother felt and that Xiuying does too while also being confident that her brother is alive.
What follows is a short montage to wrap up Hong Kong. Ryo says his final goodbyes to everyone, Joy pays her Mom's grave a visit and hints she will try to make things right with her Dad. Even Wong begins an honest job instead of steal, he sells banana's now. Although it is not revealed where he got the banana's to sell.
Cutting away, Ryo is on a boat to Guilin while looking at the photo of his Father taken in Bailu Village. However, the mountain path he needs to walk to the village hits a snag when heavy rain begins to fall. While by a lake, Ryo sees a small white goat downing in the lake and Shenhua jumps in to save it. In response to this, Ryo jumps in the lake to save her. They are finally about to meet. 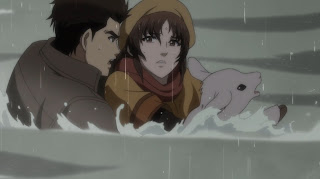 Ryo pleads with Shenhua to let the goat go because she could drown, but she refuses. Luckily, Ryo manages to grab onto a nearby branch and save both of them. Later, Ryo has a deep dream about his father before waking up in Shenhua's house who thanks him for saving her.
They are skipping their entire long walk together. Can't say I blame them but how did Shenhua get Ryo over the mountain path?
The two of them introduce themselves but Ryo rushes out the door once he learns he is in Bailu Village. Once outside, Ryo notices the Shenmue tree. This tree is a big part of Shenhua's life and she was even named after the flowers that grow on it. 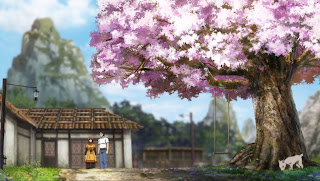 How symbolic.
Back inside the house, Ryo finds a diagram of the Dragon and Phoenix mirror. 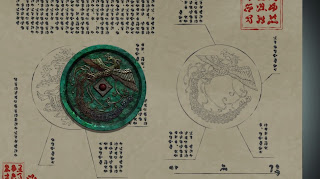 Shenhua tells Ryo about the legend behind the mirrors. There creation was ordered by the emperor long ago but several terrible disputes over them cost people their lives. Ryo asks to meet Shenhua's Father who would know more about the Phoenix Mirror. The two of them head into some mines where Shenua's Father has been working and find a sword and letter. 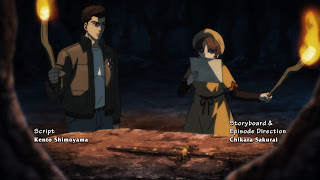 Shenhua reads the letter as the credits role. It is a letter from Shenhua's Father to her telling her that his life's work is complete and that Shenhua should follow the "bearer of the Phoenix". It also reveals that sword to be their family heirloom, the "sword of the 7 stars". The two of them go further into the cave where they discover a slot for the Phoenix mirror that reveals a big secret. 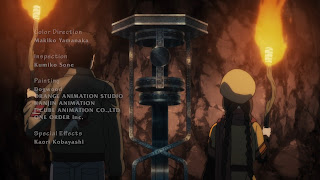 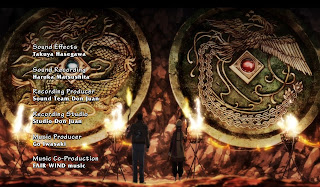 The sword was also needed to see this in the games. Kind of odd they cut that but left the sword.
Shenhua and Ryo are left in awe and both reflect. Ryo on his Father and Shenhua on the Village legend about the man "from a far Eastern Land across the Sea". The episode ends with them looking at the sunset. 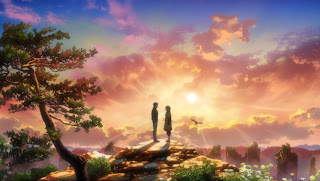 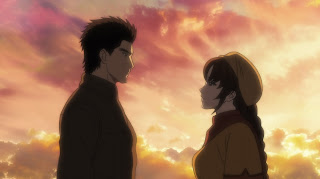 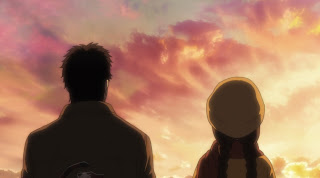 This episode did everything it needed to in order to conclude the second games ending. As always, there were cuts, mainly the path to Bailu Village, but everything important was there. I really liked the extra scenes with Lan Di, it added a lot for the characters. It was a great episode with an emotional ending. 5/5
I am feeling so nostalgic seeing this cliffhanger ending all over again. Never will I forget the long wait I had for Shenmue 3, hoping and wishing to find out what happens next. How that game turned out, I am not going into that here, but the story still has not concluded. We have been told via Twitter there is about a 60%-70% chance that this anime will get a season 2. While those are not most reassuring numbers to hear, they are at least better odds than a Shenmue 4 coming out. So, for now, I leave you with what they left all of us fans with, the story goes on. 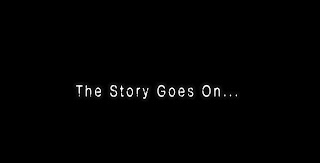