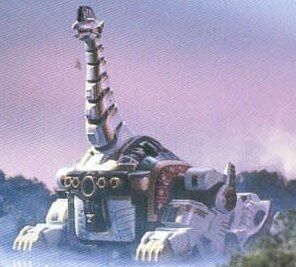 Well, this list is a tricky situation. My rules for these countdowns have been only 1 Zord per Ranger and no Extra or 6th Rangers. However, if you don't count Extra or 6th Rangers than there has only been 3 White Rangers so, following those rules would be impossible without limiting this list to 3. So, just this once I am going to have to break a rule, I will allow Extra Rangers but no 6th, which still barely puts us at 5 Rangers. So, click "read more" and let us see what is left.

Delphine, the White Aquitar Rangers Zord that looks very similar to Tommy's White Shogun Zord for no explained reason. The Battle Borgs barely got any screen time due to Alien Rangers only being 10 episodes long and them having to share giant battles with the Shogun Zords. Due to this, the Battle Borg really only makes the list because  there are so few options. This Zord does not have a cockpit and imitates Dephine's movements. Design wise, it looks like a person in armor. Nothing to special, but at least feels like a more practical Zord than most.

Design wise, the Kodiak Zord is probably one of my favorites. So simple, but cute and looks like it can fight. Hayley, the White Ninja Steel Ranger, also owns a dog named Kody that looks like the Kodiak Zord which only adds to the charm. Ninja Steel, all and all was not a great a season, but I cannot help but feel that somewhere out there, a dog lover tuned in just for Kody and Kodiak.

Dominic the Rhino Ranger is not technically a 6th Ranger even though he has all the same traits as one. Simply because Jungle Fury only has 5 Rangers (not counting Spirit Rangers), so since Dominic is the 5th member and not 6th he is an Extra Ranger. But, this shows why I normally do not allow them on these lists, because it is unfair. These Rangers have Zords that are meant to stand out; Rhino Zord is larger than the others, fights like a tank, and has its own Megazord form. At this point it is, the sequence has become routine, but this can still be a cool change of pace for any newcomer.

I know what non-fans are thinking, that deer is green not white, yes but it is owned by the White Wild Force Ranger Alyssa. One of 3 of her Zords, this one won over the Tiger Wildzord and Elephant Wildzord simply for its deity like presents. (Not because of the super cheesy song.) In battle, the Deer Zord is another arm with a big pinch. However, the story behind it makes it out to be pretty powerful. It has healing abilities for any Zord or human and could possibly bring the dead back in the Japanese version. Sadly, this Zord will be remembered most not for its power, but for the song that had to be sung too it in order to recruit it. 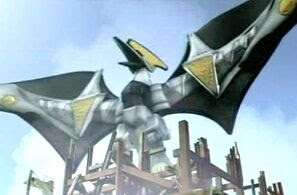 Trent's Dragozord was the coolest pterodactyl themed to date. The White Dino Thunder Ranger is like the Rhino Ranger, not technically a 6th Ranger because he was the 5th member, but the same principle. While this Zord does not become a Megazord without combining with another Zord like the Rhino, it is just too cool not to make the top of this list. While I think they could have done a lot more with the White Dino Thunder Ranger and his Zords, you cannot deny credit where it is due.
That is it for my White Ranger Zords. I'm not too happy with the fact that I had to allow Extra Rangers, but I suppose White is not a color that fits many core teams. Besides the order of the list, there is not a lot of room for disagreement, but if you do I would love to hear it. Until next time, peace out.
Posted by Cendoo at 12:00 AM