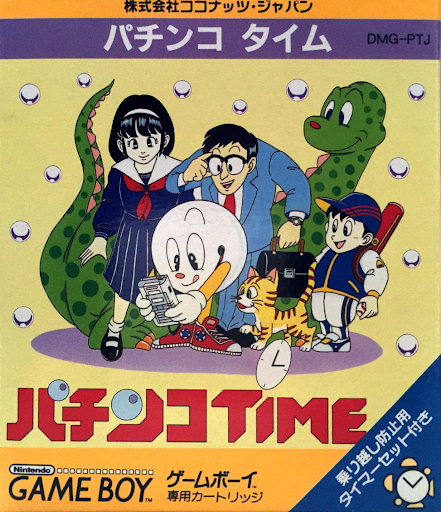 If you have never imported a retro game from Japan, you might not have run into these. Pachinko games are somewhat of an anomaly. They are ubiquitous in Japan, however they are completely absent in the United States. Consequently, when you look into importing for the first time, the cheapest options are usually pachinko games, and ever system has them.

Pachinko Time is a game for the Gameboy where you play as a pachinko ball walking around a pachinko parlor with access to several pachinko simulations. On each machine, you are trying to completely bankrupt the payout base of the game, Thus "completing" that machine. Completing three machines will open a path to the next pachinko parlor. If you can complete three machines, you are able to move on to another parlor with newer machines to play on.

Being a Gameboy game from 1989, this is very early in the life span of the system. And as it turns out, its only the second Japanese exclusive Gameboy game ever. Because this example is a mostly bare bones game, that makes it easy for a non-Japanese speaking player to navigate the menus and play the game.

I'm not going to lie. It's a weird game. On top of that, this appears to be the kind of a game where you are not supposed to really do it in one sitting. However, without the ability to read and operate a password screen, one shot is all I'm left with. Because of this, the physical cartridge comes with the drawbacks of not being able to pick up the game where you left off.

It is, however, a fun game and is extremely acquirable on eBay. Typically selling for around 5 bucks, though I came across mine for closer to 3.

Pachinko is a great game to have with you on the go, but these days I would revert to a digital solution. My Gameboy cartridge of Pachinko Time got a few plays here and there, but once I got ahold of an emulation device that supported save states, it now gets played quite frequently. Anyone who is a fan of American pinball and has any interest in Japanese culture should try a retro pachinko game at least once. They are niche beyond niche. But I do enjoy it.