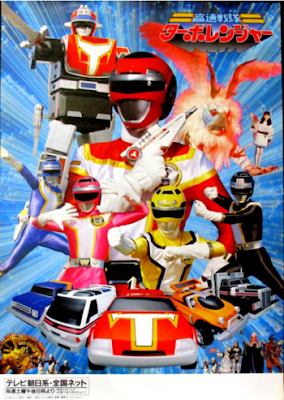 This is a strange case. When this season came out it celebrated the 10th year anniversary of Super Sentai as the 11th team, now it is classified as the 13th. Fun fact, there was a point in time when Gorenger and J.A.K.Q. were not counted as Super Sentai incarnations and Turboranger came out during that time. Anyway, what we have here is Sentai's first vehicle theme team as well as the first team of all high schoolers. Kousoku Sentai Turboranger, roughly translated to High Speed/Speeding Squadron Turboranger. Click "read more" and let's see what this first episode has in store. 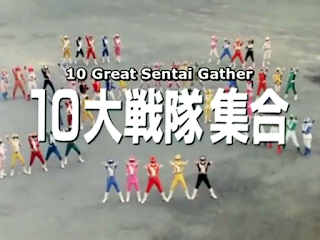 After a theme song, the episode begins by immediately showing us the villains. Glad we can get this out of the way. 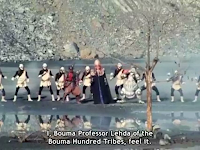 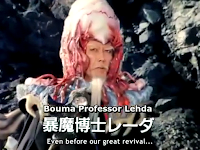 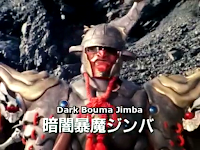 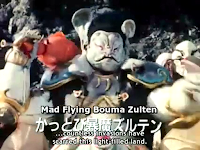 They are called the Bouma Hundred Tribes and give us our first taste of anniversary. Professor Lehda talks about how they can feel all the past invasions of Earth and we get a clip show of the previous season's villains being defeated. Now, the Bouma are out for revenge; but before they can do anything, the Turborangers appear to stop them. That was fast. 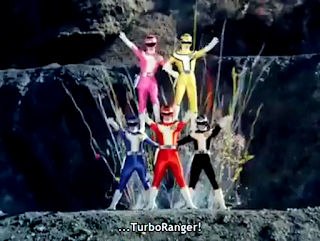 The rangers' identities are not yet revealed, but they are shown as Red Turbo, Black Turbo, ect. Also, they did not come alone as all past teams join them. 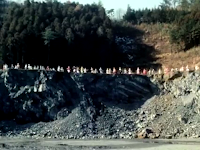 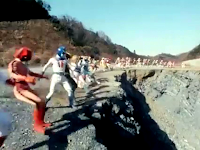 Not the last time this cliff shot will be used in Sentai history. If you are familiar with how past seasons ended, there are a lot of things that could be nit-picked. But, who cares, this is just for fun. Also, Gorenger and JAKQ are absent for reasons I already explained.
The narrator explains that the past teams came to cheer on the new team and the Turborangers all give heroic speeches. Pink Turbo begins a trend of flashbacks by introducing the first great team, Battle Fever J who jump out to pose and that leads to a clip show of their season. Hearing Battle Fever being called the first great team felt so wrong. 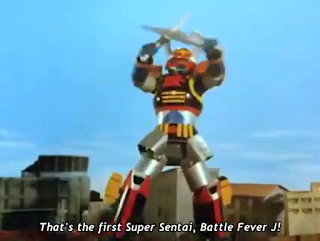 Let this sink in any hardcore fans.
The clip-shows continue for the other 9 teams present without any introductions; just cuts directly to them. These clip-shows are not quick introductions, they are almost highlight reels for the first handful of episodes for each season. Every clip-show has a narrator summarizing the team and the theme songs playing for each season. By the time every team is accounted for, more than half the episode is over. I would like to point out that none of the rangers that replaced one of their teams original 5 or team member deaths are mentioned.
Finally, after Liveman's flashbacks we cut back to the battle at hand. Red Turbo tells Bouma to just give up and they respond by blasting every team. From the smoke, the Turborangers rush forward and ask that all past teams stand down and leave the Bouma Tribe to them. Why? The episode ends just before the real battle begins with the Turborangers rushing forward and every past team saying "we're counting on you Turborangers". TO BE CONTINUED!

This episode was just a clip-show to celebrate Super Sentai history. Honestly, there is not much else to say. I like that the villains were introduced fast and seeing all the teams (minus 2) together was pretty cool even if they didn't do anything. The only real issue is why on Earth did the Turborangers not want any past teams to fight with them? I know, marketing, this was symbolic in passing on the torch and the season would probably have ended right here if they did help. Still, some in-universe reason would have been nice. How about, they do have a quick fight and the tribe retreats so the Turborangers tell everyone to leave it to them because they see this conflict will drag on and everyone else has already done enough? Whatever.
Overall, this really wasn't much of an episode, felt much more like a celebration special to promote the show and celebrate the anniversary. If you don't like clip-shows than you won't like this, but it was harmless and at least makes you want to see episode 2 just for the proper introductions. 3/5
Posted by Cendoo at 12:00 AM