The 25th anniversary season for Super Sentai and the footage source for Power Rangers Wild Force which aired in Japan from 2001-2002. Shout out to Shout Factory for the free legal english sub. Hyakujuu Senai Gaoranger, roughly translating to Hundred-beasts Squadron Roar Ranger. This theme is about animals with some environmentalism thrown in and the source of my personal favorite Zords or Mecha. How will this season hold the test of time? Click "read more" and let's take a look.

The episode begins, with the theme song! More importantly, after the intro we are shown a Mother reading her son a bedtime story. The story is jumbled by what sounds like various other people telling stories while street performers are shown and it is all interrupted by a narrator voice warning about dangers. All of a sudden, we see a monster crash through the window of a restaurant. 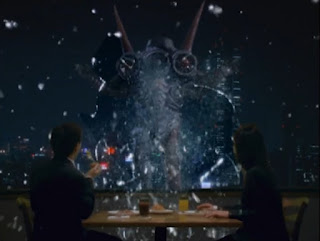 If you aren't really sure what's going on, neither am I. 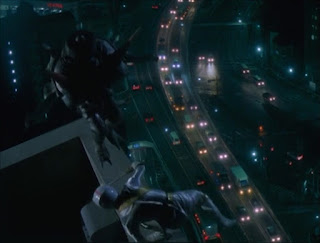 This monster is attacked by Gao White on the roof and the two duel.
Honestly, pretty cool camera angle.
The monster gets a hit in and makes some distance, just as Gao Black joins in the fight. He tosses the monster off the building where Gao Blue is waiting to drag it underwater for some more attacks. Finally, Gao Yellow flies the monster through the air and smacks it into another building.
The 4 Goarangers all corner the monster now, but a second monster appears, shoots electric blasts which drop the rangers and blows a chunk of the building out that causes an elephant to go lose and rampage. 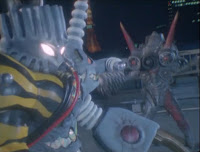 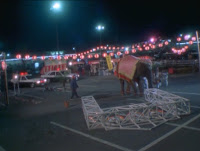 That just went from awesome to silly in an instant.
The police arrive and are about to shoot the elephant when a vet shows up and claims he can calm it down. He talks to the elephant, then closes his eyes and looks focuses and it works. (Possibly implying this guy is psychic.) After calming down the elephant, the vet climbs on top of it for some reason while some lady is watching in water from a distance. 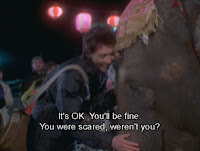 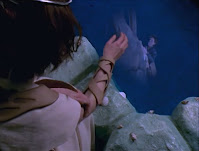 This could have been a touching moment. But, I could not help but be distracted by the fact that the elephant sounds exactly like Dragon Caesar whenever it yells. This makes sense because an elephant trumpet is how they got Dragon Caesar's roar in the first place. Also, it is clear that this season will be all about animal love.
Cutting back to the ranger battle, the two monsters get away and the 4 rangers are frustrated. They speak of needing a fifth member and reveal that the lady who was watching the vet is named Tetomu who will be the mentor of this season. Tetomu contacts them telepathically and says that the vet, whose name is Kakeru Shishi, from earlier has been chosen to become Gao Red. Shocked? Me neither.
The 4 GaoRangers find Kakeru helping a cat stuck in bush and kidnap him without giving him a chance to speak. Afterwards, Kakeru wakes up in the middle of a beautiful jungle inhabited by giant robot animals. Power Ranger fans will know this as the Animarium. 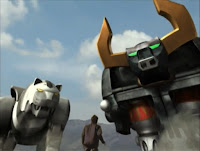 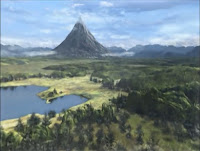 Kakeru is thrilled to see these giant beasts, especially the Red Lion. He climbs up a mountain cliff to try and see this Red Lion where he discovers that they are on a floating island in the sky. A zoom out shot reveals that the island is in the shape of a turtle and is called the Animarium. Looks like Power Rangers didn't change that name.
The 4 GaoRangers are watching Kakeru from the magic water where Tetomu announces that Kakeru will become the leader of the team because "whomever GaoLion chooses will be the GaoRangers' leader". Can't argue with that? Just as she predicts, GaoLion does in fact choose Kakeru who can apparently understand what GaoLion says and is given the mark. 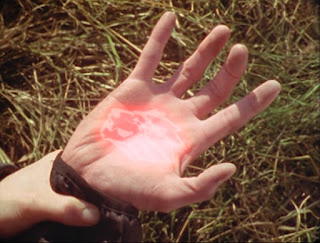 Looks like he is stuck with the task now.
From this mark, a small red sphere comes out that contains a miniature GaoLion inside it. 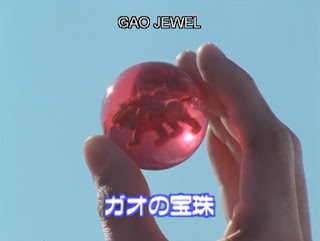 Those were called Animal Crystals in Power Rangers even though they look nothing like crystals. Also, geez this episode is introducing a lot.
GaoLion teleports Kakeru off of the Animarium and into a large rock back on Earth that appears to be where the GaoRangers HQ will be. 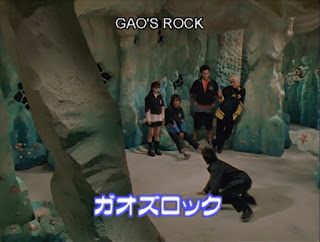 Tetomu introduces herself as a Priestess to Kakeru and explains the premise of the season. The mecha are called Power Animals, the villains are called Orgs who will slowly corrode the Earth leaving it lifeless is left unchecked, and Kakeru is given his changer which is called a G-Phone. 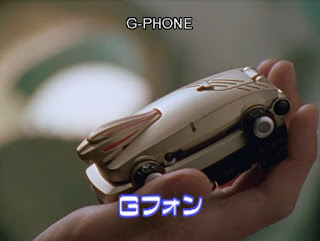 This season really wants to get all the basic explanations and setting out of the way. Could be a good thing depending on how the rest of the season goes.
Before Kakeru can process or understand any of this, he is literally dragged into battle as the two monsters from the begininning of the episode appear again and are attacking random people. Turbine Org and Plugma Org. 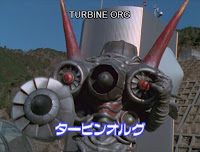 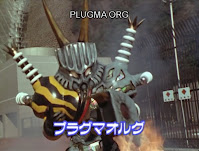 Before going any further, it seems like a good enough time to give the Ranger Roll Call. 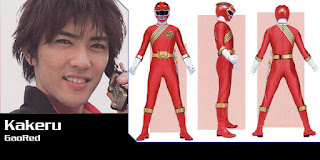 Kakeru Shishi - GaoRed. A kind hearted veterinarian who loves all animals and can hear the language of their hearts. This allows him to communicate with any type of animal including the Power Animals. An ideal type of character to showcase the love for animals and environment that this season is going for. In charge of GaoLion. 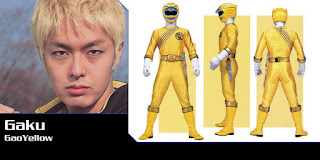 Gaku Washio - GaoYellow. Mr. Serious who often curses in English that goes through an arc to loosen up. A JSDF pilot and the first GaoRanger to be recruited while on a mission which resulted in him being MIA. He bleaches his hair to avoid being discovered. Basically, the stick in the mud of the group that also has a strict, yet respectable, honor code as he would even refuse to eat bird meat out of respect for his Power Animal GaoEagle. 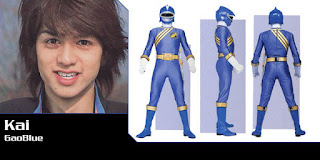 Kai Samezu - GaoBlue. The one who always says "never give up" and is constantly full of energy. Chosen second to become a Gaoranger. Has a background is bowling and hates being treated like a child. Can be summed up as the young energetic one of the group who charges in head first. In charge of GaoShark. 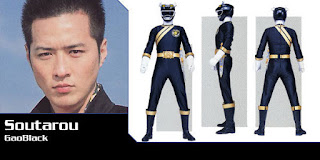 Sataro Ushigome - GaoBlack. Physically the strongest, but has a gentle nature with a weakness for the ladies. An ex-sumo wrestler who was forced to retire due to an injury and was recruited 4th, only a month before Kakeru. The classic brute with a heart of gold, but with more depth than just the cliché'. In charge of GaoBison. 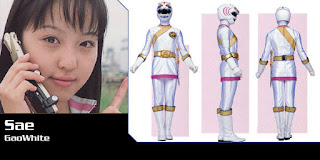 Sae Taiga -GaoWhite. The youngest and sole female Gaoranger which results in belittling by the others except Kakeru. Chosen third, she is a martial arts student and the most level headed of the team who always worries about the others. Strong, but still longs for a prince with a bouquet of roses. Sadly, another season that puts little stock into the female rangers but would not dare have none. In charge of GaoTiger.
For now. A 6th ranger and more Power Animals will come later. Back to the episode.
The two Orgs are attacking people on a bridge with no clear goal in mind. As the Gaorangers arrive, they all look to Kakeru expecting him to instantly be a leader. Amazingly, rather than get confused or freak out like anyone else would in this situation, he looks around at the injured people and scared animals and embraces his new role with a lot of fire in his voice. Now, it is time for the first group henshin. Fans of power rangers will find this change sequence to be no different from the Wild Force morph.

Gaku and Kai fight Turbine Org while the other 3 take on Plugma Org. All the rangers do their roll call in conjunction with landing an attack. This fight has a strong start for the Gaorangers, but once the two Orgs get together they have combo blasts that deal some damage. 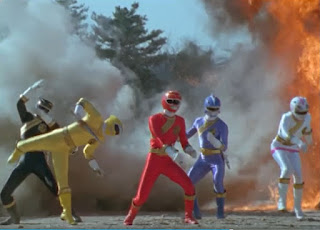 Yellow, that is not how you react to an explosion.
GaoLion sends Kakeru a message telepathically to basically tell the rangers to fight together instead of separately. This is used as an excuse to show off their weapons and combined form. Why weren't they using those weapons already? 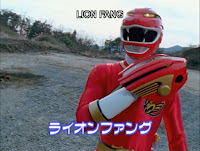 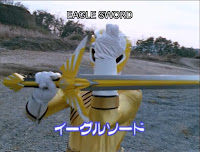 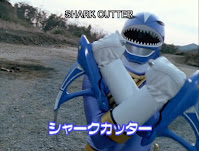 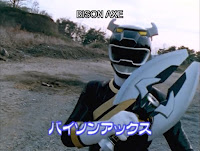 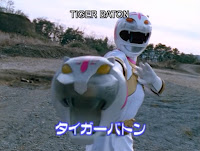 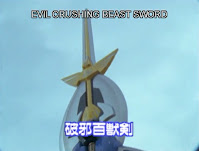 I forgot how silly the personalized weapons are in this incarnation. Only Yellow and Blacks look useful. Also, that is even more they are introducing in this first episode. Talk about wanting to cover all bases and fast.
This Evil Cushing Beast Sword unleashes a huge slash that destroys Plugma while Turbine limps away. While out of sight from the rangers, Turbine encounters 2 one-horned Orgs that introduce themselves as Duke Orgs who fight for Master Org. A white & purple one who carries knifes named Yabaiba, and a female sorceress looking one named Tsue Tsue. I don't get it. 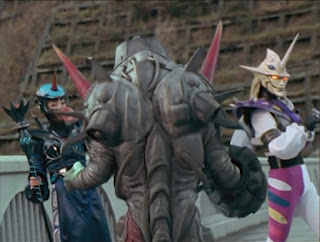 Yabaiba and Tsue Tsue ask Turbine if he will join them. At the same time, the rangers are searching for Turbine only to find he is now a giant. 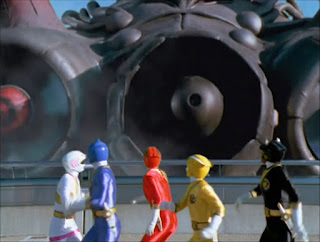 Tetomu is having a panic attack over this giant revelation when the Gao Jewels appear in the rangers hands and they are instructed to place them into their small daggers called Beast Kind swords. This causes a melody to play that summons the Power Animals. Some music plays and the Power Animals all take turns attacking the giant Turbine Org. At this point, they finally finish their roll-call by stating their Sentai name. 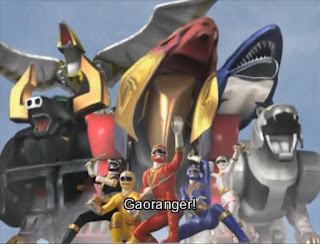 Moments like this that really show some of the benefits that animal Mecha/zords have over vehicle themed ones.
The 5 rangers along with the 5 Power Animals all fire beams that destroy Turbine Org. We end this episode with the narrator giving the generic "we won the battle but the war is far from over" speech and the the rangers let out a roar. The End! Yeah, I didn't mention this until now but there has been a narrator explaining stuff that doesn't need explained this entire time.
Side note, the credits sequence is creepy and spoils future Power Animals. Look it up.

To sum up this episode, it is jam packed. Almost everything needed for the basic setting of a Sentai season just shy of the combined Mecha (Megazord) and the names of any of the rangers. (Yes, none of the 5 rangers were introduced yet.) Not to say this was a bad thing. While it was a lot of things to process, all of them were things that was already expected and nothing was overly complicated. Action was good and the Power Animals are more interesting than just generic weapons. The only real issues I had was that the rangers forced Kakeru to join and while he did eventually want to, they never apologized for using force. Also, the pointless narrator and the fact that everything was named except for the rangers felt like a point missed in writing. Overall, this was a solid episode. While nothing anniversary was done yet, it is setting up to be a good ride. 4/5
Posted by Cendoo at 11:30 PM