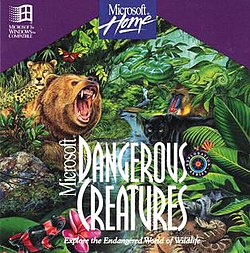 With the advent of Wikipedia and the mass accessibility of encyclopedic information through the internet, I think that most individuals my age and younger can't really appreciate just how lucky we are to live in an era of such easily available information.
When Wikipedia was launched in 2001, most encyclopedias were locked behind paywalls (like Encyclopedia Britannica) or were available on CD-ROM and large physical hardbacks. I remember very specifically growing up reading my dad's 1985 World Book Encyclopedia Collection.

Yes, I was the kind of kid who read encyclopedia's growing up. We are just going to move on from that factoid to the point at hand.

Of all the encyclopedia's that I had access to in the 1990s, Microsoft's Multimedia Collection was definitely one of the biggest surprises. In particular were two applications within the collection, Microsoft Dinosaurs, which I will absolutely talk about at another date; and the subject of today's retrospective, Microsoft Dangerous Creatures.

Released in 1994 and first available for Windows 3.1 (Yes, that old), Microsoft Dangerous Creatures was a multimedia encyclopedia on various aspects and members of the animal kingdom, with a sub-textual focus on environmentalism and conservationism.

Today will not be a review, but another retrospective detailing my memories and experiences with a "computer game" from my childhood that had a truly transformative impact on my life.

***
Microsoft Dangerous Creatures was such a quintessential part of my childhood. It fostered and fed my passion for biology and zoology, alongside TV shows like The Most Extreme and The Crocodile Hunter. I remember whittling away whole days perusing the various pages, videos, and games available to me in the application. The program wasn't a computer game in the traditional sense, but more of a computerized interactive book (another category I may touch upon in future articles).
Dangerous Creatures could be navigated in a variety of ways, each with their own advantages and focuses. Atlas enabled you to explore various different animals by their continent. Habitat focused instead on organizing animals based on their natural environment (grasslands, arctic, ocean, etc). Weapons turned the readers attention towards animals defensive and offensive tools, focusing on Jaws, Claws, and Venom specifically. The Index enabled you to search the entire collection of articles in alphabetical order.

Finally, the Guides enabled the user to take a series of 15 "guided tours", hosted by three unique tour guides. This was honestly the highlight of my experience with the program and the part that I remember most fondly. Your three tour guides each provided a unique experience and personality which came through each of their 5 tours. You first had Fergus, a beleaguered animal specialist who simply wished to provide a safe and educational tour through nature but is always hindered by the wild animals you met along the way. Fergus was voiced by Robert Zink, who was also the narrator who provided voices for each article and its subpages.

After Fergus, you had Tawney, the wildlife photographer voiced by Cindy Shrieve. She focused on animals that were particularly photogenic or on human's relationship with animals in specific environments. Her segments had a heavy focus on much of the conservation element which I will touch upon in a little bit. Finally, you had Safara, a kind elderly woman voiced by Annette Romano, who focused more on the cultural and mythological connections between different animals and their relationship with humans. For example, her Australian tour focuses much more on explaining the connections between animals and the Aboriginal Dreamtime than Fergus's more secular focus of an Australian Walkabout.
These three perspectives really helped to give the reader a wide scope of appreciation for the various animals presented. The tours also tried very hard to show as many of the various animals as they could, rarely visiting the same animal twice. I enjoyed it immensely.
Beyond the guided tours, there were also several simple games (mostly matching games) that could help entertain younger children and each article had a short video segment that would play to provide additional educational information or entertainment. Of course, nowadays these small low-resolution videos aren't all that impressive but in 1994, it was state of the art and a wonder to see as a kid even into the early 2000s.
Much of the information on Microsoft Dangerous Creatures has managed to remain relevant, coming from reputable sources such as the BBC and this means that, even if the technology is very simple, the knowledge contained could probably still entertain and educate a child today. I'm afraid I cannot say the same for its paleontological counterpart Microsoft Dinosaurs, but I will cover that at another time. Besides, the relevance of Microsoft Dangerous Creatures was absolutely essential in spreading the message of conservation, which it performs admirably.
It was through Microsoft Dangerous Creatures that I was made aware of the existence of the World Wildlife Fund and through them, alongside Steve Irwin and Animal Planet, a passion for endangered species and the principles of animal conservation and environmentalism. Even when I was growing up in a very conservative household and the principle of ideas like climate change were regarded as "liberal propaganda", it was the influence of Dangerous Creatures that harbored a nugget of science that would eventually blossom into my modern self. I still remember seeing the page entitled "The Deadliest of Them All" showing the picture of a human child, and that imagery has stuck with me into my adolescence.
I think that was ultimately, the biggest take-away from Microsoft Dangerous Creatures. Through this simple program, I gained a genuine respect and appreciation for the natural world that was enhanced by the presence of other influences, both old and new. Even as a child, my sense of global responsibility could be fostered and matured through such programming, and I think we desperately need content like it again.
The program is very dated now and you have to use emulators of old Windows software to even use the application, but I really think checking out this multimedia encyclopedia really is a blast from the past. I recommend you look for it, even if it is only to sate a sense of curiosity. This simple encyclopedia fostered a passion for animals that has persisted to this very day and even listening to that opening sequences of roars and screeches fills my heart with longful memories of simpler childhood days.
***
I would like to thank my monthly Patrons for their support of all of my content. You can join my Patreon for Behind-the-Scenes, Polls, and other fan interactions here.
MONTHLY PATRONS
Cendoo
Posted by The Brony Critic at 12:00 PM