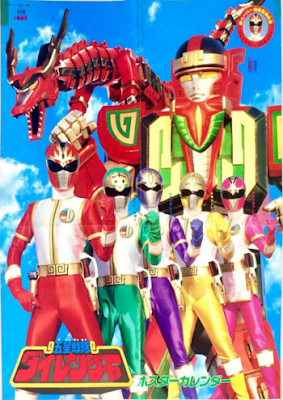 It's the missing Power Rangers. Gosei Sentai Dairanger, roughly translating to Five-Star Squadron Great Ranger. The 17th Super Sentai and the source of the Thunderzords from season 2 of Mighty Morphin Power Rangers. This season is an ancient Chinese themed one against an evil empire from 8000 years ago. How does it hold up? Click "read more" for my thoughts. 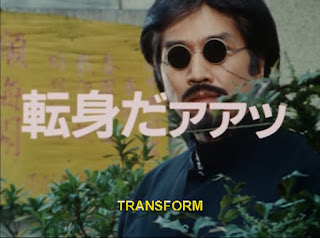 The episode begins, with a narrator introducing the enemy and who all the rangers will be. Wasting no time. Following that, we get two previews of the episode about to begin and then finally the opening theme. That is a lazy way to establish the setting.

As the episode begins properly, we are shown a kid playing with a yo-yo and singing a love song while having an ominous eco to his voice. 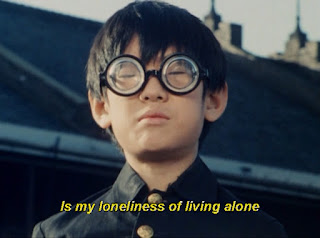 Those are glasses from parents who just don't care.
Cutting away, we see Ryo working in a restaurant. (The narrator already informed us he will be the Red Ranger.) Ryo is complaining about taking out the trash that he ends up dropping while some creep in sunglasses is watching him. (See title card.) While picking up the dropped trash, Ryo's friend Yumi rushes over to help only to get grabbed by a monster with a tentacle in the bushes. I don't like where this is going.

Ryo gives chase after Yumi, but is not fast enough and she gets pulled into a hole with her shoes and backpack spiting back out for some season. The tentacle monster starts beating up Ryo who runs away and is almost killed until he is carried off by a giant red dragon. Power Ranger fans will know this beast as the Red Dragon Thunder Zord. 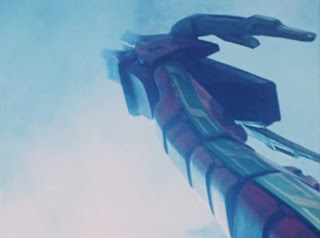 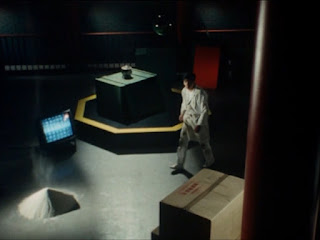 Ryo wakes up in what appears to be crudely designed secret base. Complete with a monitor, a center piece, glowing orb, and a cardboard box. He freaks out and starts running around the base and its various rooms. He finds 5 motorcycles that are color coded for the rangers and the red one comes to life and chases him. A few other shots to estables the base later, he finds his way outside and gets pulled back into the base by 3 other men where a man named Kaku is waiting for them.

And you thought Power Rangers didn't care about the girls.
Kaku names the tentacle monster from earlier as Baron String and states that the villains of this season are called fiends called Gorma. More importantly, he says that Ryo has the "Chi" power inside him that is the only power that can stop Gorma and attempts to recruit him. Ryo is hesitant at first, but after Kaku gives a demonstration of Chi power, the other 3 are convinced he can do it. They introduce themselves as Shoji, the arrogant one in a jersey, Kazu, the polite one in a suit, and Daigo, the edgy one that kept his distance. 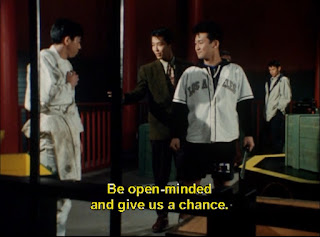 That is really giving the bare minimum as far as character traits go.
Kaku announces that they will all be Diarangers along with 1 more later and have no choice but to fight the Gorma who else humanity will be wiped out, then it cuts away. Wait. After a commercial transition, we see one of the Gorma, Commander Gara as she watches what can be assumed to be UFOs.

I wonder if she is from the desert.
More villains are introduced. 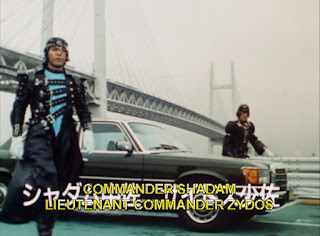 I hate it when characters are just thrown at us with no time to process in-between.
These three villains are spying on a girl with glasses, then send a biker gang to attack her. Why? So, for the next several minutes we get to watch some girl run away from dudes on bikes through various places and buildings. 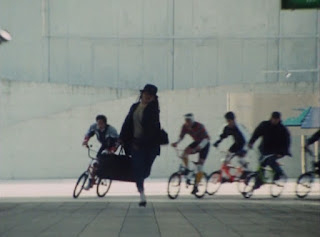 I really want to ask someone Japanese about this. If you were a kid in the early 90s and were flipping through channels, would have come across this and thought, "Super Sentai"?
Luckily, this girl is an amazing athlete who already has control over chi and fights back. Not so lucky, she still goes flying and is caught by Ryo who is with the other 3 Diarangers and it is implied they all accepted the role off screen. Pretty coincidental that they were there. The bikers reveal themselves as this seasons foot-soldiers, the Cotpotros. What on Earth does that mean? 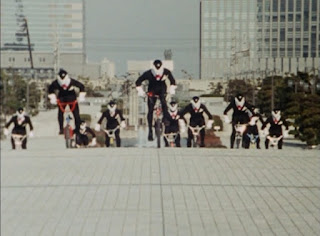 The grunts are tuxedos and masks with white gloves. I like the Z-Puttys better.
While running away from the Cotpotros, the gang introduce themselves and it is explained that this girl came from China and was already familiar with Kaku. (That explains the chi use at least. If you're wondering, when chi is used they just thrust their hand and wind is blown.) Finally, they fight back and steal some of their bikes to escape. What follows is a comedic chase with slapstick that firmly establishes that the Cotpotros can disguise themselves as humans. It ends with the Diarangers crashing into a truck. Out of nowhere, that singing yo-yo kid from the beginning comes back and reveals himself as Baron String.

That was creepy. I wonder what that kid went on to do. Gou Fujida, did you brag about this part in school?
Baron Strings grabs the 5 of them with his tentacles and begins throwing them around while ominous music plays. Just before Ryo gets stabbed, he remembers Kaku telling him to focus to use chi and is able to grab/throw one of the tentacles back at Baron Strings. Now, finally it is henshin time!
The transformation sequence is skipped past, but we still get the epic roll-call and posing. These poses look like they took quite some practice. Now it is time for battle.
The fight itself is nothing too special, but not bad. One of the rangers fights dirty with a low blow, but most of it is just the basic attacks. That low blow raises so many questions. Do those grunts reproduce? Ryo fights Baron Strings on his own and some martial arts stances are shown off. This is used to show off the duel daggers that Ryo (and possibly the other 4) have as their holster weapons. At last, Ryo shows off a finisher called Heavenly Fire Star Lighting Blaze Destruction. A long name for basically a flamethrower with lightning. 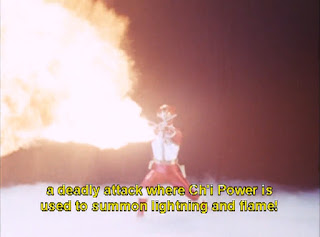 Baron Strings is down and releases all the people he swallowed. However, not yet defeated, Baron Strings pulls out a bomb that turns him giant. The rangers look stumped, but then we see Kaku doing some intense meditating and out of nowhere Ryo knows how to summon his mecha, Ryuuseioh.

Ryo rides on the red serpent dragon Ryuuseioh's head into battle as the episode ends on a cliffhanger. Typical.

This episode was okay, but there were a lot of corners cut. This was a case where the season wanted to get introductions and setting out of the way as fast as possible; as a result, some scenes like Ryo agreeing to become a Dairanger were done off screen. Also, they never even bothered to say the Pink Ranger's name, HououRanger. Yes, I know her name is Rin. I have internet too. My point is that the episode never said it. Characters so far are token, especially Rin who feels like she literally only exists to fulfil the mandatory girl ranger.
Fun fact: I say mandatory girl ranger for a reason. While Toei has a habit of seeing the female rangers as much less important, Sun Vulcan didn't have any and the ratings took a hit because of it. Since then, every season has at least 1.
Despite the shortcuts, this was still an okay episode. The Chinese Chi is an interesting idea and the suits/mecha are cool. Action decent, if not short. But, at the same time, it was paced well with no dragging points. So, let's see if part 2 can comfortably introduce this season. Until then, pass. 3/5
Posted by Cendoo at 12:00 AM