The setting is given via a work log and some notes hidden around the work site. Santa went crazy and slaughtered a bunch of elves and reindeer. Now, a Janitor has been called in to clean up the mess. A very simple but appropriate plotline for a game that is clearly not made to be story driven.
Personally, I like to think of this as the follow up to Weird Al's The Night Santa Went Crazy. 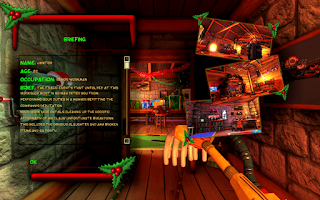 As the janitor, it is your job to mop up all the blood, dispose of all the body parts and trash, and fill in any bullet holes in the walls. There are blades, bullet shells, and empty & broken bottles of Eggnog and alcohol everywhere. Just like the main game, everything, including the mop buckets, must be burned. However, this time we are using Santa's fireplace to dispose of everything. Machines dispense unlimited water buckets and waste disposal bins.

There is also a tool that helps detect any missed things to burn or mop up and a quiz that can be taken at the end of the level for those who like to go the extra mile for 100% completion. That's generally all there is to explain about game play.
It is a very addictive type of game play, especially to perfectionists like myself. To other types of people, I admit, it can get a little repetitive. However, the game play is true to the main game. Judging the DLC alone, there is no major changes to the gameplay other then the fire place being used instead of the incinerator.
There are some new achievements for this DLC like, stealing a collection of toys, Santa's shotgun, Rudolph's red nose, or elf heads, doing a perfect job cleaning or leaving the place even worse, and destroying specific items. All decent ways to encourage replay value.
A nitpick that follows over from the vanilla game is the some broken physics. Sometimes things move and react appropriately, but often stuff will bop around and fly all over the place. Especially when carrying objects. However, this never gets in the way of game play too much.
Overall, game play for this DLC is simply another stage that can be a funny twist on Christmas.

Nothing changes from the vanilla game in the audio department apart from including one Christmas song. The sound effects in this game are exactly what you would expect them to be from the mopping, slushing, exploding of TNT, and broom sweeping.
Music is an optional feature. By that, I mean there is a radio in the work areas that the player controls. 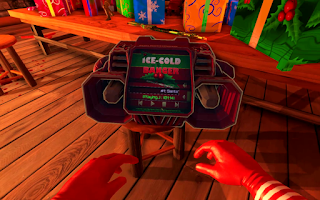 The songs are all Christmas themed with funny names, but mostly sound pretty stock. Nothing special, but good enough. Plus, you can simply toss the radio into the fire. (Achievement.)
Overall, audio is just fine. Not groundbreaking, but nothing wrong with it.

Graphics from this title take the core game and add Christmas themes to them. Aside from the workshop itself, the biggest example are the new red elf gloves the Janitor uses. Praise should be given to the level of detail for the murders and and position of elf bodies.
The stage itself is a pretty good interpretation of Santa's workshop. There is Santa's room ,a reindeer stable, and plenty of toys. The only problem I have is that there does not seem to be any area in which toys are made, no assembly line or machines. One could argue that this is not the factory and just the Lobby, stable, and Santa's living quarters. But, that is still a big oversight.

Santa's Rampage is a fine DLC level for fans of Viscera Cleanup Detail. If you are a fan of the main game then you will enjoy this addition. While it does not add a lot to the vanilla game, it adds enough. At the same time, the DLC stands out on its own so it is not mandatory for anyone who has the base game. Overall, if you are a fan of Viscera Cleanup Detail, then this DLC level will serve you well. Everyone else, it will not make the game anymore appealing.
Writing - 6/10
Game Play - 8/10
Audio - 3/5
Presentation - 4/5

Happy holidays everyone, this will be my last article of 2020. See you in 2021 where hopefully the world will turn back to normal.
Posted by Cendoo at 9:47 PM