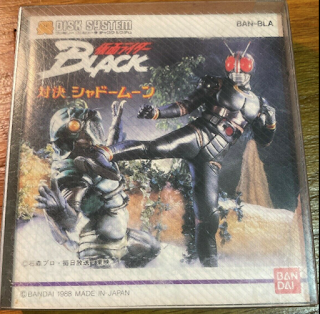 "I love being alive." These are lyrics from the theme song for the classic Japanese TV series, Kamen Rider Black.  Yes! A Kamen Rider Black game! With all the crazy stuff that went down in the show, it sure needed a video game.  Sadly, be careful what you wish for.  Not all that glitters is gold and this game is one of those cases.  They need to change one of the lyrics of the show to, "I don't like being alive!" it's that bad. Why is it bad? Read my review to find out.  (Click on "Read More" to read the full review.)

Ah.  My old friend, Kamen Rider Black.  The classic story about how Kamen Rider must stop the evil Gorgom and save the world from their slippery evil fingers. (Used to call them the Golgom. They were called that in the sub that I watched, but they are the Gorgom here.)  That's the basics for what that show is about.  Check it out. It's a good series.

The story of this game is an incredibly streamlined version of that found in the TV show.  A lot of characters and plot points are missing. Only the basic plot of the hero must stop the evil bad guys bits remain.  This game is also presented in a way that has nothing to do with how the TV show's story progresses.  You'll look at it and say, "I know these characters, but that's not how the story went."  It's really frustrating, honestly.

It's a platformer that resembles games such as Castlevania and Ninja Gaiden.  Nothing much to describe.  You go from left to right, fight re-spawning goons, and go through boss fights.  It's action platformer 101.

Does it do anything different that no other action platformer had done before? A little bit.  He has a big move set, where he can punch, kick, dive, and do some impressive air attacks.  It's like they crammed a six-button attack lay out into a two-button one.  It plays like that too as 99% of the time it was a chore just to get something to work.

Punching and kicking is fine, but the rest of the moves aren't very responsive and only wanted to work when they felt like it.  Trying to make tricky jumps was difficult because he only jumps forward with a certain command.  There's a lot of tapping and mashing to get simple actions to work.  He also walks very, very slow and doesn't turn around instantly when you change directions.

Yup! Our hero is just a pathetic love sponge that absorbs hits and can't fight for jack sh*t.  Especially since the small baddies constantly re-spawn and fire projectiles.  Here's the weird thing though.  Instead of fixing the controls, devs just made all of the baddies more pathetic than you.  They are super weak and Kamen Rider can take a lot of damage.  This game is oddly balanced.

Does that mean that this game is fun? Hell no! But the game does give you a chance to see what it has.  Plus, it gives you false good memories about the game that fade away once you start playing the game again.

Each level has four bosses that you must fight.  These guys are even more pathetic than the weak goons.  They can't take a hit and they are easy to figure out.  It's not until the second half of the game where the bosses become even a slight threat.

Don't worry.  There are some specs of corn found in this poop-pile of a game.  The motorbike levels are quite fun.  Riding around feels so free and it controls smoothly.  His punch is ridiculous too.  The hit box of it extends way further than his fists, letting you hit baddies that are higher and lower than you.  If the whole game played like these sections, it'd be a much better game.

Lastly, this game has a save feature.  Want to get past level three but have no time? No worries. You can save and return to the game later.  One of the neat benefits to it being a Disk System game.  If this were a cartridge game, it'll be a pretty safe bet to say that it wouldn't have a battery back-up. 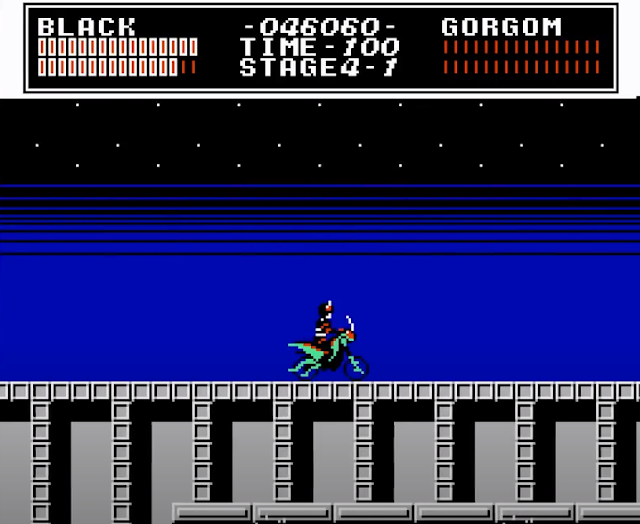 Other than the sprites of out hero and the bosses, nothing in this game screams Kamen Rider.  The levels are just generic themes that you see in every other platformer.  The goons looked like ripped-off Castlevania baddies.  The coloring and design are bad with very plain sprites and levels.  It looks like an unfinished game that was rushed out before the season finale could hit TV.

I like hearing the Kamen Rider Black theme, but the way it was converted for a Nintendo game is poor.  Sound levels are all over the place.  The chippy beats peak a lot and it hurts the ears.  It sounds like that it was slapped together in one minute.  It's an undercooked mess.

Overall, Kamen Rider Black is a mess of a video game tie-in.  Just another cheap cash-grab title for a system that's already full of them.  It's not worth your time.  3/10 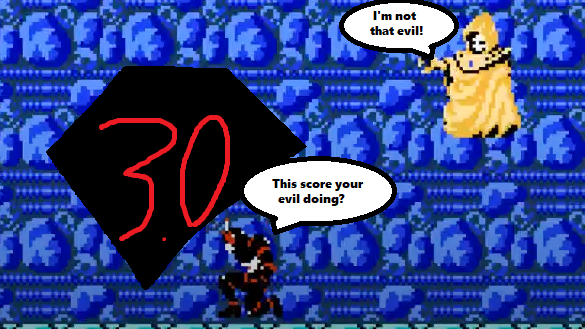 Posted by Retrokaiser at 6:17 AM