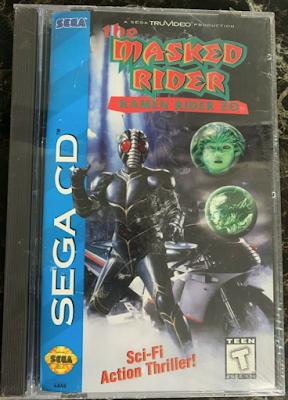 In a time before Masked Rider aired on American TV back in 1995, there was another attempt of exposing Kamen Rider to an American audience.  In the previous year of 1994, America got an unexpected release for the Sega Mega CD.  (Yeah, I know it was just called the Sega CD in the US.  I'm Australian.  Get over it, mates.)  Kamen Rider ZO the game hit US shores under the name, The Masked Rider: Kamen Rider ZO.  A silly name for sure.  It translates to The Masked Rider: Masked Rider ZO.  But that's enough of the Wikipedia history lesson.  Let's see if this sucka is any good or not.  (Click on "Read More" to read the full review.)

On a nice, peaceful street an unexpected threat pops in out of the blue.  A naked and dangerous man is on a mission to terminate a young John Connor.  John is now running for his life ever since that terminator had found him.  John is soon about to discover that he has a white knight that's out to rescue him.

Riding his noble steed named, Yamaha, the good terminator is willing to protect John at all costs.  Sadly, their enemy is more advanced than our hero.  This isn't going to be an easy fight to save the future.  Oh, wait.  That's the plot for Terminator 2.

The real story of this game isn't too much different from that classic Hollywood blockbuster.  The only differences is that our hero and villains were lab experiments in a gene-splicing project gone both right and wrong.  The good guy is a motorbike rider who can transform into a half-man, half-grasshopper fighting machine.  The bad guy is just a more advanced version of our hero, but he is permanently in his humanoid grasshopper form.

The John Connor of this story is a little boy who is the son of the evil professor that was behind this experiment.  The bad guy is out to get the child, while the good guy is out to save him.  Oh, yeah.  Our baddie has some other evil humanoid animal hybrids by his side.  Other than that, it's Terminator 2 with Kamen Rider.

I'm not complaining about the unoriginal plot.  It's fun, entertaining and makes me want to go out and watch Kamen Rider ZO.  (Not to be confused with Kamen Rider Zi-O.)  I also liked how the story was put together.  They took several episodes and pasted them together to form a stand-alone Kamen Rider movie.

Seeing as this is a Sega Mega CD game, it's going to either be a platformer or an FMV game.  It's an FMV game.  Nothing much to say other than you've got to hit certain buttons at certain times, while the video scenes play out.

Your character and the baddies have health bars.  Hitting a button at the right time will cause the enemies health to drop, while missing or hitting the wrong inputs will do the obvious.  That obvious being you losing health.  Lose all your health and it's game over.

The concept isn't very good, but it's not the worst thing in gaming history.  There are ten stages in total with only three of them feeling like proper stages.  The rest are super short and one is even skippable.  How is it skippable?  Well, this game has one extra bit of gameplay.

There are scenes where you can choose a path from multiple choice.  Some will reward you with shortcuts, some will punish you with instant death, others will just be useless.  It's nice to see the devs try to spice up this game.

Whoever programmed the timing of the buttons with the video did a very excellent job.  I also liked how they did a bit more with this system other than the hit equals success, miss equals failure.  There's an extra layer in between.  During the parts where the characters are clashing, you can both get damaged.

So, keep an eye out for the timing of the video as well as the inputs.  Hitting a button before the characters clash is the key to having a damageless run.  It's the little extras like this that makes the game a bit better than what it should be.

Sadly, this game is short.  Really short.  You can beat this in fifteen to twenty minutes if you do a deathless run.  This is easier than you'd think.  This is good as you do not have unlimited continues.  Surprisingly, I enjoyed replaying this game just to see if I can get a good high score and a perfect run.

Since most of us were watching the terrible English Masked Rider show back in the day. (Because none of use would've been playing this game during it's first year of release in 1994.) We were very confused seeing that this game got the T rating.  Masked Rider wasn't super violent, but Kamen Rider is.  Okay, maybe not super violent, but this game uses uncut footage that would not air on Fox Kids.  You've got kicks to the head, impalement, and a scary final boss that would scar us for life.

It's a shame that this is a video heavy game for the Mega CD.  The video quality is super grainy.  So much that it was hard to make out what was going on during some scenes.  They should've made a high quality laserdisc version, but that was probably a little too expensive to do so back in the day.

The sound also suffers from Mega CD-itus.  It's fuzzy, it's clippy, but it was also awesome.  There's a so bad, it's good English dub that makes me even more sad that this was limited to a Mega CD game.  With meme-worthy lines like, "That's just your older brother. He is a failure" and little kids that sound like old men, you are bound to get a laugh out of it.  It should've been released as a stand alone movie.

Overall, very ballsy move releasing Kamen Rider ZO to an American audience in FMV video game form.  While it's one of the better FMV and Kamen Rider games, it just barely misses the mark.  If the presentation was a bit more higher quality, it'd be one of the few FMV titles I'd recommend.  Not being able to see the action well is this games death nail.  Would've been better if this game were just a direct-to-video movie instead. 5.8/10 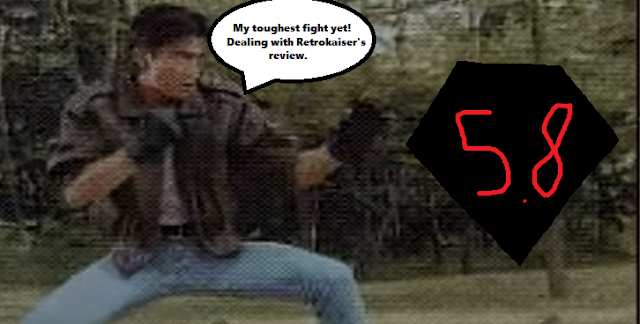