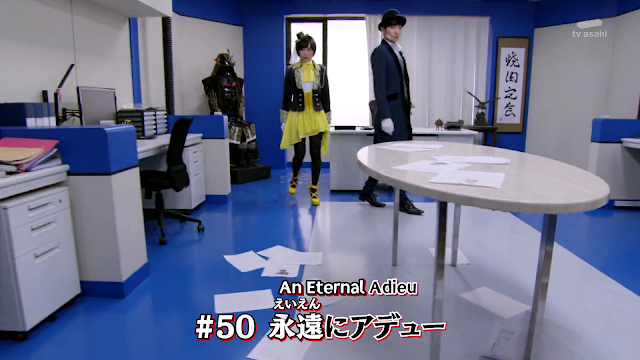 It's almost over. Last time, Lupin Red took his final stand against Zamigo and Dogranio defeated all the rangers which caused Tooma and Umika to be hospitalized and captured by the Patrangers. What will happen? Click "read more" and let's see if they dud this right.

This episode picks up immediately where the last one left off with Kairi and Zamigo's duel going in full force. At the same time, the Patrangers are dealing with gaint Pordermen attacking the city. 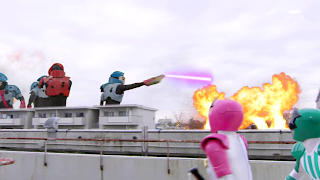 The Patrangers quickly defeat this not so scary giant threat and give an unenthusiastic "mission complete". There is a lack of satisfaction in a small victory that is promised to be followed by a terrifying threat.

Elsewhere, Tooma and Umika regain consciousness at the Global Police's hospital. Tooma knocks out the officer that came in to inform them of what happened and the two begin to escape. Cut to intro. Why weren't they handcuffed to their beds?

One theme song later, Tooma and Umika have broken into the Patrangers HQ and began looking for their VS Changers. However, Tsukasa and Sakuya caught them in the act. 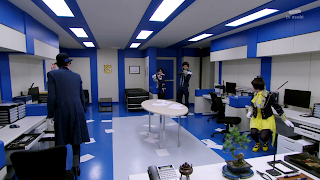 Tooma and Umika don't give resistance, but plead their cause. With heavy emotion, they state that Kairi is fighting alone and they want to hurry to his aid so that they won't loose anyone important to them again. Tsukasa and Sakuya quickly give in and tearfully place their VS changers on the table. Umika and Sakuya were especially emotional. Sakuya, wishes that he knew Umika 2 years earlier so he could have helped her and prevented her from becoming a Phantom Thief, but Umika states that if non of this happened then the two of them would not know each other as well as they do. Aw

Cutting away, Tooma and Umika arrive just in time because Kairi was about to lose his duel. Interesting, they usually just let the Red Ranger shine in these moments. But, how did blue and yellow know where they were? The three rangers escape the battle.

Outside the battle area, the three Lupinrangers decide to change their vow. Originally, it was if one falls the others will fulfill their wish, now it is that the three of them will stick together. If this was Power Rangers, they would have had that realization a lot sooner. 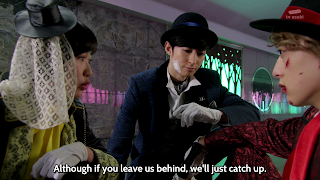 Even Noël Takao shows up to join on this new vow. 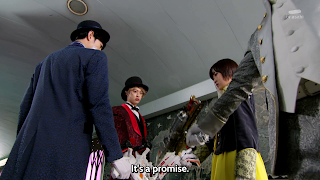 Noël Takao has a plan to defeat Zamigo and he has taken the Patrangers Bike and Crane. I should have figured they would eventually get the few upgrades the Patrangers got to the Lupinrangers. A cut away reveals that Keiichiro gave the Bike and crane to Noël Takao. 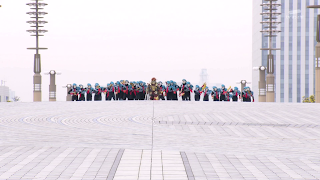 Elsewhere, Dogranio is on the move with a small army of Pordermen. he launches some pretty nasty attacks that quickly tare up the city. So, while the Lupinrangers are battling Zamigo, the Patrangers get the fun of fighting the Gangler's leader. I wonder how well the Patrangers can fair now that their best weapons are in Noël Takao's hands.

Both teams give their I will win speeches, do an overly enthusiastic morph and the two battles begin cutting back and forth. The Patrangers quickly defeat the Pordermen and charge towards Dogranio. At the same time, the Lupinrangers go all out against Zamigo. Kairi steals one of Zamigo's guns and fires at him; however, Zamigo dodges and Noël Takao takes the hit which freezes him. 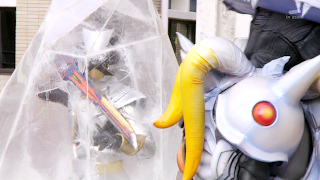 This reminds of an old SNES issue of Nintendo Power.

However, this was part of a plan. While Kairi and Zamigo were in a struggle, Kairi was able to warp Noël Takao close to Zamigo where he was able to steal one of his collection pieces. 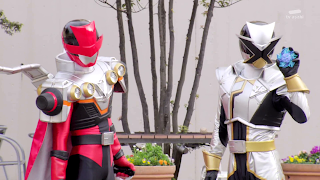 Now, Zamigo can't turn liquid and avoid damage anymore so the upper hand goes to the Lupinrangers. Unfortunately, this is interrupted by the fused Patrangers being flung into the battle after being beaten by Dogranio. I predicted the Patrangers would lose but I didn't think it would be off screen. That's lame. 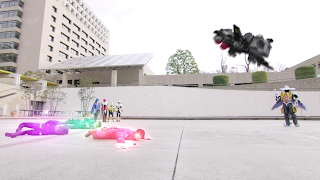 Dogranio launches another attack to finish off the Patrangers, but Noël Takao jumps in the way and goes flying. After this, Zamigo shockingly requests to be absorbed into Dogranio's safe. 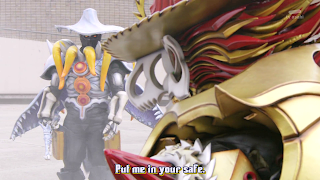 Why? So Zamigo can finish the battle without being interrupted by anyone, including Dogranio, even at the cost of his freedom. Kairi, Tooma, and Umika take the bait. They give some of the collection pieces to the Patrangers and follow Zamigo into Dogranio's safe. Now, the stakes are raised. Before going, Kairi tells Noël Takao and Keiichiro to protect the piece of the world. How corny, but it works. Once inside the safe, the Lupinrangers see flashes are crazy images before landing in a somewhat peaceful meadow where collection pieces float through the sky.

I count plenty more re-used props from past seasons.

Once again, the Lupinrangers begin battle with Zamigo. On the outside, the Patrangers get up again to challenge Dogranio. There are some pretty cool cutaway effects and plenty of blows are dealt. For the Lupinrangers, things aren't looking good. Tooma and Umika try to open Zamigo's two safes only to find they're empty and they both get freeze shot and shattered as a result. Oddly, they actually pushed buttons on his safes.

However, this, once again, was part of a plan. A flashback reveals what Noël Takao's plan was from earlier. Dial Fighters can open safes and Trigger Machines can close them. So, ironically, the Lupinrangers didn't try to open the safes but instead they sealed them with new combinations. Now, Zamigo can't access his guns and has pretty much lost. For clarity, Zamigo's ice gun that freeze people only have one shot each but his safes have an endless amount of them.

Now, the powerless Zamigo desparately tries to fight back using Tooma and Umika's guns, but is quickly overpowered. Kairi finally defeats him with his "Stealing Super Super Super Strike" that blasts a hole in Zamigo which kills him. 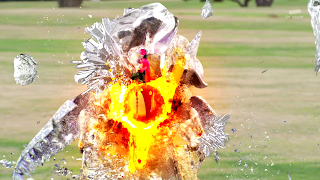 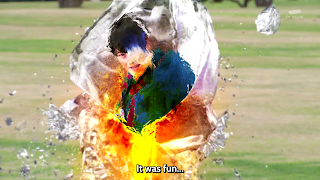 For this plan to work, Tooma and Umika really did have to suffer the same fate as their lost loved ones. Even for a moment, that was bold.

With Zamigo's defeat, all of his victims returned. The Lupinranger's wish has been fulfilled. 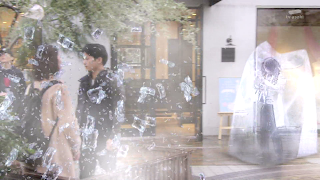 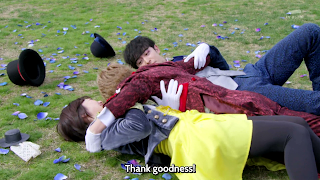 The three of them have a tearful happy ending. 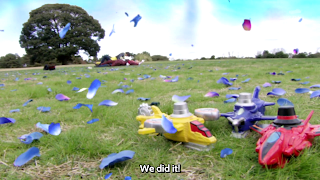 Except... they're still in Dogranio's safe with no way to help the Patrangers outside. 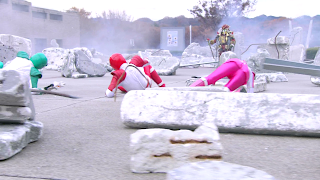 The episode ends with Dogranio reminding the Patrangers that the Phantom Thieves cannot escape and we are teased knowing the final battle is all up to the Global Police. Wow, it's like, this whole season the Lupinrangers did all the heavy battles minus the collaboratings with the Patrangers, and now it's all up to the cops.

This episode was both a teaser and a finale while being non stop action and emotions. In other words, a lot of fun. I am honestly shocked by the cliffhanger ending too. This whole season was heavily favoring the Lupinrangers, this episode included, so I never thought they would give the final battle against Dogranio to the Patrangers. At the same time, it makes sense. Since the Lupinrangers were trying to restore Zamigo's victims and the Patrangers were trying to protect the Earth from Dogranio's invasion, it makes sense that these were there matching opponents. Gold star writers. 4/5
Posted by Cendoo at 12:00 AM