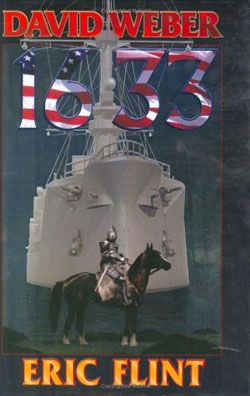 Last July, I released my review of Eric Flint's first novel in the Ring of Fire series, 1632. I expressed at the time how I wanted to review and show off all the books in the series, as it has long held the position of my favorite literary series of all time.

But for whatever reason, I never did get around to reviewing the sequels to 1632. Of course, the series is quite prodigious, with more than 2 dozen books and hundreds of associated short stories through the Grantville Gazettes. So going book by book like I often do with my reviews of film series would be rather ridiculous and completely dominate the majority of weeks that I have access to with the website.

But I do want to get through  and review each o f the series' main titles at some point or another. And it is with that spirit in mind, that I will take a look at the second book in the Ring of Fire series, published in 2002, 1633.

This is the book that truly lays the groundwork for the rest of how the Ring of Fire series is written. While 1632 might have introduced us to the world, it is 1633 that solidified and established the outside world with sufficient enough details for future arcs and story lines to be expanded upon.

1633 reintroduces us into its alternate history of Early Modern Europe in a rather subtle fashion and utilizes the authors distinct approach to world-building, with ground-eyed views by common everyday characters and deep background references, to flesh out a monstrous series of plots and subplots which the succeeding 1634 novels will then resolve or continue upon.

The story starts us only a few months after the conclusion of 1632. The arrival of the Americans and their alliance with the Swedish king Gustavus Adolphus as fundamentally shifted the political landscape of Europe. Their Confederated Principalities of Europe, a hodge-podge collection of German states nominally under the control of the Swedes and Americans led by Mike Stearns, continues to struggle with political and cultural unity as their neighbors begin to take notice of the fledgling nation now popping up in Central Europe.


In an effort to stem the tide, Rebecca Stearns, Michael Stearns wife, leads a diplomatic mission across Western Europe, traveling to France, the Spanish Netherlands, Holland, and England, with the hopes of ensuring continued peace. What she discovers instead is an insidious plot by Cardinal Richelieu, the political power behind the French throne, to create a grand alliance of nations. The alliances sole goal is nothing less than the elimination of the Confederated Principalities of Europe and the Americans in particular.

Now with war on the horizon and his family and friends scattered across Europe, Mike Stearns and the Swedish king will have to unite their fledgling confederacy of states and rely on every resource they can get their hands on. From the army of the irascible Frank Jackson, to the still developing Ironclad Navy led by Admrial John Simpson, Stearns' former political rival, to the surprising introduction of a new American Air Force, led by Col. Jesses Woods and Down-time born Hans Richter. But the greatest support that Gustavus and Mike might have is in their most dangerous ally. The Iron Lady of a new Germany, Gretchen Richter, a former camp follower who has become the voice of the Committee of Correspondence, a "radical" pro-democracy organization that frightens its allies almost as much as its enemies. With a world war on the horizon, it may be in the radicals that a new German and American future could be forged.

This book is truly is a hidden gem of the series. When compared to the uniqueness of the original concept introduced in the first book and some of the wilder and more steampunk developments that occur later on, 1633 would appear on the surface as mostly pretty tame. But where this book succeeds is in its capacity to beautifully build up plots and subplots and seamlessly interconnect them, utilizing every character introduced to spectacular effect. The novel has little to no fat on it, wasting almost nothing it creates, which is tremendously refreshing. Even the stuff introduced that doesn't reach full narrative maturity is referenced by another subplot or builds up to future ones. The Tower of London subplot is perhaps the best example of this.

At the same time, the book is not afraid to kill of its characters, sometimes in truly graphic ways. The Battle of Wismar represents a sea-change in the franchise, and fundamentally transforms the entire landscape of the story and its narrative focus. Through the deaths of two characters and the maiming of a third, the entire series shifts, leading to the spectacular stories of 1634: The Baltic War, which concludes the world war arc, and 1634: The Bavarian Crisis which helps flesh out the political difficulties of the Confederated Principalities and the nation which results from the Battle of Wismar.

Of the characters introduced in the series, I would have to say that Admiral John Simpson and Col. Jesse Woods are by far the most interesting. Simpson played something of a secondary antagonist in 1632, representing the more conservative and closed-minded members of the Grantville community. In 1633, Simpson begins to transform into a secondary protagonist of sorts, a role he will continue to have in 1634: The Baltic War. Jesse Woods is a character introduced in 1633 as the re-inventor of the airplane and the founder of this universe's first Air Force. He gives off a personality totally different from Jackson or Simpson in terms of military protocol and procedure and his relationship with Hans Richter sets the two of them on a truly tragic path as the Battle of Wismar approaches.

The Tower of London and Dutch Republic subplots play a relatively minor role in 1633, mainly being used to build up short stories in the Grantville Gazettes and later books in the series, such as The Baltic War and A Parcel of Rogues. And Gustavus and his daughter's plot interweaves the others rather subtly until the end of the book, following the fallout of the Battle of Wismar, though Christina will play a medium-sized role in a romance plot in 1634: The Baltic War as a result of what happens to her in 1633.

While this book might not be my favorite in the series, due to the fact that it largely builds up plots without actually resolving them, some of the elements introduced in this book could easy be considered my favorite. The fundamental theme and plot of the book, that being the precise nature of what the Confederated Principalities will be and the Americans place in that is absolutely answered and in spectacular fashion I might add.

I think 1633 is really where Eric Flint masters the narrative devices that he will utilize and demand from fellow authors in the succeeding books of the franchise. While 1632 may have started the series, 1633 is where it coalesced into its final form.