Omega Boost: Polyphony's One and Only Mecha Shooter 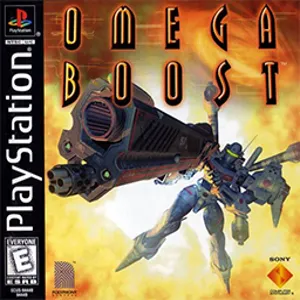 I think it's safe to say that almost everyone loves the idea of giant robots in theory. Say what you will about the Mecha genre as a whole, but it's hard to deny the cultural impact it's had on the world, especially when it comes to interactive media. Though while on the tabletop, games like Battletech and Mekton were showing a strong showing, unless you were willing to put up with what few licensed games were out there for series like Mobile Suit Gundam (or had the money and patience to import such titles from Japan), you had pretty slim pickings for getting your Mecha fix. Pretty much your only options back then for good games were either Armored Core or MechWarrior, with the latter still being a licensed game. That was, except, for one particular oddity that came out in '99.

That game was Omega Boost.

Omega Boost is quite the curiosity of a title. For one, it's an original mecha game on a system that was primarily the home of licensed titles like MechWarrior, Gundam: Battle Assault, and the phenomenal Super Robot Wars series. Second, it's a title with design work done by one Shōji Kawamori, a name Mecha diehards will recognize for his work on the Macross franchise, as well as The Vision of Escaflowne, Space Battleship Yamato, Patlabor, Eureka Seven, and many others. The man's even dipped his toes into Mobile Suit Gundam, Cowboy Bebop, and Ghost in The Shell. Designers like Kawamori get around. But perhaps most interestingly, this game is a Rail Shooter by Polyphony Digital, the studio that before and since this had exclusively made the Gran Turismo games. It even runs on the exact same engine. At sixty frames per second. On the PlayStation. All these elements put together combine to make arguably one of the best Eastern-styled Mecha titles of its day, if not of all of gaming.

But, I'm getting ahead of myself. Let's start with the story.

The story in Omega Boost is pretty standard for its genre. Since an unknown time, a mysterious AI named Alpha Core's been peacefully coexisting with and influencing the development of humanity. Things are good for a while until humanity had become more aware of Alpha Core's existence. And of course, humans being humans, we are naturally terrified of this. So instead of trying to make contact with this intelligence, we decide to do the natural response and attempt to destroy it! This, of course, causes Alpha Core to become fairly cross with mankind, and he decides to wage a war that lasts into the far, far future. Then, a crack team of scientists devises a way to stop Alpha Core by way of time travel...only for Alpha Core to steal that technology and plot to go to 1946 to hijack ENIAC (which the game erroneously calls the world's first artificial intelligence, when it's in actuality the first-ever programmable computer) to ensure his domination of the world. Thus our player character, Lester J Hemming, suits up in the eponymous giant robot to go back in time and prevent this bad future from happening with the power of a vacuum tube.

So in short, it's like The Terminator, but instead of preventing Sarah Conner from dying, you're plugging in a dongle to stop Skynet from going apeshit.

Let's talk about the gameplay! 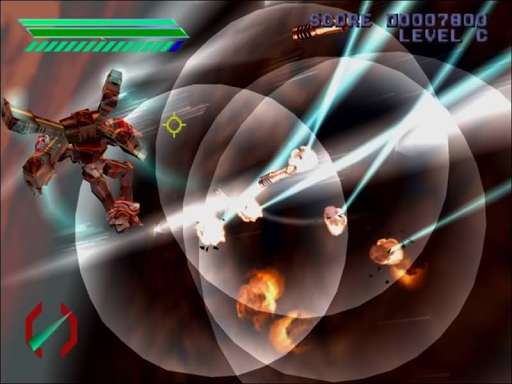 As stated in the prelude, Omega Boost is a rail shooter. Think Panzer Dragoon, but instead of a dragon, you have a giant robot. This particularly apt, considering that one of the programmers, Yuji Yasuhara, also worked as a programmer on Panzer Dragoon Zwei! As such, the controls are nice and straightforward. Two fire buttons, a dash button, as well a button to brake and strafe enemies. The button you'll see the most use of by far, however, is the Scan button, which will snap you to the closest enemies on screen. You'll need this because enemies come in quite tight formations, and they come at you fast. Thankfully, much like Panzer Dragoon, you have the handy feature of being able to lock onto multiple enemies at once and blast them down in one clean shot, complete with a lovely sound to boot. And if you have enough of a meter built up, you can perform a Viper Boost, becoming invincible for a brief time while you ram into everything on screen with reckless abandon. From there, you're off to the races, shooting down wave after wave of ships, drones, and enemy mechs galore. It's got that nice arcadey feel to it, especially with most stages having a sub-boss and an end boss.  It's nice and simple.

Most of the stages are pretty simple. Mostly linear with the enemies coming at you in tightly packed waves, though as mentioned previously, these waves come in *fast*. If you're aiming for a good rank after every stage, you'd best get used to maxing out your target locks to make the best use of your homing shots. Even then, you'll still have to have a good trigger finger to get the ones your lock-on *doesn't* catch. Thankfully, most of the enemies you blast down are pretty easy, though it does ramp up slightly in the latter half of the game. I'd argue the game gets significantly *harder* from the second stage onward. It's fairly doable...up until you get to the fifth stage. The final stage, naturally, is the hardest of the lot. While a more generous person would say the final stages turn the mechanics on their head, I more feel it turns the tactics you've learned entirely against you, to the point you have to consciously adopt a different strategy if you want to succeed.

But, before I give my final thoughts, let's take a minute to appreciate the music. The main soundtrack is 15 tracks long, and we have a pretty nice selection of songs here. You got Drum and Bass, Techno, Hard Rock, even some Breakbeat in there. It's all pretty lovely. I'm especially a fan of Zone 3 and 4's main tracks. We even get a track that's a shout-out to "Poundcake" by Eddie Van Halen, right down to having a drill on the guitar. Some of these tracks have lyrics too, though good like trying to decipher them without having the actual soundtrack. Perhaps most interesting of all is how in each of the regions it was released in, there are different licensed tracks for each of the game's title, credits, menu, and boss themes. In the US, we have "Fly" and "The Road by Loudmouth, with Ostegolation by Static X for the Menu and Final Boss themes. In Japan, "Shade" by Feeder is the title and final boss theme, with "Izmir" by Dip in The Pool is the Credits theme. PAL honestly got the short end, having "Dreamer" by Cast for all themes here. While it's far from a bad song, it's a bit more folk-rock than the other versions' more punk sound.

All in all, Omega Boost is something of an anomalous game. It wasn't marketed terribly well when it came out, and critics were mixed. Having got as far as the final stage as of this review, I can honestly see why. The game is fairly short in its main mode, and the difficulty curve is very arcade-like. I don't feel like it's quite as impenetrable as a lot of arcade games typically are, but it's quite telling how the game gives you not only 5 lives, but the aforementioned Viper Boost gets a significant charge between stages. Though as with any arcade-style game, such a reliable way of getting out of harder segments of the game gives you a black mark on your rank. In spite of all this, I think this is a pretty good game that never quite got the spotlight it could have. While it's not perfect. its eclectic combination of music, mechanics, and aesthetics stuck in my mind, even decades later. If nothing else, I highly recommend giving it a play. You might find yourself liking this oddball of a game.

Posted by AdamTheHedgehog at 10:30 AM