Could Sonic work in an Open World style game? 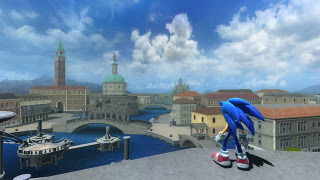 Open world style gameplay is one that Sonic has never officially tried beyond hub worlds. Many fans ask for it, and several others have questioned if it would work. So, may as well throw my hat into the ring. Click "read more" if you'd like to know my take.

On paper, this concept makes perfect sense. Let the player take full advantage of Sonic's speed in a large, open world environment. Even fans made a demo with their own Bumper Engine to show off how it could world.
I can easily see where they are coming from. Every open world game I've played has the same obstacle to deal with as far as traveling the map at an acceptable pace. Usually fast travel or vehicles are used to this. However, with Sonic's running speed, simply moving around the map can be half the fun. This was sort of done with the hub worlds of Sonic Adventure and Sonic 06; but those were small and had little to explore.

The biggest problem that comes to mind is the fact that with the high speed, there would have to be a lot of empty land and exploration, (which is a big part of open world games) would take a hit in quality. Combat has also always been light with Sonic, with a few exceptions and there are only so many challenges one can base around speed, so the traditional mission based open world wouldn't work that well without re-designing Sonic.
There are other ways to implement open world gameplay. Using a fan game called Sonic Utopia, I can demonstrate an open world game that is still level based with a goal to find.
I am not interested in heavily critiquing a free to play fan game. It is unfinished, but well made and worth trying at least once, that is all I will say. That being said, Utopia does help me explain a certain problem. If there is one set goal to reach, then that really hurts replay value. Any need to explore is gone once you know where to go and the stages become more linear. Now, in theory, one could add collectables, challenges, or various secrets to keep the need to explore. But, how well does that type of gameplay still hold up?
Do not think this is me trying to say that the open world idea would not work, clearly from these fan games there is fun to be had, I am just trying to say that the concept is more complicated than one may think.

This is the part of the article that is less about debate and research and more about me fanboying. Skippable.
In my personal opinion, what would work best is a combination of an open world environment and the traditional levels. Have the large open world in place of the hub world and make it where you actually need to run to each new level instead of warping there. Inside said world, there is plenty of space to mess around with momentum based speed like the Bumper Engine instead of the Boost format and have missions that unlock power-ups. A very important thing about optional side missions is having real motivation to do them, so instead of an emblem or red ring, earn a special currency or experience that unlocks new items that allow more gameplay similar to Sonic Adventure.
Another idea is taking a page from Sonic Forces and a callback to the freedom fighters, let Sonic liberate areas in the world as a war with Eggman rages on. There can be fighting everywhere and you must utilize Sonic's speed in order to travel to conflicts that seem to be in the most need of help. The more of this you do, the greener the world around you becomes.
But, I doubt the marketing team would ever care what I think.

As a whole, I feel like this is a type of gameplay that Sonic should try out despite any complications it may have. Sonic has done almost every other genre of game from platformers, RPG's, minigame collections, fighting games, racing, and even edutainment games. So, why not give open world a try? What do you think on the topic? I would love to know in either a comment or a post on our forums. Until next time, this is Ghost Ranger, signing off.
Posted by Cendoo at 12:00 AM