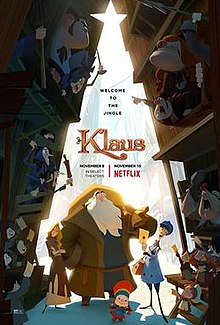 I hope everyone had a wonderful holiday and are excited for the new year.

As has become a custom for the end of the year, my December vacation block has been book-ended with a review or article covering some form of media regarding the holidays. Last year, it was an analysis of the Ranken-Bass Christmas specials and their shared connective universe. This year, I decided to go a little easy on myself and simply do a review of what I am sure will be a future Christmas classic.

The holidays are often inundated with new Christmas-themed movies, usually from the Hallmark channel or made in a similar vein. These films usually come and go with very little fanfare and the rise of streaming services over the last three years has only made this more prevalent. Most Christmas movies pass under the radar or are forgotten altogether, leaving me hungering for a new Christmas IP that would actually manage to stand alongside Christmas classics.

Luckily, today's article is on such a film. Released on Netflix in 2019, Klaus was an extraordinarily well-produced and enjoyed film, and I genuinely believe that it will quickly become a Christmas regular if people continue to watch year after year. It's still early, but I have little doubt in its future classic status.

My confidence is born of my general opinion of the film, which you can read down below.

In Norway, sometime in the 19th century, Jesper Johanson is the spoiled and privileged son of the Royal Postmaster General. Desperate for his son to make something of himself, Jesper's father sends him to the worst performing branch in Norway, the distant and isolated town of Smeerensburg with a simple task. Deliver only 6000 letters in a year, with failure resulting in his disinheritance.
Banished to the frozen norths of Smeerenburg, Jesper learns that his job will be even more difficult that just the isolated location. The people of Smeerenburg are obsessed with feuds and all hate each other or in the case of the local schoolteacher, Alva, given up hope on the town's survival altogether. No letters are sent, and Jesper's efforts only make him more disliked by a community not interested in getting along and talking to each other.
As a last resort, Jesper makes an acquaintance with a lonely woodcutter named Klaus, who enjoys making toys but has no one to share them with. After a series of hilarious hijinks, Jesper devises a plan. The children of town will right a letter to the mysterious toymaker, give them to Jesper who will deliver them to him and then help deliver the toys. Along the way, Jesper begins to add little bits to the legend of the northern toymaker that sends the town of Smeerenburg into a strange transformation in order to "get on the nice list", though these efforts on despised by the two largest feuding families.
As Jesper's time in Smeerenburg is running out, will he be able to make a lasting impact on Smeerenburg and maybe even help a lonely woodcutter as well?
***