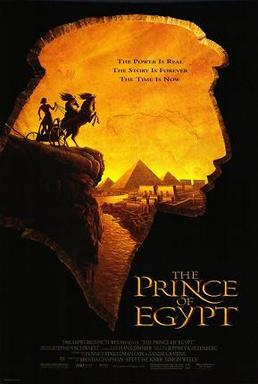 I grew up in a deeply religious household, as I'm sure I've mentioned a few time in these articles. As such, I was often watching films of a religious nature in my house, especially around the holidays. Obviously, films like King of Kings, The Greatest Story Ever Told, and The Ten Commandments were always on the television throughout November and December. It was almost unavoidable, though at least the films were actually pretty entertaining to watch. But every so often, my sister and I would get a treat and a chance to watch a religiously-inspired movie that was animated and far better than the drier and more "epic" scale films that tended to get seen.

I am, of course, talking about DreamWorks Animations 1998 animated musical The Prince of Egypt. Now I've talked about this film several times in various countdowns or editorials over the last few years but I've never actually sat down and given my few opinion on the film on its own merits. This is an oversight that I feel is greatly in need of correction, especially given the holiday season.

Yes, I do realize that this movie is more of a Passover movie than a Christian holiday movie, but I did not feel like waiting until next April to review this movie and its prequel (tune in next week ;)). So this is what you all are getting. A nice look at one of DreamWorks Animations most highly regarded traditionally animated movies.

Is it worthy of the hype and does it stand up to films like The Ten Commandments in terms of adaptation of its source material?

Adapted from the biblical story of Exodus, The Prince of Egypt tells the story of Moses, an Israelite who was saved from executionas a child by his mother and raised as a Prince of Egypt alongside his adoptive brother and future Pharaoh, Rameses. Moses' people are enslaved by the Egyptians and after an incident where Moses kills a man while defending a slave, he goes into exile and becomes a shepard.
Many years later, Moses is called by God to return to Egypt and free the Israelites now under the yoke of Rameses. Now the two adopted brothers find themselves on opposites sides of a theological fight, with the lives of both Egypt and Israel hanging in the balance.
***