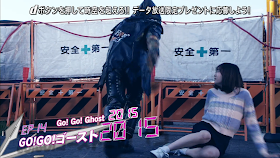 Zi-OIKS! Sougo's a ghost! How is he going to recover from death in this episode of Kamen Rider Zi-O?  (Click on "Read More" to read the full article.) 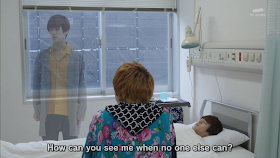 This episode opens up with Tsukuyomi and Geiz watching over Sougo at the hospital.  Geiz doesn't look very happy to see Sougo is in that state, so he blasts off to the year 2015 to put a stop to Evil Ghost, to see if it'll stop him and save Sougo.  Takeru pops into the hospital and tells Sougo's Ghost that the reason why he can see him is because his Kamen powers lets him see ghosts.  Sougo doesn't want to do nothing, so he has a plan but the first step requires going back in time.  Takeru is very surprised to hear that time travelling is possible.

IT'S HENSHIN TIME, BABY! Geiz meets up with Evil Ghost in the year 2015 and morphs into Kamen Rider Geiz, then powers-up into Ghost Mode.  The Time Jackers catch wind of this and they send in Fake Rider into the battle, where he also powers up into Ghost Mode.  Am I seeing things correctly? Three ghosts?  Yes I am and the two evil ones gang up on Geiz.  Geiz is defeated and Fake Rider takes Geiz's ghost medallion and sucks the power out of it.  Fake Rider then leaves Geiz a mysterious item and then he and Evil Ghost take off. 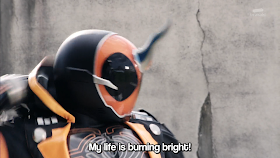 Sougo and Takeru blast off to the year 2015 and change time by making sure that the steel beam accident doesn't happen.  Sougo awakens at the hospital in 2018 (back from the dead) and he gets told off by Woz for foolishly changing history.  Takeru is still in 2015, where Uhr uses the power of the ghost watch to summon minions to attack Takeru.  Makoto (another Kamen Rider) jumps into the battle, where he and Takeru have their powers back.  Takeru and Mokoto transform into Kamen Rider Ghost's and beat up the minions.  None of this matters, Uhr freezes time and creates Evil Ghost anyway.  This means that Sougo is dead again and while he is dying, Woz reveals that he had been working with the Time Jackers.

Takeru and Mokoto lose their powers and Sougo's Ghost gets warped back to 2015.  Back in 2018 at Zi-O HQ, everyone is worried about Sougo, all while Sougo's Ghost is in the background.  Takeru and Narita show up and use a special item that makes Sougo visible to all, while also saving money on the special effects budget.  Takeru explains everything and our heroes blast off back to 2015 but they get ambushed by the Time Jackers during mid-stream.  (That's they got attacked while they are jumping though time.)  Everyone lands in 2015 and we get a big robot battle featuring awkward CGi robots.  Our heroes defeat the Time Jackers after a surprisingly decent fight. 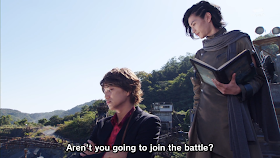 Sougo and Geiz catch-up with Evil Ghost and then transform again.  Evil Ghost has a new trick up his pants jacket and summons some minions to join in on the fight.  They are not the only ones there, Woz and Fake Rider are watching the fight.  We get to see a new form of Zi-O, he uses the armor ability to change himself to Decade Mode, while Geiz transforms into the familiar Faiz Mode.  Remember that item that was given to Geiz? Well, Sougo has it and it turns out that it's a special morpher that mixes in two different armors to make one super special one.  (YYYEEEEEEESSSS!!!! I was hoping that they'd introduce this element into the show. WWWOOOOOOOO!)

Sougo uses the special transforming device with the Build medallion to create Kamen Rider Zi-O Decade x Build Mode (I'm not going to say that again).  Evil Ghost uses the souls he had consumed to make himself even more powerful but this isn't enough.  Zi-O blast at Evil Ghost with his sword, a sword that can shoot out many different Kamen Rider attacks.  Zi-O then switches the Build Medallion with the Ghost one and finishes off Evil Ghost with an ultra spectacular finishing mode.

The day has been saved. Evil Ghost has given up the ghost. Mika's brother is still alive.  Sougo is back from the dead again.  Every one is back at Zi-O HQ and they get a huge surprise.  Fake Rider is there and reveals himself to be Kadoya Tsucasa.  Kadoya then takes Sougo's picture and tells him that he'll destroy the World before Sougo will have the chance to be king.  OOOOOHHHHHHHHH!!! 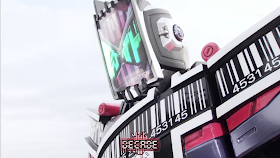 This second half of the Ghost crossover did not disappoint.  Sure, this second half of the story was a bit more cooled down and slower paced that its prior part (the previous episode) but it didn't ruin the overall flow.  It is still a well paced and balanced story that's quite interesting and entertaining.  I did enjoy how this episode not only pushed this crossover forward, it also pushed the entire Zi-O saga, giving us much needed story progression and reasons to keep tuned into the show.

The only thing that I didn't like about the story was that the whole Ghost Sougo plot was very short, they could've done a bit more with it.  This plot did also create some very bizarre moments, like how Sougo's soul could travel between time depending if Sougo's body was awake or not.  But hey, this isn't a show that is supposed to be 100% logical, it's a superhero show that's filled with incredible and fun adventures.  Although, it did stray a little bit too far into the baffling zone but it did quickly recover.

The characters are still continuing to grow.  It's good to see that whoever makes this show are fixing the problems that were found in the earlier episodes.  I'm also really enjoying that Fake Rider is here to stay.  Zi-O also gets a new mode in this episode that allows him to merge two medals together to create a new crazy looking Kamen Rider form.  I would've preferred that this new power was introduced a few episodes ago but I am glad that it was introduced before it was too late.  This new power opens the show up for even more crazy and interesting fights. 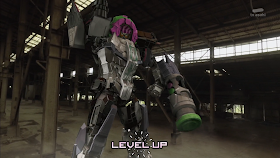 The creepy looking CG robots are back and surprisingly, they were used very well.  They looked a lot less creepy and that was due to how they were used in environments that helped them not to clash with the live action sets in an awkward way.  There was even a really good fight scene involving the robots.  The rest of the action was okay, they were more entertaining for adding to the story rather than looking good.  Speaking of looks, Zi-O's costumes are starting to look way too over the top, I'm mainly talking about the Decade costume and how it looks like that it has too much character...  That's not a complaint.  I'm really enjoying it.

Overall, a really good episode.  The same can be said for the story-arc as well and I'm really happy to see that this show is finally getting back on its legs.  I'm giving this episode an 8 out of 10.  The story-arc as a whole is also getting an 8 out of 10.  Zi-O's best storyline so far.  (A sentence that I'm probably going to repeat with story-arcs to come.) 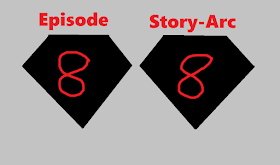